In the past three days a number of adverts have been taken down from the site, including taxpayer-funded Government-backed adverts flooding Tory targets. 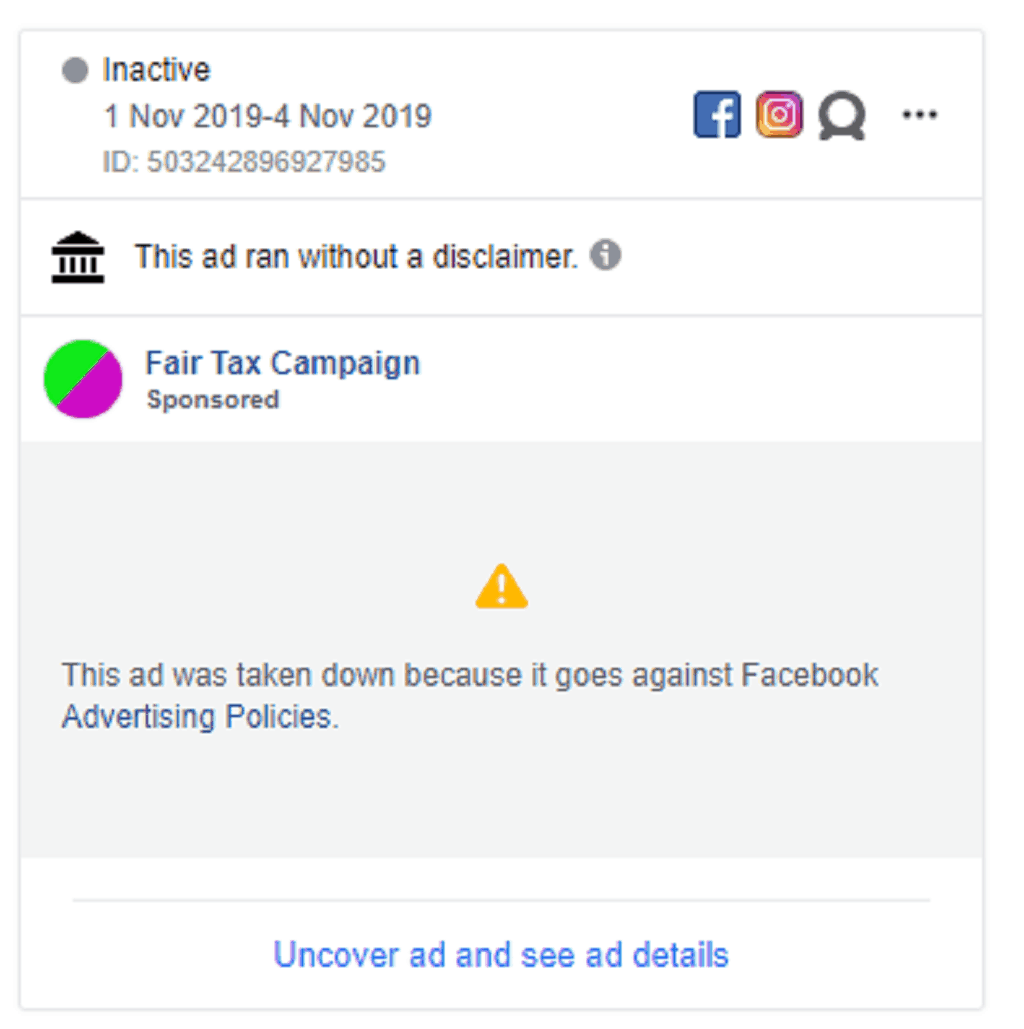 We reported how Facebook removed Conservative ads that had doctored what looked like BBC headlines to exaggerate Boris Johnson’s funding pledges to schools which will not even take them back to where they were a decade ago.

Facebook has faced more calls to ban all political advertising ahead of the forthcoming General Election, after more misleading ads were taken down from the platform.

The social network’s rules require all political advertising to be labelled, so users can get information about who paid for them.

However, in the past three days several adverts have been taken down for being incorrectly labelled, including some paid for by the Government.

Ian Lucas, an outgoing member of the Department for Digital, Culture, Media and Sport (DCMS) sub-committee on disinformation, said: “I think it’s very difficult to see how Facebook can adequately prevent misinformation.

He said: “I think they are going to see a considerable number of complaints about misleading advertising throughout this election, and it does concern me – it’s an issue I have seen growing.

“One of the big debates we are having is around targeted ads. The danger of these adverts is being dismissed.

“Removing political adverts is the right decision for democracy.”

One advert taken down in recent days was published by a page called the Fair Tax Campaign, a lobbying group run by former Boris Johnson aide Alex Crowley.

The sponsored advert asked: “Could you afford an extra £214 each month? That’s what Labour’s tax plans would mean for EVERYONE.”

However, Labour has yet to publish its tax plans or manifesto ahead of the election.

We also reported accusations of misusing public money to flood Tory target seats with ads promising spend from the Government.

They went live on the day the General Election was announced.

Unlike traditional advertising, there is no way of regulating what is said on targeted Facebook ads.

These ads only appear in specific newsfeeds for profiles they are targeting.

If they are not correctly labelled political adverts – as was the case with both the Fair Tax Campaign and My Town adverts – it is difficult to know who is seeing them.

After the Fair Tax Campaign ad was removed, Conservative Damian Collins, who chaired the DCMS sub-committee, tweeted: “First strike in the campaign against sketchy political ads on Facebook.

“People shouldn’t be able to place political adverts online if we can’t see who is paying for them. The same rules that apply offline should apply on the internet.”

#ToryStory has gone viral as Brits started sharing heartbreaking stories of the impact of a decade of Tory austerity on their lives on social media.

The Conservative Party went viral too with one of their videos, but not in a way they might have hoped to.

The Tories have been accused of unfairly editing a video of  Labour’s Sir Keir Starmer, to make him appear unable to answer a question on Brexit.

The word “doctored” began trending in the UK as people used Twitter to criticise the Conservatives’ use of the clip.

In the minute-long video posted on the party’s Twitter account, Sir Keir is questioned on ITV’s Good Morning Britain by Piers Morgan and Susanna Reid over Labour’s Brexit policy.

Piers Morgan was among those to criticise the edit.