“Who’s Lorraine? Lorraine is a legend!” The PM was told. 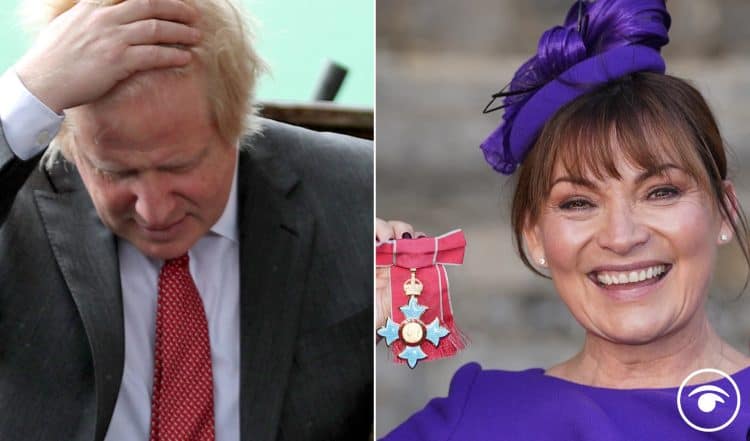 Reid, 51, interviewed Mr Johnson at 10 Downing Street, marking his first appearance on the ITV breakfast show since 2017 when he was foreign secretary.

During the interview, Reid challenged him about the impact of the cost-of-living crisis and also asked why he will not resign over the partygate scandal, breaking the law and following accusations that he misled Parliament.

As the robust interview came to an end, Reid referenced ITV’s Lorraine, which airs after GMB, to which Mr Johnson asked: “Who’s Lorraine?”

“Who’s Lorraine? Lorraine is a legend!” Reid fired back.

Kelly previously made headlines when she won a £1.2 million battle with HM Revenue & Customs (HMRC), with a judge saying the Scottish star “presents a persona of herself”, agreeing she was not an ITV employee and instead was hired to perform “the role of a friendly, chatty and fun personality”.

Reid went on to tell Kelly it had been “fascinating” talking to the Prime Minister, saying: “I’m surprised I haven’t been thrown out, Lorraine. It was remarkable speaking to him.

“Look, it’s been almost five years since Boris Johnson has appeared on Good Morning Britain, and of course just over two of those years he’s been Prime Minister”.

During the interview, Mr Johnson said he is “getting on with the job”.

Reid also asked him if he is honest, to which he replied: “I think, you… yes. And I think that the best way to judge that is to look at what this Government says it’s going to do and what it does… and that’s what matters.”

He added: “I do my best to represent faithfully and accurately what I believe. And sometimes it’s controversial, and sometimes it offends people, but that’s what I do.”

Kelly later thanked viewers for their messages and said: “Why should he know who I am? He is busy in the morning. He wouldn’t be watching us, although he could learn a lot, as you know.”

She added: “Lots of people have said that he has lost votes. He hasn’t lost votes just because he doesn’t know who I am. But very, very, very funny.

“And lots of you saying that all the civil servants working from home will be going ‘eek’ because they are all watching the show.”

Kelly’s on-screen break came in 1984 when she joined TV-am, and since then, she has become a familiar face on the small screen. She has presented her hugely popular daily talk show Lorraine since 2010.