Carr joked about the horror of the Holocaust, saying "no one wants to talk about the positives". 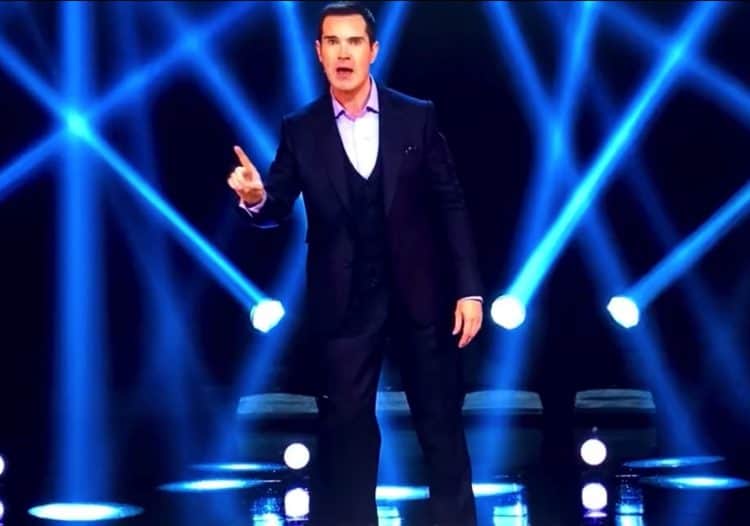 Jimmy Carr has been criticised for a “truly disturbing” joke made about the travelling community and the Holocaust in Netflix special His Dark Material.

The comedian, known for his stand-up and roles on shows like 8 Out Of 10 Cats, issued a “trigger warning” to the audience at the beginning of his one-hour special, admitting his performance contained “terrible things”.

In a widely-shared clip from the show, Carr joked about the horror of the Holocaust and “six million Jewish lives being lost”.

In a tweet referencing the joke, The Traveller Movement – a charity supporting the traveller community in the UK, said: “This is truly disturbing and goes way beyond humour.

“We need all your support in calling this out #StopTravellerHate @StopFundingHate.”

The charity have now launched a petition to Netflix calling for the “removal of the segments of His Dark Material which celebrates the Romani genocide”.

In a synopsis of the programme, which aired on Christmas Day, it says the special features jokes which are “career enders”.

Similarly, not-for-profit organisation the Holocaust Memorial Day Trust shared a statement on Twitter from their CEO Olivia Marks-Woldman who was “horrified” to hear “gales of laughter” following Carr’s remarks.

Karen Pollock, chief executive of the Holocaust Educational Trust, added on Twitter: “These comments from Jimmy Carr are beyond tasteless.

“The targeting of Roma and Sinti during the Holocaust is no laughing matter. Deeply offensive. I also don’t understand how this was aired @netflix.”

Hope Not Hate, the anti-fascism and anti-racism campaigning group, also condemned the comedian’s joke on Friday.

In a tweet, they said: “Comedy is an amazing tool for progressive change and it’s such a shame that @jimmycarr decided to use his platform to celebrate the murder of one of the most marginalised groups in society.”

The Auschwitz Memorial called for Carr to “learn about the fate of some 23 thousand Roma & Sinti deported to Auschwitz” in a tweet to their 1.2 million followers.

They added: “It’s sad to hear words that can fuel prejudice, hurt people & defile memory of their tragedy.”

Sharing a statement on Twitter, the charity Friends, Families, Travellers has said it is “disgusted and outraged” by the comedian’s comments, adding that murder is “no laughing matter”.

A representative for Carr has been contacted for comment.

Related: ‘Ambushed by a beer?’: Johson snapped drinking at No10 bash by his taxpayer-funded official photographer