The clip was filmed in 2018 as part of a three-part documentary on the US embassy called Inside the American Embassy. 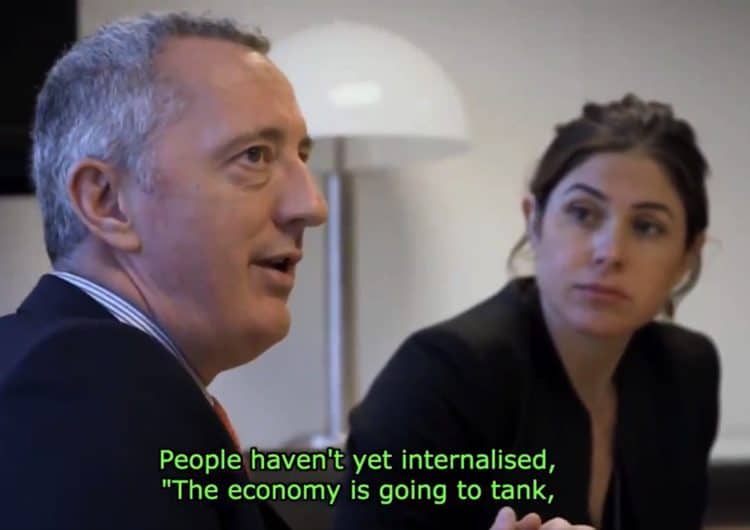 A Brexit assessment presented by the US embassy in London has been making the rounds on social media as their grim forecasts started to play out as predicted.

The clip, which was filmed in 2018 as part of a three-part documentary on the US embassy called Inside the American Embassy, features Thomas Williams, minister counselor for political affairs, and Seneca Johnson, deputy head of economic affairs.

In the video, he addresses Michael Huerta, head of the federal aviation administration, in a discussion about how US airlines will work within the US in the event of Brexit.

“The economy is going to tank”

“People haven’t yet internalised, ‘The economy is going to tank, I better sit on my cash,’” he began.

“The EU 27 says, ‘We’re a club, here are our rules, you tell us how many of the rules you’re prepared to accept, and we’ll kind of tell you where in the clubhouse you can go.’

“That is not the British conception of what this is at all. They sort of see it as a negotiation between two equal parties.

“But the British government is not interested in telling people, “You know, this thing that 52 per cent of you said that you wanted, here are the range of options: there’s less good and then there’s very, very bad”.

“They haven’t actually done a lot of macroeconomic modelling of this, almost, like, deliberately.

“Like, “We don’t want to know! Because leaving is going to be great, and it’s what people voted for, so let’s not spend government money on analysis that suggests that maybe people got it wrong”.

Seneca Johnson, piled on the pressure with her own analysis of what the economic environment is likely to look following Brexit: “Growth is starting to slow down but what we’re probably going to see is a longer term slower slide of lower economic growth.

“Inflation went up from 0.5 per cent to 3 per cent, so it’s quite a significant increase and that’s not inflation from a growling, bubbly economy. That’s inflation from an outside shock – that’s the worst kind of inflation.

“That’s going to be a problem. This is coming at the end of a long period of austerity; people are very, very tired of it, they’re very frustrated by it.

“And some of those longer term economic issues are some of the things that fuelled Brexit. So if Brexit ends up not helping them, or not obviously helping people economically, that could have political knock-effects.”

Political pressure on the government

Johnson went on to add: “If the economy sinks, then that’s going to put political pressure on the government.

“And for the people that voted to leave, they are terrified because this is something they’ve been fighting to achieve for almost 40 years. It’s a generational struggle. They’ve now won, and they’re absolutely terrified.”