"So his little notes didn’t work then? Shame," wrote one person after Jacob Rees-Mogg appeared to have totally changed his policy. 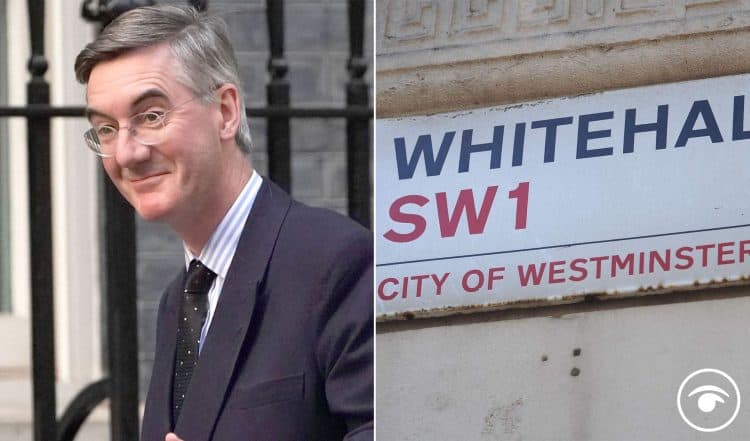 Jacob Rees-Mogg is planning to sell off £1.5 billion worth of Government premises in central London as he continues his campaign to make civil servants return to the office.

It comes as his own efficiency savings have come under the spotlight.

A few months ago he went around offices leaving notes to people who weren’t there as he ghosted through the corridors of Whitehall.

The former Commons leader came under fire from culture secretary Nadine Dorries for his “Dickensian” tactics after he left these calling cards in “deserted” Whitehall workspaces and wrote to Cabinet ministers urging them to coerce staff into a “rapid return to the office”.

The FDA union which represents senior civil servants branded the approach “crass” and “condescending”, accusing Mr Rees-Mogg of damaging morale among the workforce.

Now his new strategy to get people back to the office is to, wait for it, sell the offices.

The minister for Brexit opportunities and government efficiency told The Sunday Telegraph taxpayers should not have to “fork out for half-empty buildings”, adding that expensive office space had been “under-utilised”.

However, it was not clear to what extent the initiative outlined by the minister in the Telegraph article was new or part of the existing Places for Growth programme which was announced by the Cabinet Office in June.

More than a few people found this decision baffling:

Who can argue with this point?

However, how well is he doing on his on efficiency savings?

Well, according to the Mirror the efficiency minister Jacob Rees-Mogg spent over £1,300 on travelling to Wrexham’s Racecourse Ground in a chauffeur-driven limousine.

Details of the trip on 21 July obtained by the papers showed that he spent £1,332 of taxpayers’ cash travelling to, from and around Wrexham.