One pawnbroker had to turn customers away because demand was so high that they ran out of money. 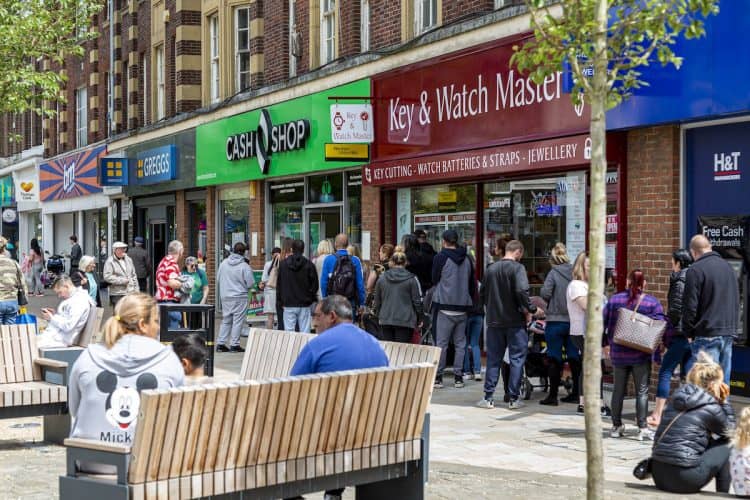 Hundreds of hard-up Brits have been queuing up at pawnbrokers shops to cash in their £150 council tax rebates because they cannot afford to wait for the money.

Yesterday, one pawnbroker had to turn customers away because demand was so high that they ran out of money.

People have been queuing outside the Cash Shop in Rotherham, South Yorks,. in recent days.

The store charges 7.9 per cent commission and a £2.99 handling fee leaving those cashing in a £150 rebate cheque with around £135.

More than 50 people were seen queuing outside the Cash Shop on Wednesday after 200 people were reported there the previous day.

But yesterday they told customers to come back later if they wanted to cash in a cheque as they had no money left.

And other pawnshops in the town centre had erected signs that read: “We do not cash cheques.”

The money is being dished out by local authorities to the most hard-up households to help with the cost of living crisis.

For those who do not pay their council tax through direct debit, a cheque is issued instead.

But some of those waiting in line said they couldn’t afford to wait days for a cheque to clear through their bank.

Terri Sykes, 34, from Maltby, went down to the shop to cash the cheque in and gave up when she saw the queue.

She said: “They’ve sent it to my partner even though I’m the one who does all the finances and he doesn’t have a bank account.

“We’re in the middle of moving house so I haven’t got time to queue, it is a mess.”

Carly Stubbs, 32, from Dinnington, queued up outside a Ramsdens pawnbrokers. She said: “I’ve been down three times now and each the queue is a mile long.

“I’m with Monzo so there isn’t an in-person bank, you have to send it off and it takes weeks.”

Aaron Parker, 39, told a local radio station that his bank had shut his local branch so would have had to walk seven miles to Sheffield to cash it into his bank.

He said he was desperate for cash as he had no gas or electricity and had been reduced to rummaging through bins for food on a night.

Aaron said the money from his council tax rebate would allow him to pay some bills and buy back his phone from Cash Convertors, which he had previously sold for £35.