Marches have taken place in Glasgow, and in hundreds of other places in the UK and around the world. 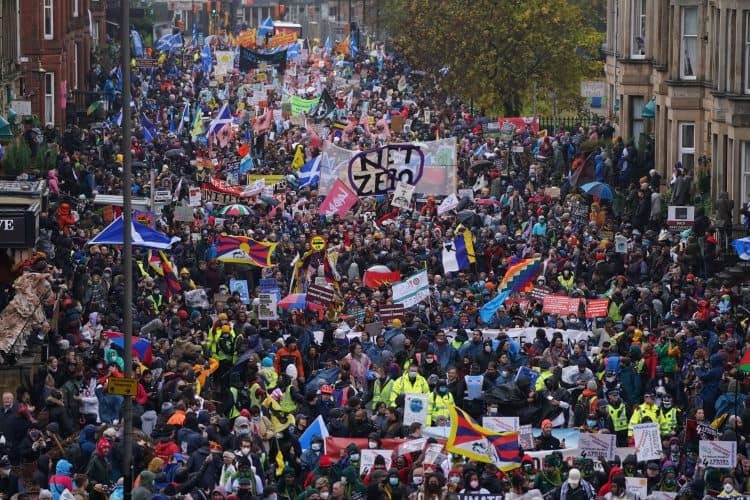 Tens of thousands of protesters have taken to the streets of the UK demanding stronger climate action from leaders in the midst of the Cop26 talks.

Protesters braved pouring rain and wind to march through Glasgow, where the UN climate conference is being held, while other marches are taking place in central London and in other cities around the UK and the world.

A fire engine, women covered in moss, Poseidon on stilts and a group of children guiding a display featuring what appeared to be a large snake wearing glasses, were among those who gathered at the starting point at Kelvingrove Park.

Jason Cook, 54, from Wootton Bassett, Wiltshire, said he and two friends were marching because they were tired of hearing “blah, blah, blah” from leaders on climate action, echoing the criticism of Cop26 and world leaders by campaigner Greta Thunberg.

He said: “We don’t want to hear any more blah, blah, blah.” The three men wore helmets, each adorned with a sign which said “blah”.

Dave Knight, 51, from Wiltshire, added there had been “lots of words, but we really need action – the end of fossil fuels as soon as possible”.

As the march entered Glasgow city centre a group of activists dressed as rats stood across the road holding smoke flares.

The group, who were acting as though they represented various sectors, were holding signs which, collectively, said: “When Cop fails, buy walls, buy guns, buy bombs.

Extinction Rebellion activists dressed as the Ghostbusters, along with a man wearing a sign that said “the end is nigh” were among the marchers making their way to Glasgow Green.

Hundreds of people lined the streets in support, some holding home-made signs.

Police refused to estimate how many people were marching, but organisers the Cop26 Coalition claimed more than 100,000 people had turned out despite the weather, as an estimated 300 events were taking place worldwide.

Asad Rehman, spokesman for the Cop26 Coalition, said: “Many thousands of people took to the streets today on every continent demanding that governments move from climate inaction to climate justice.

In London, thousands of protesters gathered at the Bank of England for the start of a march through the city, banging steel drums, chanting “one solution” and waving Extinction Rebellion banners reading “tell the truth”, before marching to Trafalgar Square.

Volkan Aran, 48, a project manager from Stoke Newington, north London, who attended with his daughter, Aylin, four, on his shoulders and his wife Psin Dumus, 43, said: “We don’t accept any delays, any further talking and debates, we just want everything to start happening now, because what they (politicians) are doing is very different from what they are telling us.

“They cannot fail us again, they cannot cheat us with their declarations and we want it to be happening now for this generation, it’s their future.”

Sophie Blake, 33, from Kentish Town, north London, who joined the protest with her two-month-old son Kit in a baby harness, said she wanted to show him that they tried to do something, adding: “I feel compelled as a human being and I feel a bit ashamed of the world that he’s going to inherit.

“The time for action has long passed, we need to make real efforts to cut global emissions right now.”

Climate protests have also taken place across the island of Ireland, with hundreds of people gathered at the Garden of Remembrance in Dublin for one of the main demonstrations.

In Northern Ireland, protesters congregated in Belfast ahead of a noisy and colourful march through the city centre before a rally at City Hall.

The marches come after thousands of youth activists, including Ms Thunberg and Ugandan climate activist Vanessa Nakate, marched through Glasgow on Friday protesting against investment in fossil fuels and failure to tackle the climate crisis.

The latest demonstrations come midway through the Cop26 summit, which has seen world leaders gather to set out the action they are taking and commit to curb deforestation, phase out coal, end funding for fossil fuels abroad and cut methane emissions.

But there is still a significant gap between the measures countries have committed to and what is needed to avoid more than 1.5C of warming, beyond which the worst floods, droughts, storms and rising seas of climate change will be felt.

Countries are under pressure to agree a process to increase ambition in the next decade, as well as deliver finance for developing countries to cope with the crisis and finalise the last parts of how the global Paris Agreement on climate change will work.