The Museum of Homelessness found that 1,286 people died while homeless across the UK in 2021. 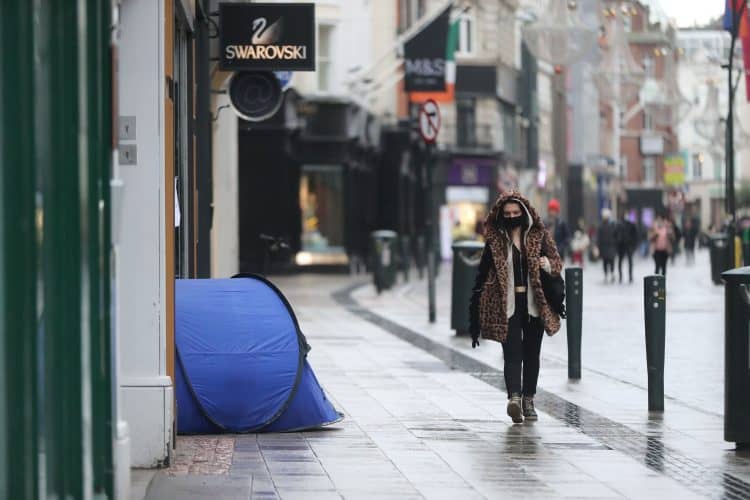 The number of people dying while enduring homelessness has surged by 80 per cent in the past two years, shocking new research has found.

The Dying Homeless Project, an annual study by the Museum of Homelessness (MoH), found that 1,286 people died while homeless across the UK in 2021 – compared with 710 in 2019.

The numbers, which include those sleeping rough or placed in emergency accommodation, shot up by 32 per cent from 2020 to 2021, with a death now occurring every seven hours on average.

And it has been revealed that over 90 per cent of deaths in cases in which a person’s situation was known occurred after they were placed in insecure accommodation.

It follows last year’s figures, which shows that deaths increased by a third in 2020 – despite the Everyone’s In programme that provided rough sleepers with hotel accommodation during the pandemic.

According to the MoH, Northern Ireland witnessed a sharp spike in deaths, with fatalities tripling to 325.

Just seven fatalities were as a result of Covid-19, with researchers pointing the finger instead at cuts to mental health and addiction services. Of the cases with a confirmed cause of death, 41 per cent were related to drug or alcohol abuse – and 12 per cent were suicides.

The museum warned that the cost of living crisis, which is set to push 1.3 million people into poverty, risks putting thousands more lives at risk.

Jess Turtle, the MoH’s co-founder, said: “These findings are a hammer blow. It’s heart-breaking to see so many people dying and to feel so helpless in the face of such a serious emergency. Government neglect means things keep getting worse with new provision for mental health, addiction and social housing failing to make up for previous cuts.

“If the government took this situation seriously, it wouldn’t have slashed the budget for discretionary housing payments by over a third last month – making it harder for councils to offer the people the breathing space they need to avoid homelessness. Reversing this £40 million cut and ending the freeze on Local Housing Allowance rates should be immediate priorities so that people have a fighting chance of meeting the spike in private rents.

“Ultimately, the government can’t fix what it doesn’t understand. There needs to be a confidential enquiry into the deaths of homeless people to allow an honest appraisal of what’s happening to the UK’s most vulnerable people. There should also be mandatory fatality reviews for all local authorities – so lessons can be learned from each death.”

Fellow co-founder Matt Turtle added: “Too many people are dying in dangerous accommodation run by unregulated landlords and funded by the taxpayer. Our research suggests over 90 per cent of deaths in the cases where we know of a person’s situation occurred after they were placed in insecure accommodation.

“These often occur in taxpayer-funded hostels which are exempt from the price cap local authorities apply to shared accommodation as they are meant to provide people experiencing homelessness with care as well as safe place to live temporarily. But many fail to meet their most basic obligations.

“The companies managing exempt accommodation now receive over £800 million a year from the public purse. The government needs to urgently regulate these businesses, providing proper oversight so people are protected and our taxes stop funding negligent landlords.”