She's forced to choose between paying £790 for her electricity meter each month and buying food. 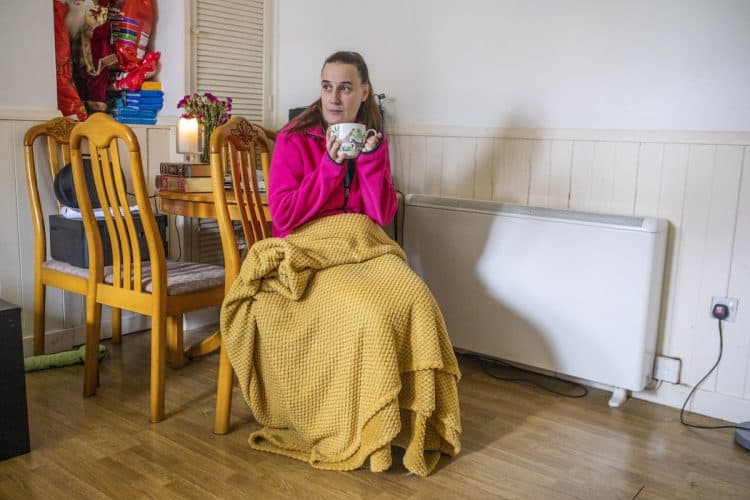 A single mother-of-two whose energy bill soared to £760 a month cannot afford to heat the home and uses candles for light.

Struggling Nicola Elson, 32, says she has to fork out up to £760 a month for electricity at her two-bed flat in Hamilton, South Lanarkshire, Scotland.

She has lived in the property for the past year and spends the majority of her salary towards her electricity meter.

She says she sits with candles on at night with the heating off in order to save the pennies – which means her two children often have to stay elsewhere.

Nicola said: “There have been times I have had to pick food or electric, or I have had to borrow off friends and family to get things I have ran out of, or even to put the electric on.

“My children’s grandparents have to pay for my children’s shoes, coats, bags, lunches, sometimes clothes because everything I have goes on my meter.

“If I get something extra, I need to then struggle somewhere else, that being the meter, the internet bill, or not being able to watch TV for an hour in the morning before school.”

Nicola moved in in March 2021 and she claims, at first, she needed to put around £140 on her Pay As You Go meter every week to see her through.

She rang up her provider, ScottishPower, to enquire as to why the price for her electricity was so high.

She says she was told that it was due to her appliances, but she only had a fridge-freezer, TV, kettle and cooker at the time.

She brought in an electrician who replaced her meter but this didn’t make a difference, and it is affecting mum Nicola’s relationship with her family.

She said: “I have five children but three of them live with their father, they come to stay with me but it has been less because of this problem.

“My younger two have to be with their dad and siblings because I can’t afford to have the heating or lights on at night.”

While she gets help from Universal Credit, Nicola buys £100 worth of food when she pays her rent that she hopes will feed her and daughters Tillie, four, and Eilidh, three, for the month.

She ensures her meals have potatoes or chips so that her girls can stay full, and is safe in the knowledge that the children get a hot meal for lunch while at nursery.

She struggles to buy anything extra after she has forked out for her electricity, and sometimes asks friends and family to help her with her other bills or food.

Cleaner Nicola said: “Sometimes I don’t eat breakfast or lunch so the girls can have it.

“I can’t do nice things with them or give them what a mother should be, because all my time goes on calling ScottishPower and all my money goes on my meter.

“I sit with candles on at night and no heating on.

“I do a morning shift which I have had to pick up to help pay for my electric on top of my evening shift.”

She has been taking medication for anxiety and depression since January, which she says is a result of her having to say goodbye to her children at the end of the day, as they can’t stay over.

“I’m constantly worrying how I’m going to put money on the meter, put food on the table or even have my children stay over,” said Nicola.

“Everything I make goes into the meter – I get paid £860 for my job as a cleaner in two schools.”

She pays the same for electricity in the summer and winter, and the figure has only ever increased over time to up to £190 a week, which comes to more than her rent of £475 a month.

She turns off everything at the sockets, and asks her friends and family to help her with washing as she doesn’t use her washing machine or tumble drier.

The mum-of-five said: “I use my cooker maybe four times a month on a Saturday to batch cook everything to put in the microwave on the weekdays.

“I’m at their grandparents for dinner three times a week and that’s also where I get most of my washing done, bathe my children and bring them home when it’s bed time.

“I currently have one winter duvet on my bed and three blankets, and my girls have two blankets and a duvet on their beds.”

In May, Nicola was offered a £40 top-up code to help her keep up with her electricity requirements, which she believed she did not have to pay back.

She called ScottishPower for a new code every two days up until December when she was told they could no longer provide any more as they “don’t like to put our customers in debt”.

She then realised that she was required to repay the top-ups, and since then her meter has fluctuated between telling her that she is £2,000 in debt and £300 in credit.

She does not know if her rate has been adjusted since to help her pay off her debt gradually.

Desperate Nicola wants to share her experience to urge electricity companies to do something to help families like hers.

She said: “It is unfair and upsetting. I just want things to change so that companies can’t do this to people.”

A ScottishPower spokesperson said: “We’ve been actively investigating the issues raised by Ms Elson, which are complex and involve a number of factors including whether the meter she had fitted is the best one for her type of property and energy use, the significant level of top-ups provided to the account – which require to be repaid – and resolving outstanding billing issues.

“Ms Elson has now chosen to pursue the matter with the Energy Ombudsman rather than the Extra Help Unit, therefore we will continue to do what we can to support the Ombudsman’s investigation, including arranging a customer liaison visit, but we will only be able to reach resolution once the Ombudsman’s due process has concluded.”