It would have made the iconic ichtyosaur even more terrifying than previously believed. Some were almost as big as a blue whale. 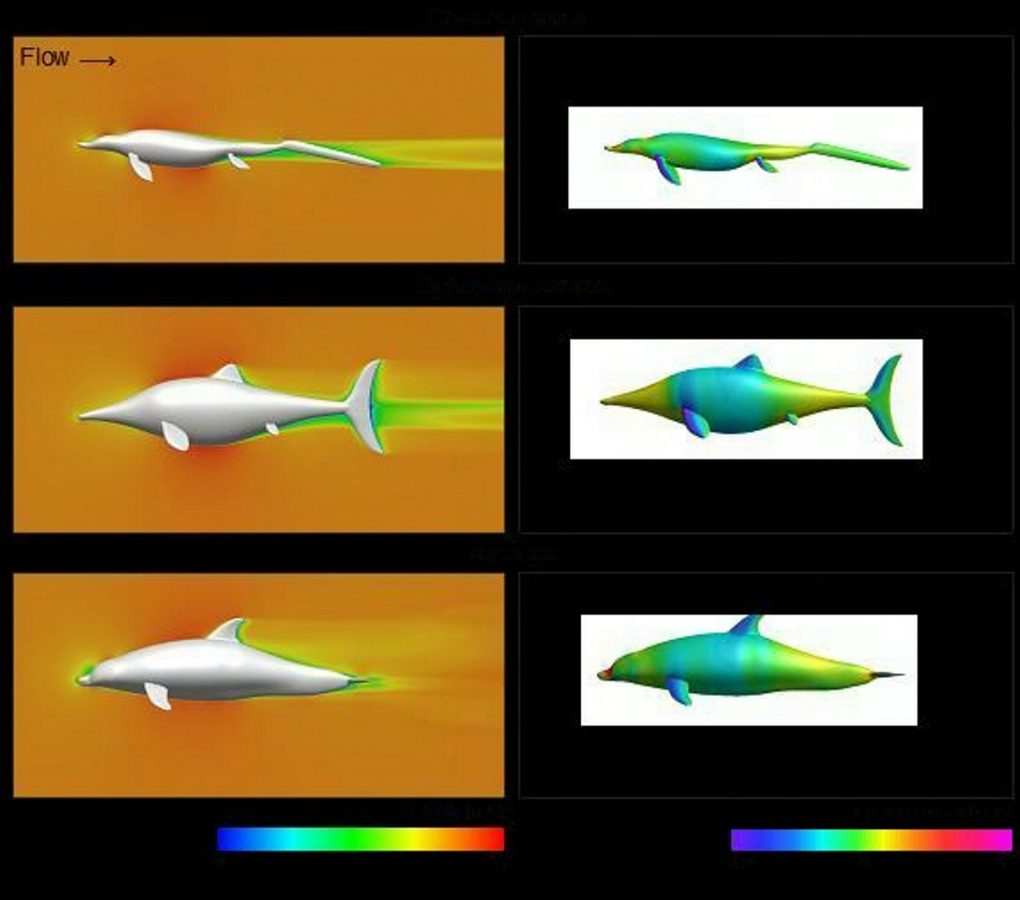 Giant prehistoric sea dragons that roamed the oceans more than 200 million years ago were as agile as dolphins, according to new research.

It would have made the iconic ichtyosaur even more terrifying than previously believed. Some were almost as big as a blue whale.

Using computer simulations, a British team at the University of Bristol have carried out the most detailed analysis of their predatory prowess to date.

They placed 3D models in a virtual tank showing even the first ichthyosaurs had body shapes well adapted to minimise water resistance – just like today’s dolphins.

The loveable mammals are among the world’s quickest marine animals, capable of reaching 20mph.

This is thanks to a streamlined body that reduces drag. Ichtyosaurs are known to have looked like them in appearance. But the resemblance goes much further.

Susana Gutarra, a PhD student in palaeobiology, said: “The first ichthyosaurs were quite small, about the size of an otter, and later ones reached sizes of 5-20 metres (16.4 to 65.6ft) in length.

“When we measured flow over different body shapes at different sizes, we found large bodies reduced the mass-specific energy demands of steady swimming.”

They ate any food they could find, catch, and kill – including squid, fish, and shellfish.
The study published in Proceedings of the Royal Society B backs earlier work suggesting they could reach up to 40mph.

It was based on nine species of ichtyosaur that lived between about 250 to 90 million years ago – and reveals they were always well adapted for speed.

This is despite changing shape substantially during their evolution – from having narrow, lizard-like bodies to more streamlined fish-shaped ones.

It was assumed that the change in body shape made them more efficient swimmers, especially by reducing the drag of the body, in other words, the resistance to movement.

If they could produce less resistance for a given body mass, they would have more power for swimming, or swimming would take less effort. Then they could swim longer distances or reach faster speeds.

Co author Professor Mike Benton, who runs the lab at the School of Earth Sciences, said: “Much to our surprise, we found the drastic changes to ichthyosaur body shape through millions of years did not really reduce drag very much.

“All of them had low-drag designs, and body shape must have changed from long and slender to dolphin-like for another reason. It seems that body size mattered as well.”

During the age of the dinosaurs, the ocean was home to many types of ichthyosaur.
They appeared in the Triassic, reaching their peak in the Jurassic.

Then they mysteriously went extinct in the Cretaceous – about 35 million years before the asteroid hit that wiped out the dinosaurs.

It is thought they may have been killed off through being outcompeted for resources by other marine hunters.

“We also created a model of a bottlenose dolphin, a living species which can be observed in the wild, so we could test if the method worked.”

Ichthyosaurs were among the first skeletons to be discovered by early fossil-hunters, at a time when theories of evolution and concepts of geology were starting to take shape.

“The software builds a ‘virtual water tank’ where we can control variables like the temperature, density and speed or water, and that allow us to measure all resulting forces.

“The model ichthyosaurs were put into this ‘tank’, and fluid flow conditions modelled, in the same way ship designers test different hull shapes to minimise drag and improve performance.”

The fossil hunter Mary Anning discovered the first complete fossil of an ichthyosaur in the cliffs near Lyme Regis, Dorset, in 1810.

Her discovery shook up the scientific world and provided evidence for new ideas about the history of the Earth.

Dr Benjamin Moon, also of the School of Earth Sciences, said: “There was a shift in swimming style during ichthyosaur evolution.

“The most primitive ichthyosaurs swam by body undulations and later on they acquired broad tails for swimming by beating their tails – more efficient for fast and sustained swimming.

“However, we found that some very early ichthyosaurs, like Utatsusaurus, might have been well suited for endurance swimming thanks to their large size, in spite of swimming by body undulations.

“Our results provide a very interesting insight into the ecology of ichthyosaurs.”

It has been suggested submarines and autonomous underwater vehicles (AUVs) would benefit from copying the dolphin’s body design to increase efficiency.

Future wetsuits based on it may even one day be worn by Olympic swimmers.

That ability is powered by large muscles that are mechanically linked to an oscillatory pair of flukes, producing thrust with greater efficiency than conventional marine propellers.”

A dolphin’s ‘fusiform’ shape with its rounded front allows water to flow inseparably from the body until getting to the slowly tapering tail. This results in a small wake and reduced drag.

Added Ms Gutarra: “Swimming is a very complex phenomenon and there are some aspects of it that are particularly hard to test in fossil animals, like motion.

“In the future, we will probably see simulations of ichthyosaurs moving through water.

“At the moment, simulating the ichthyosaurs in a static gliding position, enables us to focus our study on the morphology, minimising our assumptions about their motion and also allow us to compare a relatively large sample of models.”