He called on people to gather to stand up for truth and integrity in our democracy and against the "scoundrel and his disciples". 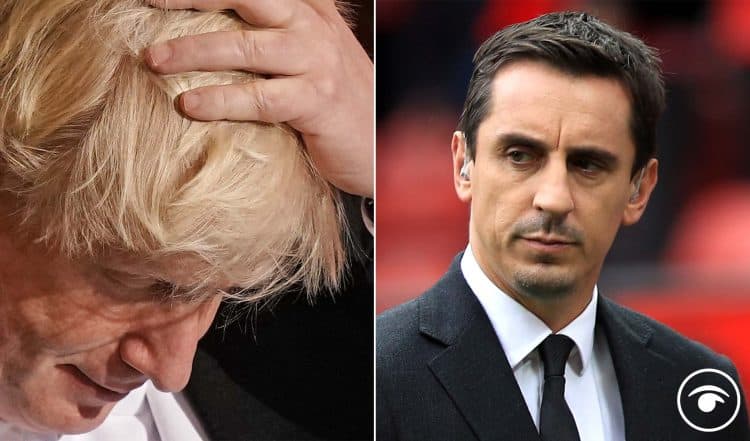 Ex-Manchester United and England star Gary Neville has backed a protest on Downing Street to be arranged for December 18th – the date when an alleged Christmas party took place last year when Covid restrictions were in place.

The football pundit has been a vocal critic of the government since the start of the pandemic, calling for “standards” to be brought back into politics.

Earlier this week, he tweeted about the PM:

“He should be done! He lies constantly to us all. His ministers then lie to us all on his behalf. Here’s what he will do 1. Ride the storm today and fudge it 2. In the next 2-3 days put a big Covid distraction out there! Work from home! Rule of 6. Don’t fall for it.”

He then called for the nation to tell the PM to ‘do one.’

But that isn’t enough for Gary. He now wants a mass protest against the government on the same day a party at Number 10 did (or didn’t…) happen last year.

He tweeted: “Protest on Downing St anyone to stand up for Truth and Integrity in our democracy ! Against the Scoundrel and his disciples ? 18th December seems the right date !! Have no idea how to organise.”

The poll came back with a huge 90 per cent of people up for making themselves heard against Johnson’s actions.

So today he has decided to actually try and get one going.

He tweeted: “Right let’s go for it! 18th December . Anyone organise for me.”

While a lot of other people said they would help – including the People’s Assembly, who ove a protest!

But some others might need a bit of helping with their organisational skills.

One concern about the date is that an anti-vaxx demo is planned to go ahead at the same time.

Also, would a mass gathering spread the Covid virus further at a crucial time for the nation?

So will you join Gary on the 18th?

Related: ‘It’s not about the party’: Gary Neville sums up public anger over Xmas bash perfectly