"These animals were going to feed the nation. It should not be allowed to happen.” 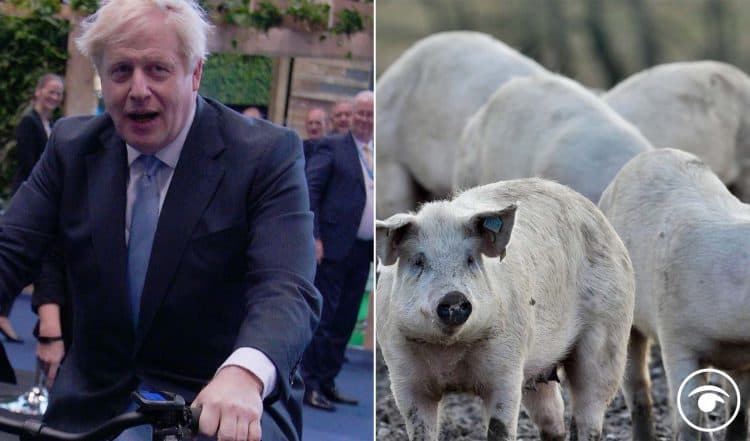 At least 600 healthy pigs have already been culled due to a nationwide labour shortage in abattoirs, the chief executive of the National Pig Association (NPA) has said.

It comes as a shortage of workers in the food supply industry could result in pigs being slaughtered at birth in Northern Ireland, the Agriculture Minister has told MLAs.

Edwin Poots, speaking during ministerial question time at Stormont, said the problems facing the agri-food sector due to labour shortages are “extremely urgent”.

He was asked to give an update on labour problems facing the meat processing industry and highlighted shortages in relation to the number of slaughter plant operatives and butchers in abattoirs and processing plants.

Zoe Davies warned that while there has not been a mass cull of pigs yet, such a measure is “the next stage in the process”.

Farmers have warned that up to 120,000 pigs could be culled as the abattoir labour shortage has led to a backlog of animals ready for slaughter.

The backlog means that farms are struggling to find space for the extra pigs – leaving them with no choice but to cull them in the face of overcrowding concerns.

Ms Davies told the PA news agency that at least 600 pigs have already been culled by “a handful of farms”.

However, she warned that many more could be culled as some farms are “on the edge”.

“There is a huge difference in terms of where farms are at”, she said.

Farms on the edge

“Some farms are on the edge.”

Ms Davies said that the cull was “hugely difficult” for the pig farmers, and some have even resorted to hiring outside help instead of asking their staff to do it.

“Some are having to use knackermen as they just can’t bear having to do it or ask their staff to do it”, she said.

She said that pig farmers were “angry, upset, all the range of emotions that you can possibly imagine”.

She added: “There is no light at the end of the tunnel.”

Earlier, Prime Minister Boris Johnson likened the culling of pigs to turning them into bacon.

“And I pondered the unhappy duty of pointing out to him that that is what happens to pigs in this country”.

He then asked Mr Dunn if he had ever eaten a bacon sandwich, adding: “Those pigs, when you ate them, were not alive. I’ve got to break it to you.”

In response to the PM’s comments, Ms Davies said that farmers care about how their livestock are used.

“Farmers care about the animals they have been rearing”, she said.

“These animals were going to feed the nation. It should not be allowed to happen.”

She called on the Government to increase the number of worker visas for abattoirs, and to lower the English language requirement.

“At the moment it’s the same level as doctors or vets”, she said.

Related: Excess gammon leads to shortage of gammon this Xmas