An extinct rainforest tree has been identified from its beautiful flowers – dislodged by a rampaging dinosaur 100 million years ago. A Triceratops or Tyrannosaurus rex could have been crashing its way through a pine forest when it knocked off the blooms, which then became trapped in chunks of amber. It’s the first time seven […] 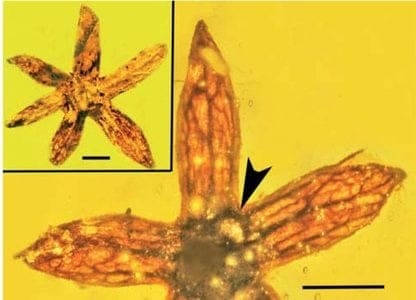 An extinct rainforest tree has been identified from its beautiful flowers – dislodged by a rampaging dinosaur 100 million years ago.

A Triceratops or Tyrannosaurus rex could have been crashing its way through a pine forest when it knocked off the blooms, which then became trapped in chunks of amber.

It’s the first time seven complete flowers this old have been found together.

They are tiny – ranging from 3.4 to 5 millimetres in diameter – but so well-preserved they could have “just been picked from the garden”, said a scientist.

The newly discovered tree may have been over 100 feet tall and lived for hundreds of years.

It’s been named Tropidogyne pentaptera after its five firm, spreading sepals – the lower part of a flower. The Greek word for five is ‘penta’ and ‘pteron’ means wing.

Usually sepals are green but in many flowers they are as colourful as petals and increase its attractiveness to insects.

Professor George Poinar, a renowned entomologist, said: “The amber preserved the floral parts so well they look like they were just picked from the garden.

“Dinosaurs may have knocked the branches that dropped the flowers into resin deposits on the bark of an araucaria tree, which is thought to have produced the resin that fossilized into the amber.

It has produced thousands of exquisite specimens of insects, spiders, scorpions, lizards, feathers and even birds.

Amber is solidified tree sap and the Burmese type occurs in small blocks that are polished to reveal the treasures within.

The flowers are so small and fragile they had to be studied under a microscope.

Prof Poinar and colleague Prof Kenton Chambers, both of Oregon State University, previously described another species from Burmese amber in the same genus.

This was a flowering plant they called Tropidogyne pikei which lived 15 million years ago.

“But it’s different in that it’s bicarpellate – with two elongated and slender styles – and the ribs of its inferior ovary don’t have darkly pigmented terminal glands like T. pikei.”

Both species have been placed in the living family of Cunoniaceae – a family of woody plants that is widespread in the Southern Hemisphere.

He said: “In their general shape and venation pattern the fossil flowers closely resemble those of the genus Ceratopetalum that occur in Australia and Papua New Guinea.

“One extant species is C. gummiferum, which is known as the New South Wales Christmas bush because its five sepals turn bright reddish pink close to Christmas.”

Another species in Australia is the coach wood tree, C. apetalum, which like the new species has no petals, only sepals.

The towering coach wood tree grows to heights of greater than 120 feet, can live for centuries and produces lumber for flooring, furniture and cabinetwork.

Prof Poinar said the relationship between a mid-Cretaceous Tropidogyne from Myanmar and a modern-day Ceratopetalum from Australia is unsurprising.

This is despite it being more than 4,000 miles and an ocean away to the southeast given the geological history of the regions.

Prof Poinar said: “Probably the amber site in Myanmar was part of Greater India that separated from the southern hemisphere, the supercontinent Gondwanaland, and drifted to southern Asia.

“Malaysia, including Burma, was formed during the Paleozoic and Mesozoic eras by subduction of terranes that successfully separated and then moved northward by continental drift.”

This included the ‘age of the reptiles’ up to 66 million years ago – when the dinosaurs were wiped out by an asteroid.