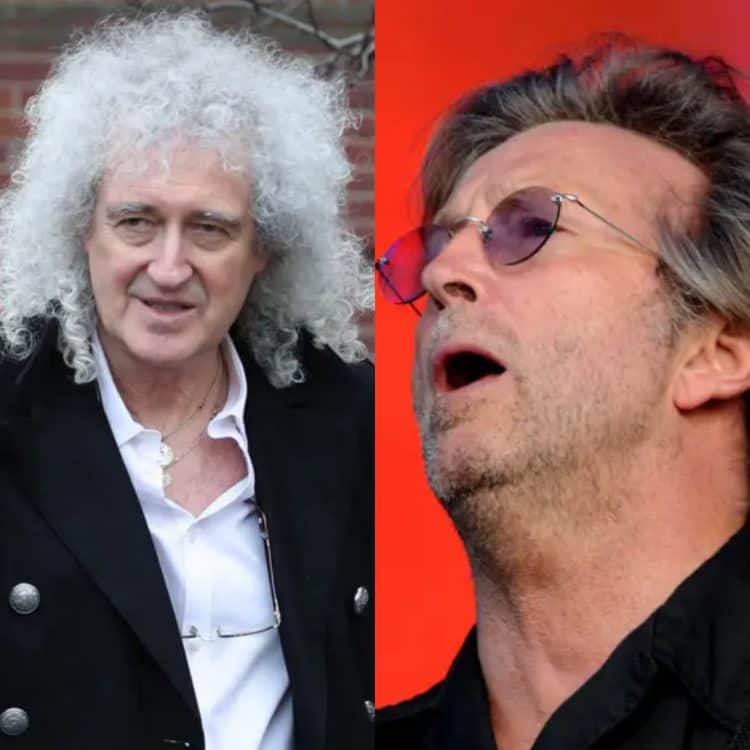 Queen’s Brian May labelled musician Eric Clapton “a fruitcake” because of his anti-vaccine views.

It comes after Clapton recently criticised vaccine passports and said he would cancel his UK tour if they were required by the venues he is set to perform in.

May criticised his views, which are also shared by Stone Roses’ Ian Brown.

“I love Eric Clapton, he’s my hero, but he has very different views from me in many ways,” May told The Independent.

He added: “He’s a person who thinks it’s OK to shoot animals for fun, so we have our disagreements, but I would never stop respecting the man.

“There’s plenty of evidence to show that vaccination helps. On the whole they’ve been very safe. There’s always going to be some side effect in any drug you take, but to go around saying vaccines are a plot to kill you, I’m sorry, that goes in the fruitcake jar for me.”

May has recently slammed Boris Johnson’s handling of the pandemic, telling The Independent that “it would have been impossible for anyone to make worse decisions” than the prime minister.

This is not the first time May has criticised a Tory prime minister.

In 2018, the musician has slammed Theresa May saying she is “driven by vanity and thirst for power”.

The accusation came as he took aim at the UK’s decision to leave the European Union, which he described as “the dumbest thing Britain has ever done” in his lifetime.

Speaking to German newspaper Welt am Sonntag, the legendary musician called Brexit a “tragedy” and “disaster”.

He said: “She (Theresa May) is, like Cameron before her, driven by vanity and thirst for power.

“It was wrong from the beginning to ask the British to vote on Brexit, which has consequences that most were unaware of.

“I’m upset that a few politicians have managed to throw us under a bus. I sincerely hope that we can manage to get out of it again. It’s a disaster, because the losses that are caused by it will be huge for us.”

“Brexit is the dumbest thing Britain has ever done in my lifetime.”

“For me and for many other Britons, this is an absolute tragedy, because the story is going in the wrong direction.”

“It was always important to me to identify similarities and to work together. Brexit destroys the work of a whole generation that has brought Europe together.”

In recent months, musicians have revealed the negative effects of Brexit.

World-renowned singer Dame Sarah Connolly told TLE that the creative industries, which contribute £116 billion to the UK economy, will lose their competitiveness in a post-Brexit world.

Peter Corr, organiser of Music Sounds Better with EU, said Brexit is already affecting all musicians, including DJs and technicians.

But he thinks a lot of people do not yet realise the impact of the UK leaving the European Union, because of Covid. “Once it calms down, I think they are going to start realising they are not going to be able to get any bookings,” he said.

“A lot of big name DJs themselves started on these really small circuits,” Corr said, adding: “They wouldn’t be where they are if it wasn’t for these small circuits, and I couldn’t see a way around it even for myself because of the costs involved.

“There are lots of people who are getting into DJing who are going to be stuck in their bedroom with it.”