Footage posted on social media shows the man walking slowly and being helped into the back of a van as fellow protesters shouted "You're a legend!" and "We love you!" 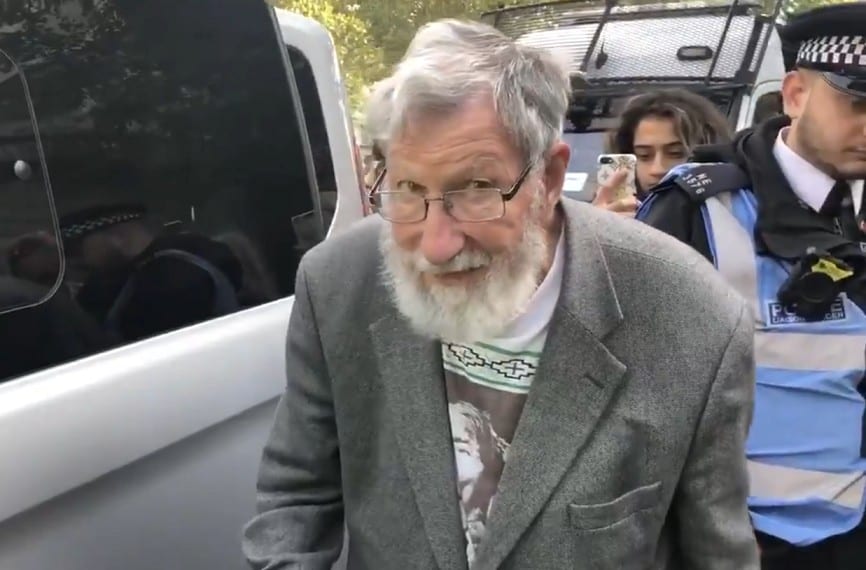 A 91 year-old protester was arrested at an Extinction Rebellion march in central London yesterday.

John Lymes was put in the back of a police van outside the Cabinet Office in Whitehall as part of the ongoing protests and civil disobedience by climate change activists.

Footage posted on social media shows the man walking slowly and being helped into the back of a van as fellow protesters shouted “You’re a legend!” and “We love you!” as he got led away.

Is this what it’s come to. Arresting a 91 year old man with a walking stick who wants to save the planet for its children. This is heartbreaking to watch pic.twitter.com/gd24R3606O

“My generation is responsible for the climate emergency”

It’s not the first time Mr Lymes has flirted with the long arm of the law.

In September he joined climate protesters in blocking an exit at the Port of Dover.

The pensioner sat in the middle of the road with a flask of coffee before being taken away by officers, The Telegraph reported.

“My generation is responsible for the climate emergency,” he said before he got arrested in Kent.

It is not known exactly on what grounds the man was arrested this time, and the Metropolitan Police were unable to confirm the grounds before any charges had been brought.

Compliment to be called an unco-operative crusty

It comes as Boris Johnson’s dad Stanley addressed the climate demo, hitting back at the unsavoury terms used by his son to describe activists earlier in the week.

He said: “I regard it as a tremendous compliment to be called an unco-operative crusty. That was a remark made in humour.

“I’m showing up here because I think what they [Extinction Rebellion] are doing is tremendously important. From tiny acorns, big movements spring.

“This is a movement, it is a very important movement.

“It is absolutely clear to me that we have been moving far too slowly on the climate change issue.”