The latest action is part of two weeks of disruption demanding urgent moves to protect wildlife and the climate. 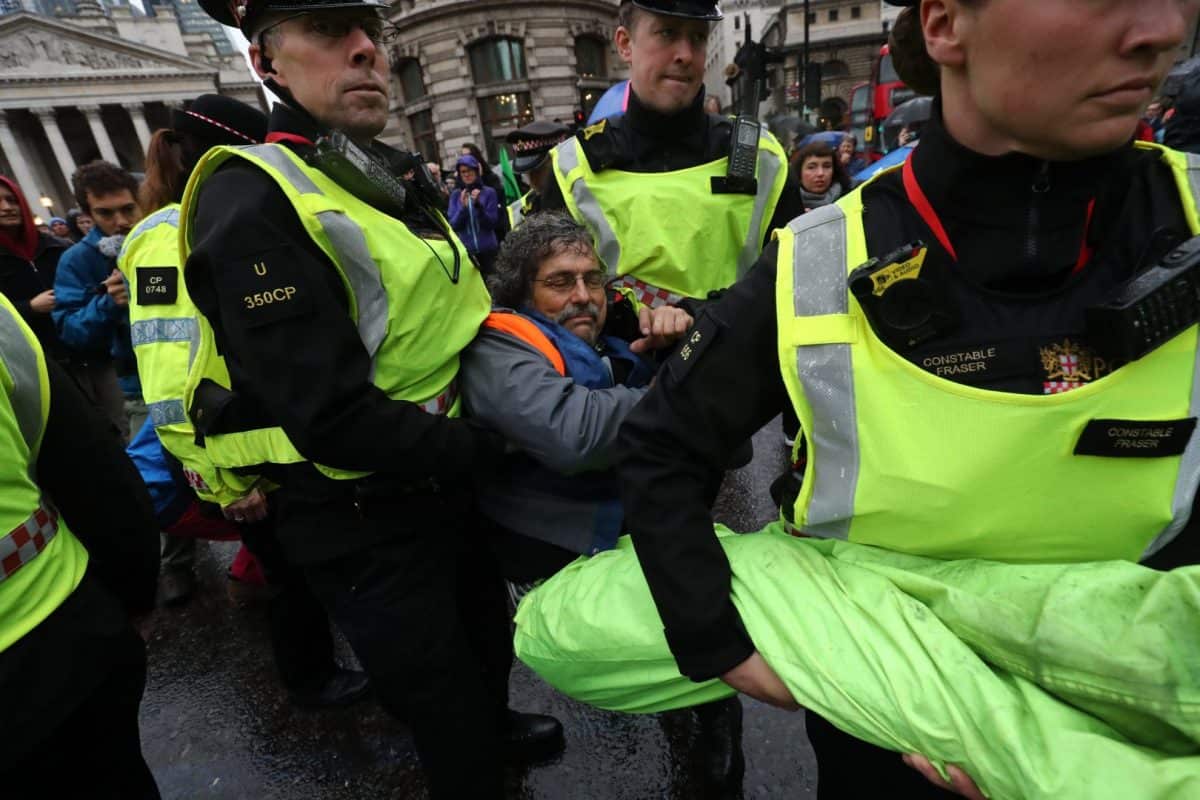 Extinction Rebellion protesters blocked a junction outside the Bank of England as the environmental protests entered their second week.

The activists have vowed to bring disruption to London for two weeks, calling for urgent action on climate change and wildlife losses.

After last week’s protests which blockaded Parliament and targeted City Airport over proposed airport expansion, protesters are now focusing on the City of London over financial backing for fossil fuels.

In the morning rush-hour on Monday, protesters sat or stood in the road outside the Bank of England, as City workers left Bank Underground station, bringing traffic to a standstill in surrounding streets, with queues of buses empty with their engines off.

Hundreds of activists occupied the crossroads in the pouring rain, chanting and huddling under a large green tarpaulin, while others stood with banners reading “Fossil Fuels = Extinction”.

The activists say trillions of pounds are flowing through financial markets to invest in fossil fuels which damage the climate.

Dave Evans, 32, an IT consultant from London, said he had taken two weeks’ unpaid leave to join the Extinction Rebellion protests.

‘Financing for fossil fuels increased every year since the Paris Agreement’

“Since 7am we have shut the roads outside the Bank Of England in the City of London. Financing for fossil fuels increased every year since the Paris Agreement,” said a statement by the movement. “33 banks financed fossil fuels with $1.9 trillion since Paris with $600 billion funding aggressive fossil fuel expansion”

He said the finance sector needs to “stop funding the climate crisis”.

“These huge corporations are financing fossil fuels and (are) being subsidised by the Government,” he added.

Iris Skipworth, who was handing out Extinction Rebellion leaflets to commuters at the obstructed crossroads at Bank, said: “A lot of commuters are very annoyed, because they are trying to get to work quickly.

“I can understand, but it’s shortsighted. I have had people saying things like ‘Get a job, you wanker’, ‘Get out of the road’, and ‘Why don’t you go extinct?’.”

Ms Skipworth, who has taken time off from her job as a garden centre assistant in Manchester, added: “I’m here because the 33 banks around the City of London gave £66 billion to the fossil fuel industry this year, and £0.9 trillion since the Paris Agreement was signed in 2015.

“The Government has declared a climate emergency, yet they’re not even scaling this back slightly … we’re here to hit the Government in the wallet, hopefully.”

Police have been warning protesters individually that they will be arrested under a Section 40 order for obstructing traffic if they do not leave the area.

Leading activists, such as people carrying drums and a woman with a megaphone, were led away by officers as the crowd cheered them on.

More than 1,300 people have already been arrested in the protests, part of an “international rebellion” with action taking place in cities around the world.

In the UK, Extinction Rebellion is calling on the Government to declare a climate and ecological emergency, to act immediately to halt wildlife loss and to reduce greenhouse gas emissions to net zero by 2025.