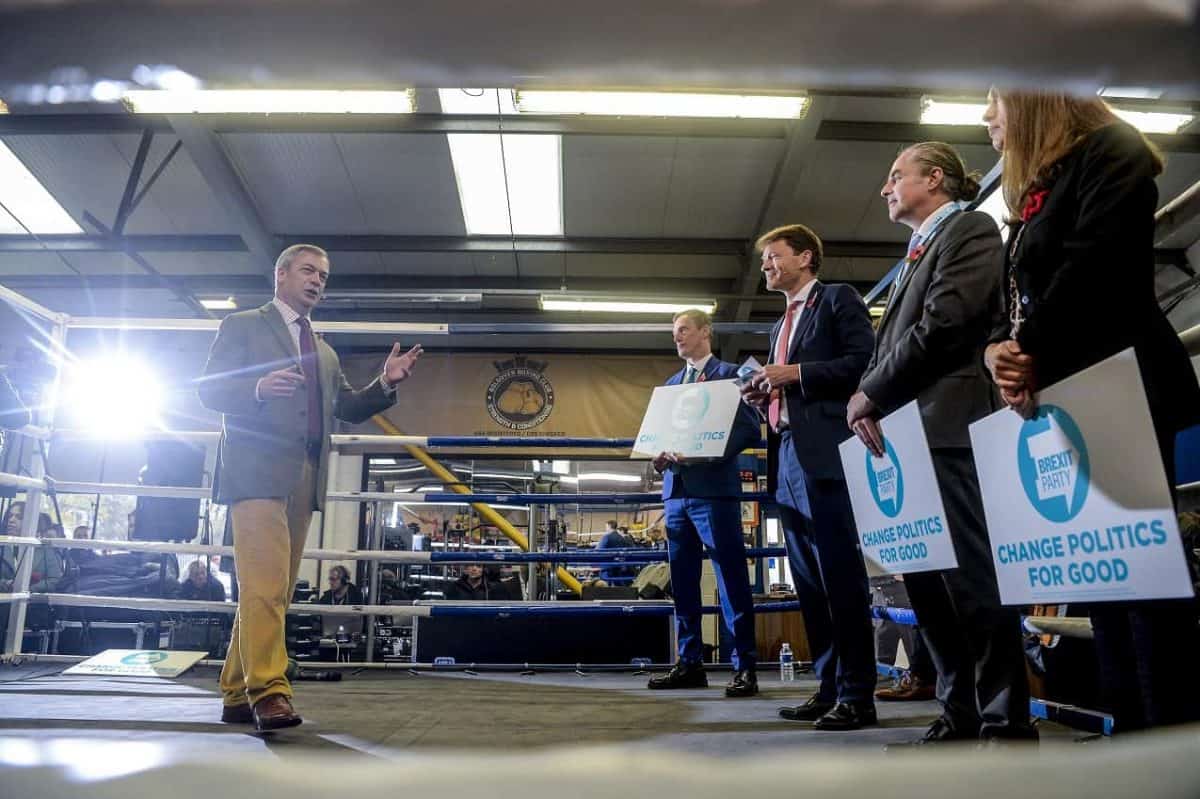 Of prospective parliamentary candidates (PPCs) standing for Nigel Farage’s party who have expressed views on climate change publicly, the majority appear to reject mainstream science on the issue.

While a handful of Brexit Party PPCs have made calls for greater action to limit emissions, most have made no previous statements on what Parliament declared was an “emergency” earlier this year.

The party’s announcement that it will not be fielding candidates in any of the seats won by the Conservatives at the last election means some of the PPCs mooted for particular seats will now not be running. Some may, however, be transferred to other seats ahead of the final deadline for submissions.

The party’s policy platform, which excludes any mention of climate change, contains just two environmental commitments – to “plant tens of millions of trees” and to recycle waste in the UK rather than abroad.

The Brexit Party, which refused to comment on DeSmog’s findings, recently appeared to accept the threat of climate change and advocate low-carbon measures in a mailout to supporters. The party quickly backtracked, however, saying the statement had merely been a “suggested draft from a keen young staffer”.

One candidate contacted by DeSmog said he would only be happy to “provide a full view” on climate change “once elected”.

DeSmog has also identified six Brexit Party candidates affiliated with Spiked, an anti-environmental media outlet which grew out of the now-defunct Revolutionary Communist Party. The group was revealed last year to have received significant funding from the oil billionaire Koch family, key backers of libertarian, climate science denial organisations in the US.

The former Conservative minister and now Brexit Party MEP for South West England has a long history of rejecting the scientific consensus on climate change.

Having been one of only five MPs to vote against the UK’s landmark Climate Change Act in 2008, Widdecombe has written that the “science of climate change is robustly disputed”.

In a 2014 column for the Daily Express, she described a book by Lord Nigel Lawson which downplays the risks of climate change as the “best refutation of the doom mongers” and compared its difficulty in getting published to book-burning in Nazi Germany.

Elected as an MEP for the Brexit Party in May, the former editor of lads’ mag Loaded  has made numerous comments denying climate change is human-caused.

Daubney has said it “cannot be proven” and that “we can’t say for sure man is responsible”.

He has also praised the work of long-time climate science denier James Delingpole, calling one of his articles that claimed climate change had caused “zero” deaths in 2014 “superb.”

Since being elected to the European Parliament, Daubney has said the issue is treated “like a religion” in Brussels and praised commuters who dragged Extinction Rebellion activists off a London Underground train in October, calling for tasers to be used against them.

Former Wales UKIP leader and MEP, Gill defected to the Brexit Party last year and has said it is “ridiculous” to think humans could have an effect on the climate.

In 2015, he told the BBC climate change was being exploited by governments who have “realised this is a great way of taxing people”.

Last year, Gill said in a statement that he would vote against the EU’s Renewable Energy Directive.

“The European Commission continues to impose never-ending objectives for emissions reductions. EU policies oblige us to invest vast amounts of money on initiatives that will have little or no effect on climate change,” he wrote.

Other candidates who appear to reject mainstream climate science include:

The Spiked group of academics and writers who regularly publish articles attacking efforts to tackle climate change are well-represented in the Brexit Party’s candidate list. DeSmog previously revealed that the group was funded by Charles and David Koch, billionaire American industrialists and infamous funders of climate science denial.

James Woudhuysen (Carshalton and Wallington), a professor at London South Bank University, has written extensively on the issue. He acknowledges its existence but opposes what he considers the “misanthropic green ideology of restraint”, backing high-carbon projects like Heathrow expansion and dismissing renewables as “nowhere near viable”.

Stuart Waiton (Dundee West), a sociology professor at Abertay University who has been writing for Spiked since 2001, has described supporters of Greta Thunberg as a “cult”. He told DeSmog he accepted that “mankind is having an impact on the environment” but dislikes environmentalists’ “culture of limits”.

Kevin Yuill (Houghton and Sunderland South), a history professor, has cast doubt on the impacts of climate change, decrying“eco-doomsayers”, while Paddy Hannam (Islington South) has described achieving “net zero” emissions as a “waste of money”.

Dr Alka Cuthbert (East Ham), another regular contributor to Spiked, does not appear to have made any public comments on climate change.

James Heartfield, who has blamed the Grenfell tragedy on climate targets and written a book arguing that attempts to “green” the economy are about “manufacturing scarcity to boost prices”, is no longer standing in Islington North for the Brexit Party. He did not know who he had been replaced by when asked.

Some Brexit Party candidates have shown support for strong climate action, however.

Mark Taylor (Coventry South) shares the concerns of Extinction Rebellion, if not their tactics, and is a fan of solar energy, while Colin Lambert (Heywood and Middleston) opposed fracking during his tenure as Labour leader of Rochdale council, saying he wanted the borough to be the “greenest in the country”.

Despite repeating a common trope that Greta Thunberg is being “exploited as a poster child” by her parents and climate activists, Mike Greene (Peterborough) has backed a 2050 “net zero” target for the UK and called for a “cross-party approach” to tackling climate change.

Meanwhile, Lourdesiree Latimer (Stroud) is seemingly engaged with the issue of rising greenhouse gas emissions and runs a thermal energy company based in the Philippines.

Victims of Brexit Party announcement not to contest Tory seats

A number of candidates DeSmog investigated were due to stand in seats won by the Conservatives in 2017, though may still be swapped into other constituencies.

Another Brexit Party MEP hoping to enter the House of Commons this election is co-founder of the Arron Banks-backed Westminster  website Michael Heaver, who has often expressed uncertainty about mainstream views on climate change.

He has tweeted that “Climate change is an interesting one, I don’t exactly tow the line on that one”, and called climate scientists at the University of East Anglia “selective with facts”.

In 2012, Heaver praised the appointment of climate science denier Peter Lilley to the House of Commons Energy and Climate Change Select Committee, saying the appointment was “significant”.

A former UKIP MEP for the South West who served as the party’s Spokesperson for Science and subsequently Spokesperson for the Environment during her time at the European Parliament, Reid has frequently promoted news casting doubt on the threat of climate change.

In 2015, she shared an article posted on a conspiracy theory website that claimed a “minute increase of anthropogenic CO2 in the atmosphere” was not the cause of global warming. She has also criticised EU efforts to promote green energy, calling them “unrealistic” and based on “alarmist dialogue about man-made climate change” in a debate on the policy.

Another Brexit Party MEP, Rowland has denied the veracity of climate science on the floor of the European Parliament, saying in a debate in October:

“There is, frankly, more credibility with the theories such as sunspots, the Milankovitch cycle and orbital variations than there is with anthropogenic warming, but by far the biggest impact of climate policies is on energy costs, living standards and the economy.”

He has also praised Martin Durkin, a filmmaker who produced the infamous documentary The Great Global Warming Swindle, as well as climate science denier Matt Ridley, who he has said he admires for his “repudiation of climate hysteria”.

Other candidates that were set to run for the party include:

Other candidates analysed accept the science but oppose measures designed to tackle the problem, such as Jonathan Bullock, an ex-UKIP MEP who has said the UK’s Climate Change Act should be abolished, and Les Durance, who has tweeted that “wind farms and congestion charges in city centres won’t save the Planet!”

Farage’s decision not to threaten Conservative-voting seats may mean the Brexit Party losing a few candidates who do have climate action on their radar.

David Bull, a medical doctor who was due to contest the seat of Central Suffolk and North Ipswich, has made frequent calls for climate action. In June, he tweeted that the UK needed a “renewable national energy infrastructure” and backed the drive towards “zero emissions”. He has also celebrated the recent milestone reached by the UK when it began generating more electricity from renewables than fossil fuels.

Darren Selkus (Epping Forest) has expressed his concern about the “extreme weather events being experienced around the world” and wants more low-carbon energy produced in the UK.

David Smith (South Dorset), a former Conservative councillor who held the Planning and Environment portfolio on Bournemouth council, has slammed Donald Trump for pledging to take the US out of the Paris Agreement. He has also voicedconcern about coastal erosion, a subject Keith Adams (Welwyn Hatfield) is researching for his PhD.

DeSmog also identified two Brexit Party candidates who have had leading roles in the fossil fuel industry and dismiss the threat of climate change, though neither may now stand as a result of today’s decision.

He called climate change a “matter of debate” in an EU elections hustings earlier this year and has shared content from the UK’s principal climate science denial think tank the Global Warming Policy Foundation.

Paul Chapman (Reading West) has spent much of his career as an engineer “working predominantly on oil and gas mega-projects for Middle-Eastern clients”.

Neither candidate responded to a request to comment for this story.

The London Economic asked the Brexit Party to comment too. The word “climate” does not appear to feature in the party’s ‘Contract With The People’ launched on Friday