The former military man could be unable to pay his rent as he adjusts to life in a wheelchair. 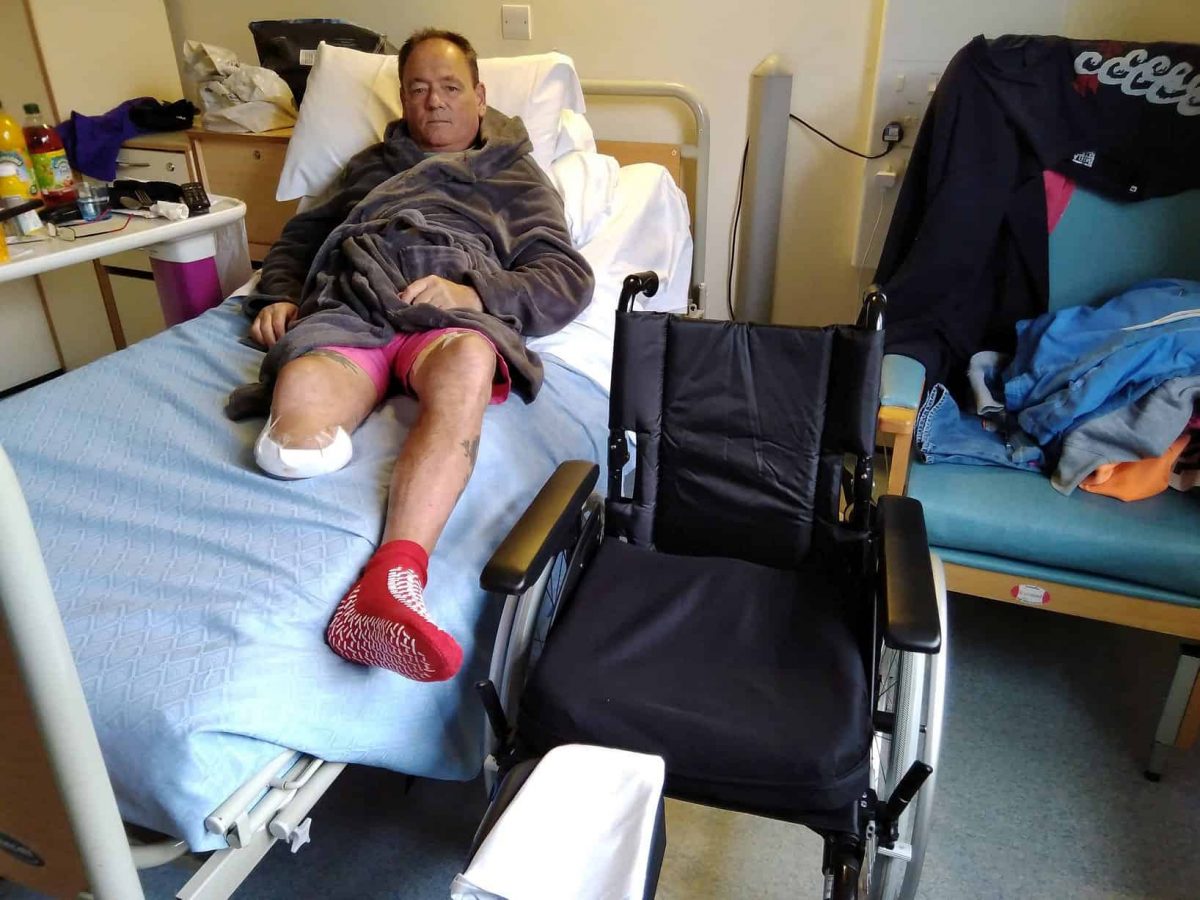 A Royal Navy amputee confined to a hospital bed with just £16 a month Universal Credit says he has been told to ‘get a job’ by the DWP.

Kevin Barnes, 62, said his life was turned upside down three and a half weeks ago when surgeons decided it would be best to take off his leg.

The former military man who served in the armed forces for 17 years had been suffering with severe circulatory problems, and now he has to adjust to life in a wheelchair.

Despite this, Kevin, from Plymouth, Devon, has been told by the Department for Work and Pensions that he can only get £16 a month in Universal Credit – leaving him unable to pay his rent.

Worst still, the father-of-two says he’s been lumped into the same category of people who must show they’re still serious about getting back into employment.

I have to prepare myself for being in a wheelchair

Kevin said: “I’m supposed to be looking for work in the future, enhancing my CV, this that and the other.

“But I cannot plan for work at the moment. I now have to prepare myself for being in a wheelchair all the time and get used to that.

“Then there’s the prosthetics – I have my first meeting for that as well.”

Kevin served in the armed forces for 17 years as a Petty Officer Engineering Technician and as such he is now entitled to a military pension.

He claims DWP central decision-makers won’t give him any more than £16 a month in Universal Credit – because his naval pension is considered a source of ‘income’.

But the pension only pays out £500 a month, Kevin says – whilst his rent is £410, leaving him in dire straits.

Kevin continued: “I went to a Remembrance service and had some friends come and pick me up in a taxi, and because I always go to Remembrance Sunday, I put my medals on and enjoy it.

“But they took me and there I was, at kids height, rather than the average 5ft 10ins guy, in a wheelchair – for the rest of my life.

“It’s a totally different way of looking at life. Even to go down a path, and finding the steps at the bottom and thinking; ‘oh Christ, what do we do here?

“And going to a local pub afterwards on the Barbican, we couldn’t go in without two people potentially picking me up.

“All of these things are coming into my life now – I can’t do anything for myself anymore. My life has totally, totally changed.”

Benefits system needs to be revised

Kevin said that staff at his local Jobcentre have been ‘fantastic’ – but said the overarching benefits system needs to be revised.

He said that he fears some cash he draws from Personal Independent Payment is also going to wind up soon as well.

That’s because the law states you’re not entitled to any PIP if you end up in hospital longer than 28 days.

He’s currently two and a half weeks in, and so far the DWP say Kevin still continues to be in receipt of £81.90 a week in PIP cash.

Further deductions have also had to be made to his Universal Credit claim to clear debts on the account, the department added.

“I had been working and I expect to work,” Kevin said. “I just thought I would be working and my naval pension would be a bit of a bonus, but it’s turned out to be my main source of income.

“Because it’s considered a source of income, they take it away from you. They say, you can afford to pay your own rent.”

Kevin’s also technically homeless, and essentially ‘bed blocking’, because his flat has been deemed unsuitable for his needs and housing officials need to find him a new home.

Yet he’s still also paying rent on the property because all of his possessions are still there.

Turn the clock back

Kevin, originally from Birkenhead, on Merseyside, served in the military from 1972 to 1989 and wishes he could turn the clock back.

“I loved it, absolutely loved it,” he said. “I wish I had stayed on longer.

“I came out at that time, because I thought, I’m 33, I can start a new chapter in my life in civvy street because I was young enough to start a career,” he added.

DWP officials say they are now reviewing whether Kevin can work and claim more money in light of his new circumstances.

A DWP spokesman said: “Mr Barnes’ capability assessment was completed before his operation. In light of his current health situation, staff are of course reviewing his Universal Credit and Personal Independence Payments.

“Income such as occupational pensions are always taken into account when calculating means tested benefits.”

Related: A manifesto of hope, especially for the NHS