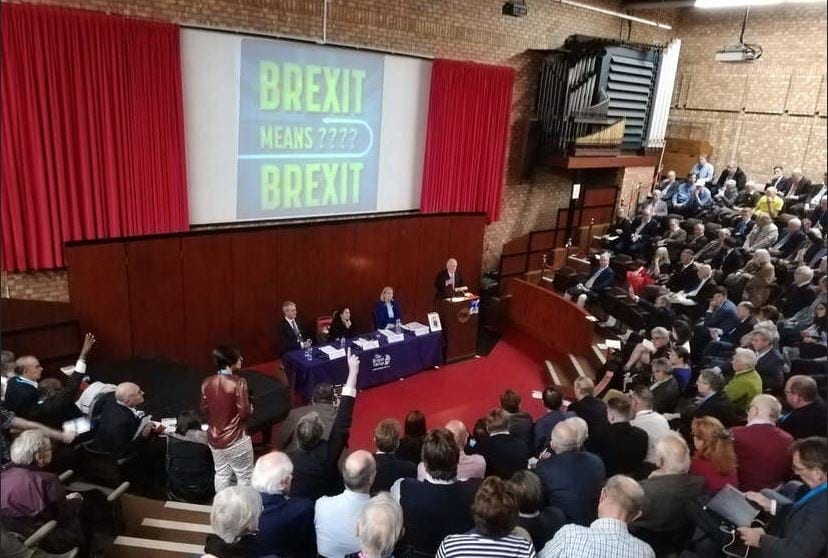 As the rift between different factions of the Conservative Party deepens over Brexit, Paterson, a political advisor to the group Leave Means Leave, was preaching to an audience already on his side of the divide.

He was speaking at the Alternative Brexit Conference, a one-day event which ran parallel to the Conservative Party Conference in Birmingham on Monday and required no pass or accreditation to attend.

It was organised by The Bruges Group, a Eurosceptic think tank created to uphold Margaret Thatcher’s ideas, which has repeatedly spread disinformation about climate change.

Indeed, previous blog posts and lecture notes published on the group’s website have criticised the EU’s “alarmist” views on man-made climate change and accused it of using global warming as an excuse to impose regulations and ramp up energy prices.

Throughout the day, the conference heard from those on the right of the Conservative party pushing for a hard Brexit and making the case for deregulation and the importance of a free trade deal with the US.

It gave a platform to climate science deniers such as David Campbell Bannerman, a Conservative MEP for the East of England, who joined UKIP between 2004 and 2011, and previously accused the EU of being a “green Taliban”.

The conference also heard from Whitham MP Priti Patel and one of the party’s right-wing rising star Andrew Jenkyns, the MPfor Morley and Outwood and an advocate for the group Leave Means Leave.

Alternative and fringe events in and outside the Conservative Party conference showed how the networks of hardline Brexiters and climate science deniers continue to overlap and at times work together to mount pressure from the right of the party.

Instead, the room unanimously backed leaving the EU, whether under a Canada-style free-trade deal or without a deal – resulting to trade under World Trade Organisation (WTO) rules.

Cheers roared across the room at any mention of “taking back control” and that “no deal means no cash” for the EU. A Guardian reporter was booed when asking why the group did not push for a Conservative leadership contest.

Both Jenkyns and North Shropshire MP Paterson made passionate calls to “reject the over-regulated” EU standards and laws and embrace the opportunities of making trade deals with countries outside the EU.

Their comments came a week after the free-market think tank the Institute of Economic Affairs (IEA) published an alternative Brexit plan which called on the UK government to cut EU environmental regulations to secure free-trade deals with the US, China and India after Brexit.

The report singled out environmental protection rules as “frequently disguised methods of protectionism” and one of the areas where EU regulation is “moving in an anti-competitive direction”. The report, authored by controversial trade lobbyist Shanker Singham, was criticised for its methodology.

The same arguments were yet carried forward by the conference’s speakers.

Paterson told the audience about his visit to Washington DC last week, when he made the case for a special relationship between the US and UK during a speech at the free-market think tank the Heritage Foundation.

Recalling his conversation with US officials, he said: “They have made it completely clear that they won’t be a free-trade deal with the UK if the laws of this country are made elsewhere [in the EU] and involve regulations that they don’t like.

“We should be starting to actively negotiate with the US but until May’s Chequers’ plan is on the table, they won’t start talking to us.”

The regulations Paterson referred to include for instance allowing chlorine-washed chickens and hormone-fed beef and GMcrops to be imported into the UK for the first time.

Although both environment secretary Michael Gove and international trade secretary Liam Fox have said they would not lower the UK’s food and environmental standards to strike a free-trade deal with the US, the speakers made it clear that deregulation remains a key issue for the right of the Conservative party.

The Alternative Brexit Conference also gave a platform to MEP Campbell Bannerman, a climate science denier who also sits on the advisory board of Leave Means Leave, and is a former chairman of the Bow group – a free-market think tank closely linked to the IEA.

In a 2014 opinion piece for the Huffington Post called “The EU’s Green Taliban are another reason to quit the EU”, Campbell Bannerman said he agreed with former Australian Prime Minister John Howard that climate change has become “a substitute for religion”.

Campbell Bannerman accused “the majority of British civil servants” of being “environmental fundamentalists” and ignored the overwhelming scientific consensus on the issue to describe “the mass scientific uncertainties over man-made climate change”.

Campbell Bannerman argued that the EU’s target to reduce carbon emissions by at least 40 percent by 2030 “would simply destroy the European economy while at the same time the rest of the world carries on regardless”.

Speaking at the conference, he slammed the Labour Party’s Brexit policies describing Jeremy Corbyn as a “Nazi” and calling Labour’s shadow chancellor John McDonnell “a nasty piece of work”.

Steven Woolfe, the MEP for the North West of England, was next to address the conference about “making the Conservative Party conservative again”.

As I have always said for some backers of wind and solar becoming the next crony capitalist is the goal. It’s all about the money, subsidies and tax breaks. Meanwhile costs soar for the poorest consumers and never come down https://t.co/K6i3Z8IVeZ

Woolfe was once considered a favourite to replace Nigel Farage as leader of the UKIP, might be best remembered for his altercation with a fellow UKIP MEP at the European Parliament which left him in hospital.

Woolfe, who resigned from UKIP in October 2016, was later found to have started the incident after wanting to settle his differences with UKIP MEP Mike Hookem “man to man”.

Woolfe’s renewable energy claims come in stark contrast with current research which show the rapidly declining costs of renewable energy – a trend which is accentuated when taking into account the carbon price of fossil fuels. Earlier this year,a report by the International Renewable Energy Agency (IREA) found that renewable energy is set to be cheaper than fossil fuels by 2020.

But one fossil fuel company is keen to retain its close ties with the Conservative Party.

Inside the exhibition area of the conference centre, oil company BP was given a prime advertising stand opposite the government’s “Great Britain” campaign, which aims to boost investment and trade links with the UK around the world.

The fringe that has become mainstream

Both the IEA, which is registered as an educational charity, and the TaxPayers’ Alliance are part of a number of organisations working out of an office at 55 Tufton Street, near Westminster, alongside the climate science denial group the Global Warming Policy Foundation (GWPF).

While these groups have long pushed to influence policy on the fringes of the Conservative Party, their ideas and arguments are increasingly becoming central in swinging the ideological debate to the right.

All three groups were accused by grassroot campaign BeLeave whistleblower Shahmir Sanni of mounting a coordinated campaign to push for a hard-Brexit in the media.

The IEA is currently under a regulatory compliance investigation by the Charity Commission after an undercover investigation by Greenpeace’s investigative unit Unearthed and the Guardian suggested the IEA offered potential US donors access to UK government ministers to promote free-trade deals.

The IEA has denied any allegations of “cash for access”.

From the media, Liam Halligan, a Telegraph columnist and member of the “no-deal” advocate group Economists for Free Trade, and associate editor Camilla Tominey both took part in panel discussions.

On Sunday evening, Daniel Hannan MEP, from the Initiative for Free Trade, together with IEA’s Singham and representatives from the Cato Institute and the Heritage Foundation presented their visions for an “ideal US-UK free trade”. At the crux of that debate is environmental regulation.

As the UK is about to leave the EU, these campaign groups and think tanks which were used to pushing for a deregulated free-market on the party’s fringes have now taken a front seat in driving the Conservative Party’s ideological debate.

Image Credit: Inside the Alternative Brexit Conference organised by the Bruges Group/@ChloeFarand