Addressing her victims directly, she said: “I hope my sentence… brings you closure… peace and finality." 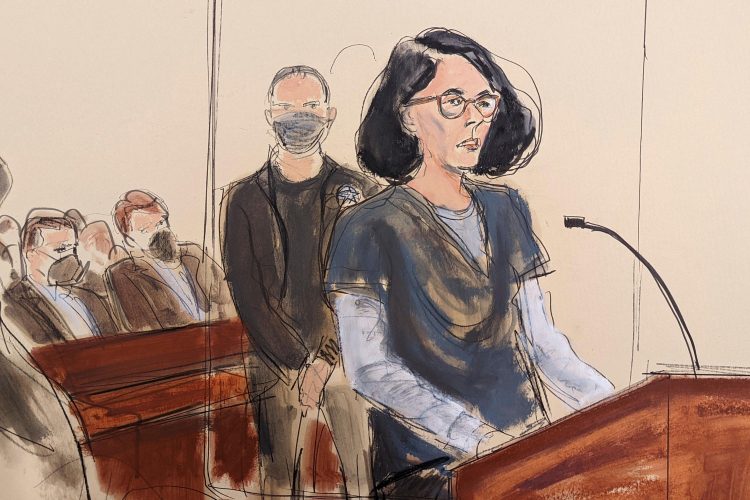 British socialite Ghislaine Maxwell has been sentenced to 20 years in prison for luring young girls to massage rooms for disgraced financier Jeffrey Epstein to molest.

The 60-year-old looked straight ahead and showed no emotion as a judge in the Southern District of New York passed sentence in front of a packed public gallery.

Her accusers came face to face with her on Tuesday as several women read victim impact statements to the court – describing her as a “manipulative, cruel and merciless person.”

Maxwell, who was described as “dangerous” by the prosecution during her three-week trial last year, helped entice vulnerable teenagers to Epstein’s various properties for him to sexually abuse between 1994 and 2004.

At the hearing on Tuesday, the socialite apologised to her victims, saying she hopes her sentence will allow them “peace and finality”.

Maxwell said meeting Epstein was the “greatest regret of my life” and that she wanted to “acknowledge the suffering” of her victims.

“I know my association with Epstein will follow and and forever stain me,” she said addressing the court moments before her sentence was handed down.

“It is the greatest regret of my life that I ever met Jeffrey Epstein.”

“I am sorry for the pain you have experienced”

Addressing her victims directly, she said: “To you, all the victims that came to today inside the court and outside…I am sorry for the pain you have experienced.

“I hope my sentence… brings you closure… peace and finality. To help you put those experiences in a place that helps you move forward.”

Maxwell said the knowledge of the effects of her crimes “tortures me every single day”, and that she hoped the sentence “brings this terrible chapter to an end and… help you travel from darkness into the light”.

She was convicted of five offences in December last year, including sex trafficking minors, conspiracy to entice a minor to travel to engage in illegal sex acts, and conspiracy to transport a minor with the intent to engage in criminal sexual activity.

Sentencing Maxwell to 20 years in prison, Judge Alison Nathan told the court she “repeatedly, and over the course of many years participated in a horrific scheme to traffic young girls, some the age of 14”.

Judge Nathan said it was important that although “Epstein was central to this scheme” she was not being sentenced “as a proxy” for him.

She said: “The defendant’s conduct… was heinous and predatory.

“Ms Maxwell worked with Epstein to select young victims who were vulnerable and played a pivotal role in facilitating sexual abuse.”

Continuing her sentencing remarks, Judge Nathan told the court: “The damage done to these girls was incalculable.”

The judge said Maxwell’s victims were forced to live through the “painful, horrific and lasting impact of that trauma”.

She continued: “Those who engage in and facilitate sexual abuse will be held accountable by the law.

“Whether you are rich or powerful, nobody is above the law.”

“Nobody is above the law”

Maxwell arrived with shackles around her ankles which rattled as she made her way to her seat in the courtroom.

The hearing heard how she was able to pay a fine because of a 10 million dollars bequest left to her by Epstein when he died.

Kate elected to read a different statement to the one submitted in a written format, saying: ““A manipulative, cruel and merciless person.

“Today, for the first time, I stand with my sisters – bound by a trauma I would wish on no-one.

“Someone who even had a difficult or abusive father does not excuse sex trafficking of minors.

“A lack of remorse or responsibility from Ghislaine is exactly how we can tell that she doesn’t think what she did was wrong.

“She is not sorry and she would do it again.”

Throughout the trial, the court heard how she imposed a “culture of silence… by design” at Epstein’s properties, where staff were told to “see nothing, hear nothing and say nothing”.

Judge Nathan said she agreed Maxwell had told staff at Epstein’s Palm Beach residence in Florida to be “blind, deaf and dumb.”

She also told jurors how Epstein would use sex toys on her “even though it hurt”, and she did not tell anyone about the abuse because she was “terrified” and “felt gross and ashamed”.

Maxwell’s trial also heard how she told another accuser, who testified under the pseudonym “Carolyn”, that she had a “great body for Epstein and his friends”.

Carolyn said the defendant had touched her breasts in Epstein’s massage room before telling her she had a “great body type”.

Jurors also heard how Carolyn had been introduced to the predatory pair through Ms Giuffre, and that she had been in the same room while Epstein and Ms Giuffre had sex.

The third accuser, who testified under the pseudonym “Kate”, said she had a schoolgirl outfit laid out for her by Maxwell before a sexualised massage with Epstein.

Kate said the defendant then told her to take Epstein his tea in the outfit, and when asked by the accuser why the outfit was on her bed, Maxwell said she “thought it would be fun”.

The jury was told Maxwell asked Kate if she knew of anyone who could come to her house and give Epstein oral sex because it was “a lot for her to do”.

The only accuser to testify under her full name, Annie Farmer, told jurors she was left “frozen” when the socialite asked her to undress for a massage and rubbed her breasts.

Ms Farmer said the defendant encouraged her to have a massage after teaching her how to rub Epstein’s feet at the age of 16.

Maxwell’s defence counsel had attempted to distance her from Epstein, but a series of photographs showed the close relationship the pair had.

Epstein was found dead in his cell at a federal jail in Manhattan in August 2019 while he awaited trial on sex trafficking charges.

The death was ruled a suicide.