"I think that is going to be my lot and I'm going to retire now. Having one is enough for me." 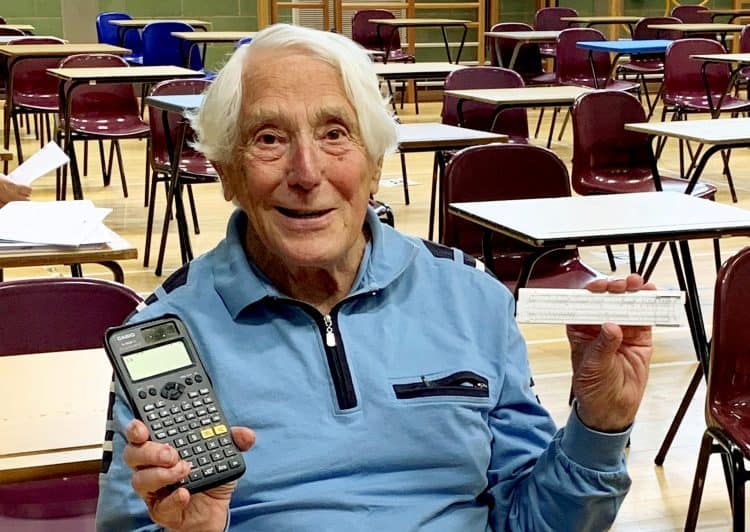 A sprightly pensioner has become the oldest person in Britain to ever pass a GCSE exam – at the grand age of 92.

Derek Skipper, 92, took his Maths GCSE in May and has passed with flying colours after he achieved a grade five, the highest possible on the foundation paper he took.

A grade five is the equivalent of a high B/low C in the old GCSE grading system.

The granddad-of-three has said he is ‘very pleased’ about his results.

“When I started out on the course in September, it was very low key and I didn’t tell anyone I was even doing it, as I thought if I don’t finish it then it’s embarrassing so I kept very quiet until Christmas time.

“The results didn’t matter to me at all, I was just doing it for my own fun.”

He added: “My family all think it’s a bit of fun, they’ve all laughed and if it gives people some pleasure then that’s fine.”

Speaking this morning, he said: “I opened up my email up this morning to find out I’ve got a five which is the highest I could get on the Maths GCSE exam I took.

“I’m delighted to have got it.”

Derek from Orwell, Cambs.,decided to take the exam ‘to keep his mind occupied’.

He did all of his lessons on Zoom, with a course run by The Cam Academy Trust in Cambridge.

Derek said: “I’m getting a little bit old, and I’m not doing as much in the garden these days.

“I wondered what I should get up to in the winter to keep my mind occupied.

“A leaflet came through the door from the local college, and I thought I would try and learn a bit more about Maths.

“Like most people who don’t understand Maths much, it gave me the opportunity to learn something.”

Derek has urged people to do the course, adding: “The local authority are very good in terms of facilities they offer.

“I think it is such a disappointment that people don’t take up these opportunities.

“On a Zoom system, it is so easy for elderly people as going out to college in the night time and the winter is not very nice.

“But when it comes to your door and you are sat in front of a screen with a good instructor, it is wonderful.

“Start the course this September, and go to your local college and turn around and say that you want to take an exam.

Derek said he was ‘surprised’ when he realised he was the oldest person ever to take his Maths GCSE.

He said: “I didn’t really give much thought into it, as it just never occurred to me that I might be the oldest person.”

As a youngster, he missed only one day at school during World War Two – when a bomb blew his front door on to his bicycle wheel and left him with a puncture.

Derek earned five School Certificates – the precursor to O Levels and the equivalent to GCSEs – including Maths which was gained with the help of a slide rule and book of tables.

And after leaving school, he signed up for the RAF at 18 to learn a trade and became a radar fitter.

He described himself as a ‘typical boy’ when he was in his school days.

Derek said: “It was just after the war and there was all of the bomb damage although it wasn’t very important to us.

“I certainly wasn’t academic by a very long way.

“I did my exams, and I did pass them but I was just doing something I was told I had got to do.

“Now having done it as a mature student, it all does make a bit more sense.

“I have started to understand a lot more about Maths, and it is quite interesting.”

Derek has also tried to persuade his wife of 61 years Nancy, to take a GCSE exam.

He added: “She has been supporting me and helping me out.

“I’ve tried to persuade her to have a go at it, but she’s a bit reluctant.”

He currently doesn’t have any plans to take any more GCSEs.

Derek said: “I think that is going to be my lot and I’m going to retire now.

“Having one is enough for me.”