The Hyundai IONIQ 5 has received widespread praise and acclaim. Does it justify its billing? We drove one for a week to find out. 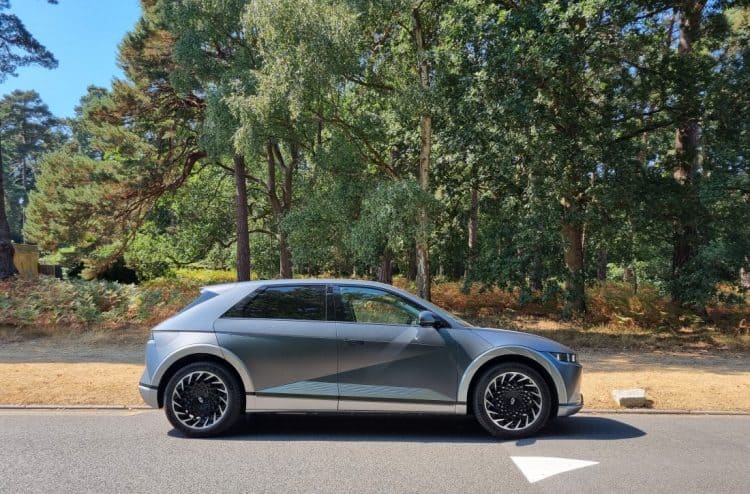 The EV (electric vehicle) revolution has offered several manufacturers a chance to reposition themselves within the automotive market. Over the past five years, the race to get EVs to market has been well and truly on. There has been a seismic shift in car sales, too, with 11.6% of new cars sold in the UK being EVs in 2021. That percentage is rising, so there is a significant opportunity for manufacturers in bringing to market the right car at the time, stealing a march on the competition. The Hyundai IONIQ 5 is a fine case in point. A bold new era for the Korean marque? Well, it certainly seems to have got off to a flyer, with the car tested here having been received to widespread acclaim, winning several car of the year awards across the media.

The outlandish aesthetics certainly help to announce it. It’s very 80s meets the 2020s, with square light decals and sharp creases; there’s something of the moon buggy about it. Equipped with striking 20” wheels, the Hyundai IONIQ 5 certainly doesn’t go unnoticed. Even if you don’t like the way it looks, it’ll certainly make you look twice.

Beauty, however, is only skin deep. Built upon a bespoke EV platform, the Hyundai IONIQ 5 also takes advantage of the interior opportunities offered by battery power to deliver a cavernous cabin. There’s plenty of room in here, with all the modern touches you’d expect, from wireless charging to an augmented reality head-up display, and a sweeping touch screen with all manner of functionality. So, what’s the catch?

Living with the Hyundai IONIQ 5

We’ll start with the negatives. The massive A-pillar makes it tricky to see the road when taking a sweeping right hand corner or turning right. You have to get the steering wheel in a just-so position to be able to see all of the info on the driver’s display. The edge of the touch screen is too far away, you have to lean out of your seat to get to it. And it has menus – lots and lots of menus. It’s overwhelming at first. There are no USB-C sockets, only USB. For the first time, I had to switch off the head-up display because it made me feel sick. This took a lot of searching through those myriad menus parked up at a bus stop two minutes from my house. There’s no wireless Apple Car Play or Android Auto.

Right, that’s the bad stuff out of the way.

The cabin in the Hyundai IONIQ 5 is brilliant. There’s so much space and you can move the centre console backwards and forwards to create more room in the front or back. It’s a simple feature, but surprisingly useful. You can slide the rear bench forwards and back, with the boot being 551ltrs or 584ltrs depending on this positioning. On hot days you can spread out and keep cool. The generous level of standard equipment is great. Heated and ventilated seats, Bose audio, 64-colour ambient lighting, LED headlamps, privacy glass, heated leather steering wheel, park assist… Buying a Hyundai IONIQ 5 is a simple decision with no agonising over an extensive options list.

The model tested is the Hyundai IONIQ 5 Ultimate, the top spec addition. £48,150, it comes fully loaded. The matte grey paint comes in at £685 and that’s your options list done with. Easy.

The sense of simplicity extends to the driving experience in the Hyundai IONIQ 5. This is the least stressful car I’ve ever driven. Seriously. Supremely comfortable, easy to get to grips with, unfussy and not trying to be something it’s not. Commuting to work? Sit back and enjoy the stereo. Cruising along the motorway? No need to panic about the range because the available mileage displayed is actually what you’ll achieve. This takes some adjusting to if you’ve driven any other EV. They tend to lie, or worse, assume you’ll drive like a feather-footed saint.

Not that the Hyundai IONIQ 5 encourages you drive like Mad Max. Far from it. The 73kWh battery in the RWD model here produces 271 hp and 350Nm torque. That won’t set tongues wagging down the pub, but it will push this two-tonne car from 0-60mph in seven seconds.

That weight makes itself felt along a B-road. You get the wonderfully serene progression that is the hallmark of EVs, before panicking slightly at the first bend that you might be carrying too much speed. Yeah, there’s a bit of understeer if you eschew the relaxation vibes.

It’s not, however, boring. Because you have to think about what you’re doing, making progress can be enjoyable. Whilst the steering isn’t loaded with feedback, it’s perfectly in tune with the nature of the Hyundai IONIQ 5. You do wonder what this car might become once Hyundai’s N division has run the rule over it. An EV version of the i30N and i20N? Make it happen!

Minor irritations include the lane keep assist, which is easily turned off, and the fact it thinks you’re constantly on the verge of crashing. Approaching traffic lights, stopped cars, passing cyclists – the Hyundai IONIQ 5 will let you know.

The longer you spend with the Hyundai IONIQ 5, the more you fall for its charms. Put simply, it’s an impossible car to dislike. It’s irritations quickly become character and the pros far outweigh the cons. Those foibles would iron themselves out with ownership. You’d get used to the menus, buy adapters for your cables and laugh whenever it panics about your imminent demise.

Stylish and contemporary, the Hyundai IONIQ 5 fits its space in time superbly. Crucially, it also feels like a c.£50k car, which isn’t always the case with EVs. The simplicity of Hyundai’s approach is a further tick in the box, with the base price being, well, the actual price. That’ll never catch on among European manufacturers.

If EVs do indeed represent a seismic shift in the market, then there’s a huge opportunity for manufacturers such as Hyundai. On the evidence of the Hyundai IONIQ 5, it’s an opportunity they’re grasping with both hands. It’s spacious, practical, aesthetically striking, packed with technology and oh so easy to use.

If you’re looking for a family EV, you’d be crazy not to take a closer look. A lot has been written about the Hyundai IONIQ 5 and most of that has been positive. It’s easy to see why. Even after a day reviewing the Porsche Taycan 4S, returning home in the Hyundai IONIQ 5 didn’t feel underwhelming. It was nice to have the space and air-conditioned seats to relax in as it sailed along the M4. Two very different cars, certainly, but two cars that point to a bright EV future.