Trials start tomorrow for activists arrested for protesting against DSEI arms fair last September in London’s Docklands. DSEI (Defence & Security Equipment International) is one of  the world’s largest arms fair, bringing together arms buyers and sellers to network and make deals. Critics point out that the taxpayer sponsors entertainment of some of the world’s […] 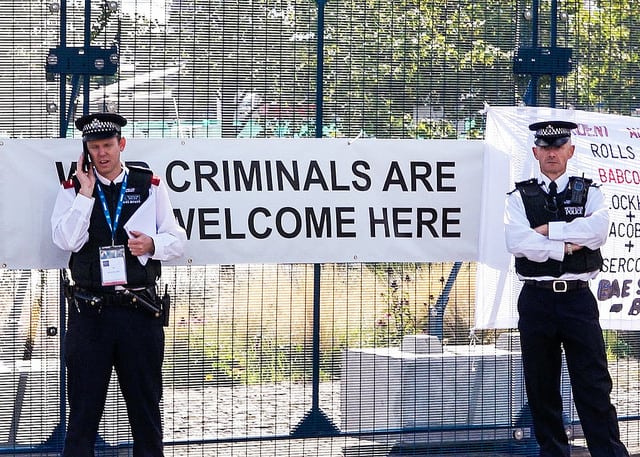 DSEI (Defence & Security Equipment International) is one of  the world’s largest arms fair, bringing together arms buyers and sellers to network and make deals.

Critics point out that the taxpayer sponsors entertainment of some of the world’s most repressive regimes invited to the UK for DSEI to buy and sell weaponry.

Even London Mayor Sadiq Khan has hit out, insisting he is “opposed to London being used as a market place for the trade of weapons to those countries that contribute to human rights abuses” yet powerless to stop the arms fair.

Over 100 activists were arrested at DSEI last September and though many charges have been dropped, 43 activists will be on trial for ‘obstruction of the highway’ in the weeks ahead at Stratford Magistrates Court. The defendants on trial this week are Matt Fawcett, Bryony Moore, Brigid-Mary Oates, Guillame Chome (all from Yorkshire CND), Angie Zelter, from Knighton in Wales, Margaret Bremner from Edinburgh, Randall Harford from Bristol, Barbara Cookson from Liverpool and Genny Scherer, from London. All have been charged with ‘obstruction of the highway.’

Last year eight protesters were acquitted of trying to stop a previous DSEI fair in a court case that ruled there was “clear, credible and largely unchallenged evidence from the expert witnesses of wrongdoing at DSEI and compelling evidence that it took place in 2015”. Over 100 activists were arrested at DSEI last September and though many charges have been dropped, 43 activists will be on trial for ‘obstruction of the highway’ in the weeks ahead at Stratford Magistrates Court.

Andrew Smith of Campaign Against Arms Trade (CAAT) said: “The policing at DSEI was totally inappropriate and very heavy-handed, with over 100 arrests for taking part in peaceful protests and direct action. The protesters rightly opposed the presence of human rights abusers and arms dealers. The way that the police behaved was bang out of order.

Polling by CAAT done prior to DSEI found that 76% of UK adults oppose arms exports to repressive regimes and 64% oppose government support for arms fairs that include representatives from governments with poor human rights records. The full list of guests, who were wined and dined by our public servants this time include regimes with appalling human rights records, such as: Algeria, Bahrain, Egypt, Kuwait, Oman, Pakistan, Philippines, Qatar, Saudi Arabia, Turkey and United Arab Emirates and Vietnam.

Exhibitors such as Israel pitched up. Israel has been criticised by human rights watchdogs for among other things supplying Myanmar with over 100 tanks, boats and light weapons. These sales have continued as the Burmese army have been implicated in atrocities against the Rohingya Muslim minority in Myanmar.

The government and military delegations invited by the Defence and Security Organisation, which is part of the taxpayer funded UK Department for International Trade include Saudi Arabia. Saudi Arabia is criticised heavily for the horrendous civilian casualties, famine and massive cholera epidemic linked to its bombing of Yemen. Russia was also revealed to be attending – the main weapons supplier of the Assad regime in Syria, where an unprecedented refugee crisis continues to destabilise the entire region.