"A quick Google search reminds us how they've obsessively tried to bring him down over the years," one person said. 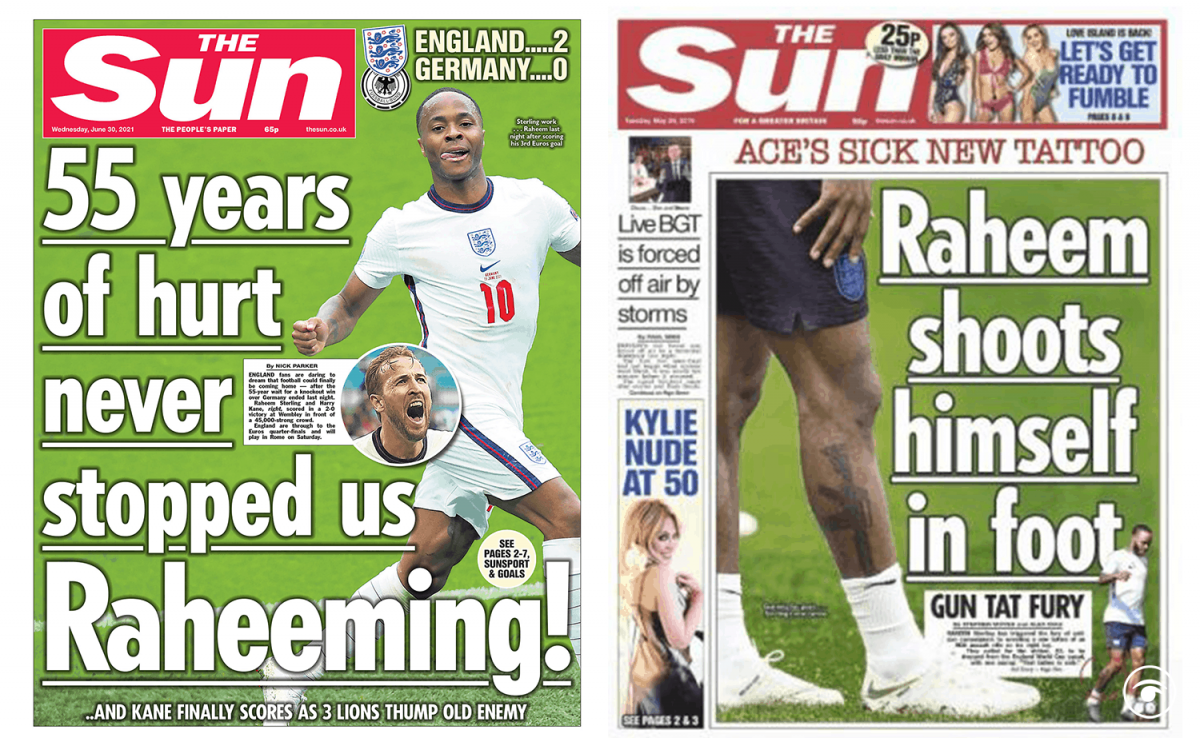 The hashtag #dontbuytheSun was trending on Twitter this morning after the redtop lauded England midfielder Raheem Sterling following his blistering performance against Germany last night.

The Manchester City midfielder fired England into the lead in the 75th minute to line up a quarter-final game against Ukraine in Rome on Saturday.

He described England’s 2-0 Euro 2020 win against Germany as “a special moment” and credited an “all-round great team performance.”

The Sun was one of only a few papers to splash the star on their front page, but no sooner had the paper hit the shelves had people pointed to the hypocrisy of the coverage.

Journalist Paul Johnson said it was “shameful” that they would laud the attacking midfielder after printing front pages just as “obscene Raheem” following previous tournament knock-outs.

Chris Rand also questioned their decision to “idolise” Sterling after chastising him so vehemently in the past.

The Sun's front page tomorrow is devoted to idolising Raheem Sterling. A quick Google search reminds us how they've obsessively tried to bring him down over the years.#DontBuyTheSun pic.twitter.com/flhnRqdagr

One noteworthy headline came from 2018, when The Sun accused Sterling of “shooting himself in the foot” with a gun tattoo.

They appeared to pin the body art to a story about two teenagers who had been fatally stabbed, saying he was “glamorising” the use of weapons.

Poet and journalist Musa Okwonga tweeted at the time, “The Sun and the Daily Mail seem to take it almost in turns [to] go after Raheem Sterling, apparently for no reason other than he is black and successful,” while Gary Lineker spent the day rebuffing Piers Morgan’s apparent outrage over the tattoo.

As you celebrate Raheem Sterling’s fantastic performance tonight for #ENG remember (not that you needed reminding) that football fans say #dontbuythesun The awful pictures below remind us all why we must never ever buy the Sun! #jft96 pic.twitter.com/yTiVFBLNxP