Activists slammed 'irresponsible' English tourists putting the attempts to contain the virus in Scotland at risk. 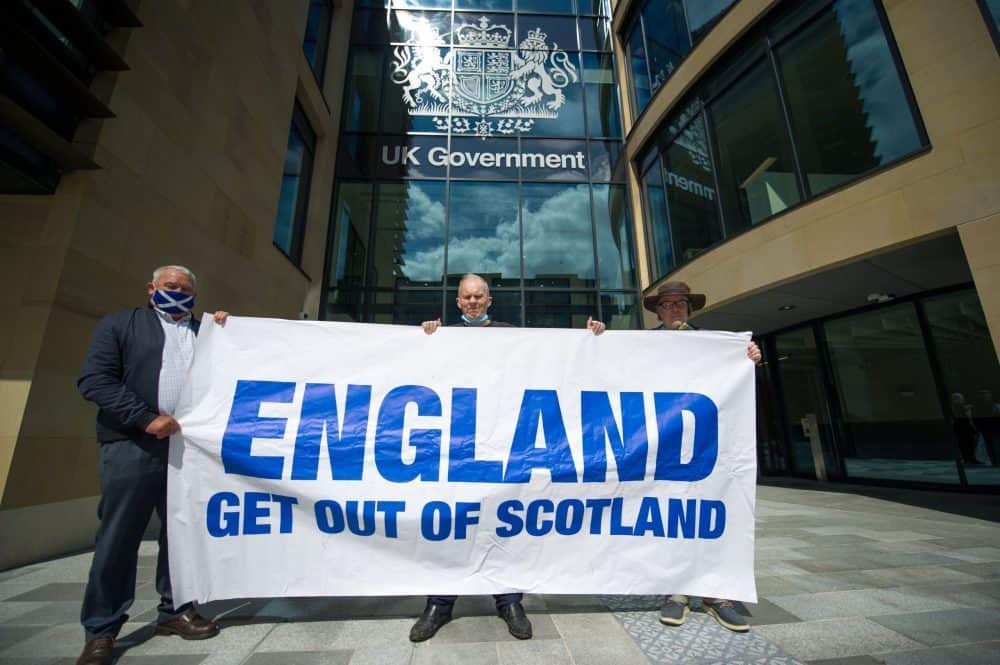 Protestors demanding ‘England Get Out of Scotland’ demonstrated outside the UK Government base in Edinburgh.

Campaigners from Action For Scotland turned heads with a banner drop at Waverley Station and the Queen Elizabeth House at Waverley Bridge.

They are demanding the Scottish Government closes borders and transport hubs linking England and Scotland in a bid to stop the spread of coronavirus.

Activists slammed ‘irresponsible’ English tourists putting the attempts to contain the virus in Scotland at risk.

Mr Clerkin said: “Our protest today at the British or English Government HQ Queen Elizabeth House is to demand that our border with England be closed immediately so that COVID-19 is not allowed to spread throughout Scotland by people coming up from England.

“Scotland is a colony of the British or English state and we will only ever truly control our borders with Scottish independence.

“If we were an independent nation we would already have closed our border with England further preventing the spread of COVID-19 in Scotland.

“Instead we will continue to suffer as we did the irresponsible behaviour by 34 English tourists at a Airbnb at Glen Etive with most of them from Manchester which is supposed to be under restrictions because of a high level of Covid-19.

“The English government is only interested in financially raping and exploiting Scotland to further its own interests.

“The people of Scotland are increasingly being put at risk from COVID-19 by a lack of border controls and we are demanding that the border is closed immediately.”