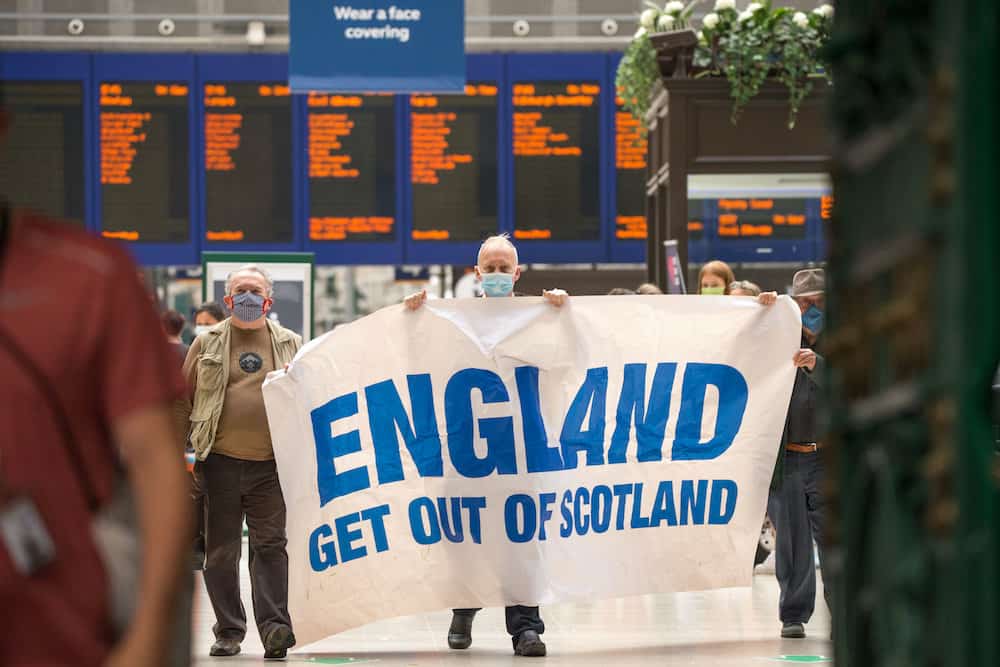 Protesters at one of the country’s busiest railway stations with a banner reading ‘England Get Out of Scotland’ in a bid to stop non-essential travel from down south.

The same activists have previously targeted the border at Berwick, where motorists were shocked to see people wearing Saltair face masks demanding the border was closed.

However the campaigners, from Action Scotland, insist they are not motivated by racism or xenophobia but believe closed borders could eliminate the virus in Scotland by the end of August.

Sean Clerkin, 59, said: “The police were called, we are calling for stricter border controls with regards to points of entry due to Covid-19.

“In all the regions of England it is clear that the R rate of reproduction is either just below 1, or is on 1 and parts of the northwest of England including West Yorkshire, Greater Manchester and East Lancashire have been put into lockdown.

“All we are saying is anyone of any nationality who is planning to travel from England for non-essential reasons, please do not.

“We are calling on the Scottish Government to implement quarantine measures just like with Spain.

“The banner is just to get attention, we want to protect everyone in Scotland whatever their nationality.

“We want to drive the virus down to elimination and we fully support Devi Sridhar the Scottish Government’s advisor.

“We can drive the virus down to the point of elimination by the end of August, but we need to Scottish Government to be brave enough to say ‘please implement border controls’.

“Essential travel is different, we are not against that, but we need to limit the numbers for health reasons.

“We want to protect English people in Scotland as well as all nationalities.”