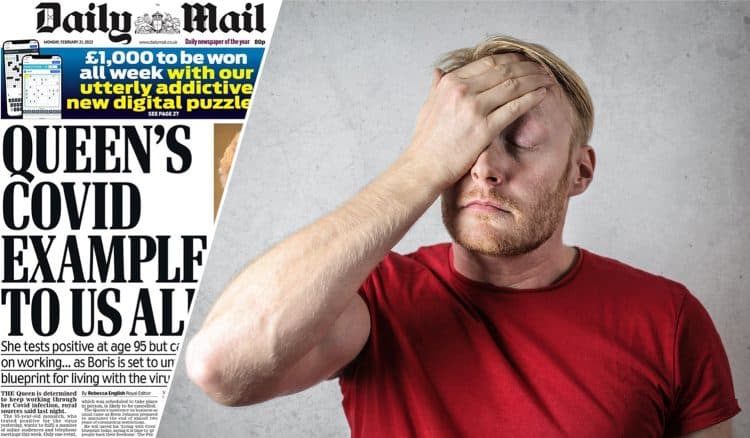 The Queen has “set an example to us all” after catching Covid-19, according to a bizarre Daily Mail front page.

The newspaper credited the monarch for “carrying on working” at the age of 95 despite being struck down by the virus.

It was announced yesterday that the Queen is experiencing “mild cold like symptoms” after testing positive for Covid but expects to be at her desk carrying out “light duties”.

The diagnosis follows a string of Covid cases among the royal family and the Queen’s Windsor Castle team, with the Prince of Wales meeting the monarch the week he tested positive, and the Duchess of Cornwall also isolating after contracting the virus.

“Her Majesty is experiencing mild cold-like symptoms but expects to continue light duties at Windsor over the coming week.

“She will continue to receive medical attention and will follow all the appropriate guidelines.

The Royal Household has its own royal physicians and the Queen’s doctors will be on hand to take care of and monitor the head of state, with Professor Sir Huw Thomas, head of the Medical Household and Physician to the Queen, expected to be in charge.

It is understood the Queen is following Covid guidelines on self-isolating after testing positive but prime minister Boris Johnson is expected to repeal all pandemic regulations that restrict public freedoms in England when he lays out his vision for the future on Monday.

In an interview with Sophie Raworth broadcast on BBC Sunday Morning, he said the Government must now encourage personal responsibility.

Reactions to the Daily Mail’s front page were quick to flood in on social media.