"We can't afford getting all the homeless people off the streets but we can afford fighter jets to fly down so Johnson can have his PR photoshoots. We all paid for that." 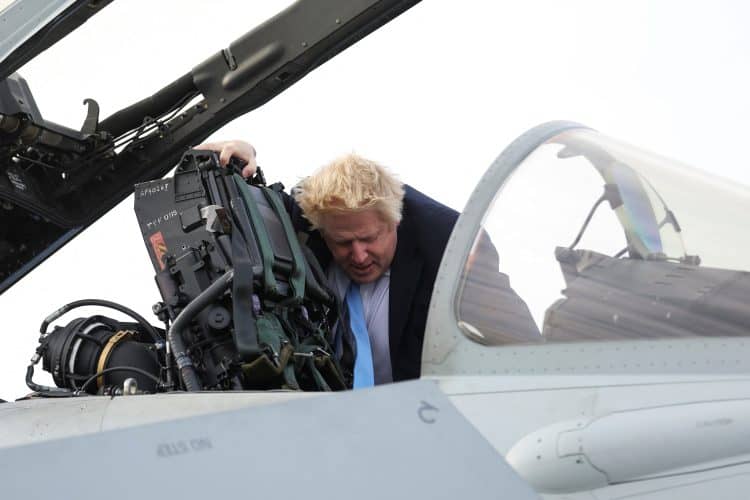 A Royal Air Force aircraft travelled hundreds of miles from a base in Scotland ahead of a photoshoot with the Prime Minister, before flying straight back. The news sparked fury at the PM who claims he is at the forefront of tackling climate change.

Photos of Boris Johnson with two RAF aircraft made newspaper front pages on Friday after his visit to RAF Waddington in Lincolnshire on Thursday.

An RAF P-8A Poseidon, which Mr Johnson was pictured standing in front of, was flown a distance of more than 330 miles from its base in Lossiemouth, Moray.

The plane, a maritime patrol aircraft designed for anti-submarine warfare, departed from its base shortly before 9am on Wednesday.

It then flew back on Thursday, leaving at approximately 6.20pm, after the Prime Minister completed his visit to the base.

Having been manufactured in Seattle, the aircraft arrived in the UK in November 2021, and has flown just six times since, according to flight tracking website Flightradar24.com, including the trip to Waddington where it was pictured with the Prime Minister, and its return journey.

It had never previously visited the Waddington base.

Mr Johnson was also pictured with his thumbs up sitting in an RAF fast jet, which was flown from its home base of RAF Coningsby, which is 15 miles away from RAF Waddington.

Speaking to reporters at the base, the Prime Minister said he was visiting to “talk to some of our crew, the officers who are involved in very, very important intelligence-gathering and surveillance”.

He added: “Some of the planes here today are going to be used very shortly over the border in Belarus, in Poland, and elsewhere over Ukraine, to see what’s going on and to allow us to have even finer detail evaluation of the military dispositions there.”

Both the Typhoon Mr Johnson was pictured sitting in, and the P-8A Poseidon were flown back to their respective bases after his visit.

The Ministry of Defence announced on Wednesday that four additional Typhoon jets had been deployed to Cyprus to patrol the skies over eastern Europe.

HMS Diamond, a Type 45 destroyer, is also preparing to deploy to the eastern Mediterranean alongside other Nato vessels.

The UK has also doubled the number of personnel deployed in Estonia as part of Nato’s Enhanced Forward Presence mission.

An MoD spokesperson said: “All the aircraft positioned at RAF Waddington conducted training flights before and after the visit.

“This enabled a small number of aircraft to be used to demonstrate how the RAF defends the UK and our Nato allies across Europe.

“At no point did this impact on any ongoing operations.”

The PA news agency asked the MoD to explain the nature of the training but did not receive a response.