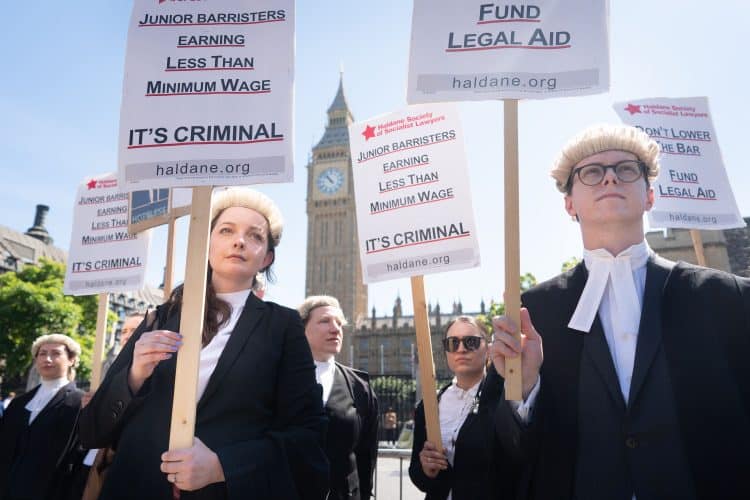 Criminal barristers in England and Wales are set to embark on a continuous strike after their row with the Government over pay intensified.

Members of the Criminal Bar Association (CBA) have been walking out on alternate weeks and have voted in favour of an indefinite, uninterrupted strike.

The all-out strike effectively begins when the industrial action resumes on Tuesday, although the official start date is September 5, because the ongoing pattern of one-week-on, one-week-off walkouts is continuing in the meantime.

On Friday, when barristers had their last working day ahead of the escalating action, the CBA’s chairman, Jo Sidhu QC, had to apologise to the Recorder of London, Judge Mark Lucraft QC, for missing a court hearing while taking part in the strike.

Mr Sidhu is representing a vulnerable man charged with murder at a trial due to start at the Old Bailey in October.

Last week Labour leader Sir Keir Starmer accused the Government of doing “absolutely nothing” to resolve industrial disputes as it emerged the Justice Secretary was on holiday as the results of the ballot were announced.

Dominic Raab was on leave with his family in Surrey until Thursday, although a spokeswoman said he was regularly in contact with Ministry of Justice (MoJ) officials.

He has not met the CBA since members embarked on industrial action in April, but junior ministers have met the group regularly.

The former foreign secretary came under fire in August last year for being on holiday in Crete during the Taliban takeover of Afghanistan’s capital Kabul.

According to MoJ figures, more than 6,000 court hearings have been disrupted as a result of the dispute over conditions and Government-set fees for legal aid advocacy work.

Criminal barristers are due to receive a 15% fee rise from the end of September, meaning they will earn £7,000 more per year.

But there has been anger that the proposed pay rise will not be made effective immediately and will only apply to new cases, not those already sitting in the backlog waiting to be dealt with by courts.

Mr Raab accused barristers of “holding justice to ransom”, writing in the Daily Mail: “My message to the CBA is simple.

“We are increasing your pay. Now your actions are only harming victims, increasing the court backlog, and hampering our efforts to make our streets safer.

But the Victims’ Commissioner for London, Claire Waxman, blamed Mr Raab’s “inaction” and said “the only ones responsible for holding ‘justice to ransom’ are those who have failed to fund a functioning justice system”, as she warned justice will “grind to a complete standstill” as a result of the strike, with thousands of victims affected.