Climate change: Richer countries have a ‘responsibility’ to help Pakistan

Ahsan Iqbal said Pakistan was feeling the effects of climate change caused by richer nations and their "irresponsible development". 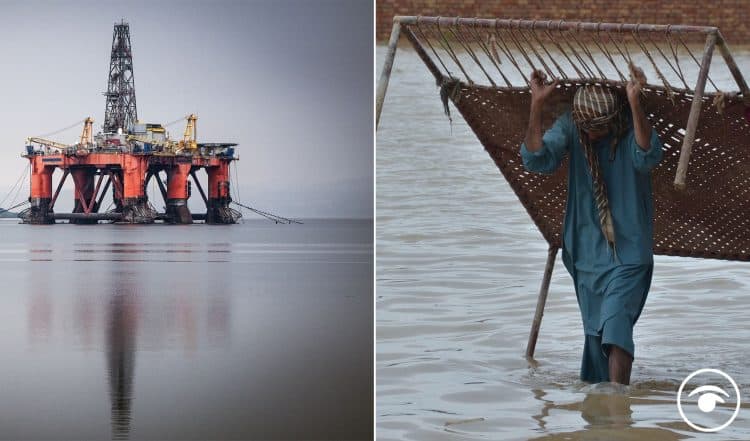 Richer countries have a “responsibility” to help Pakistan deal with flooding and prevent future disasters because they’ve caused climate change, its planning minister has said.

More than 1,000 people are reported to have died so far and over a million homes have been damaged.

Pakistani authorities backed by the military, rescuers and volunteers have been battling the aftermath of the floods that have affected more than 33 million people, or one in seven Pakistanis.

“Our carbon footprint is lowest in the world,” said Mr Iqbal.

One assumes that the UK government will pledge some kind of assistance to Pakistan to deal with the crisis in real-time.

However, in the long term the Tories are rushing to drill more oil and gas from the North Sea.

Liz Truss will give licences the green light if she becomes the next PM.

Also, Jacob Rees-Mogg has been meeting oil and gas companies in a bid to boost North Sea supplies amid an ongoing energy crisis, reports City A.M.

Mr Rees-Mogg is also understood to have met with energy giant Shell and Total, but there is some confusion as to whether he was simply performing his role as a Brexit Minister or attending as a Liz Truss supporter.

In the worst warning yet, energy consultancy Auxilione forecast a £7,700 bill from April 2023 – with gas costing consumers 34.22p per kWh.

Forecasts of what the next capped energy price for 24 million households could be have continued to rise as international gas prices show no sign of cooling down, a team of experts has warned.

The energy price cap, which is set to nearly double from already record highs at the start of October, could reach more than £5,600 by the start of next year, and then rise even further, under the latest estimates.