"Stop telling me I was right and listen to what I'm saying now." 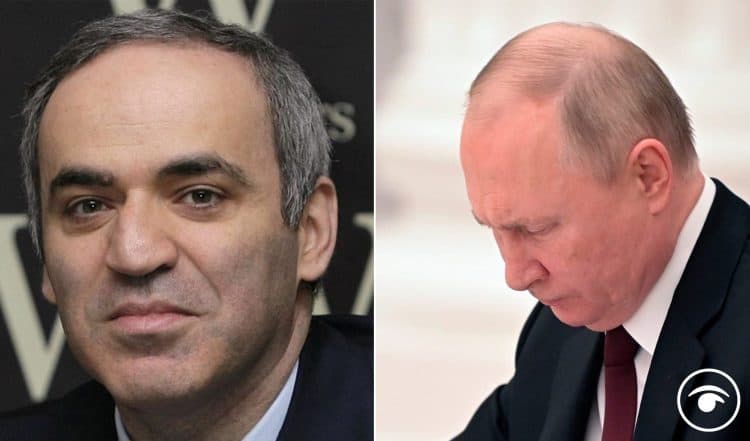 Ukrainian president Volodymyr Zelensky has demanded tougher sanctions and support fending off the Russian invasion as Kyiv was hit by air strikes.

Downing Street said the prime minister pledged further support “in the coming days” after the president updated him on the “terrible developments” in the Ukrainian capital.

Meanwhile, Garry Kasparov, a vocal opponent of Vladimir Putin, took to Twitter to give his recommendations on how to deal with Russia’s aggression and a warning not to ignore his calls to deal with the leader ever again.

He wrote: “Ok, after years of warnings were ignored and hearing “Garry, you were right!” all damn day today, I’ll repeat what I said in 2014: Stop telling me I was right and listen to what I’m saying now. My recommendations follow:”

“-Support Ukraine militarily, immediately, everything but boots on the ground. All weapons, intel, cyber. -Bankrupt Putin’s war machine. Freeze & seize Russia’s finances & those of him and his gang. -Kick Russia out of every intl & financial institution. PACE, Interpol, etc”

“Recall all ambassadors from Russia. There is no point in talking. The new unified message is “stop or be isolated completely”. -Ban all elements of Putin’s global propaganda machine. Turn them off, shut them down, send them home. Stop helping the dictator spread lies & hate.”

“Expose and act against Putin’s lackeys in the free world. If Schröder and his ilk continue to work for Putin, bring charges. Ask the owners & advertisers of networks platforming Putin propagandists like Carlson why they allow it.”

“-Replace Russian oil & gas. Pressure OPEC, increase production, reopen Keystone. You can’t save the planet if you don’t save the people on it. -Acknowledge there will be costs, sacrifices. We waited to long, the price is high, but it will only get higher. It’s time to fight.”

He ended with a warning to Putin apologists…

“Cannot ignore the political 5th column of Putinists, from the far right & left in EU to the tankies & Trump & his GOP followers in the US. They may have the right to support a brutal dictator’s war in order to criticize Biden, but it’s disgusting and anti-American. Do not forget.”