Clive Myrie was broadcasting in front of St. Michael's Golden-Domed Monastery in Kyiv as sirens blared around him. 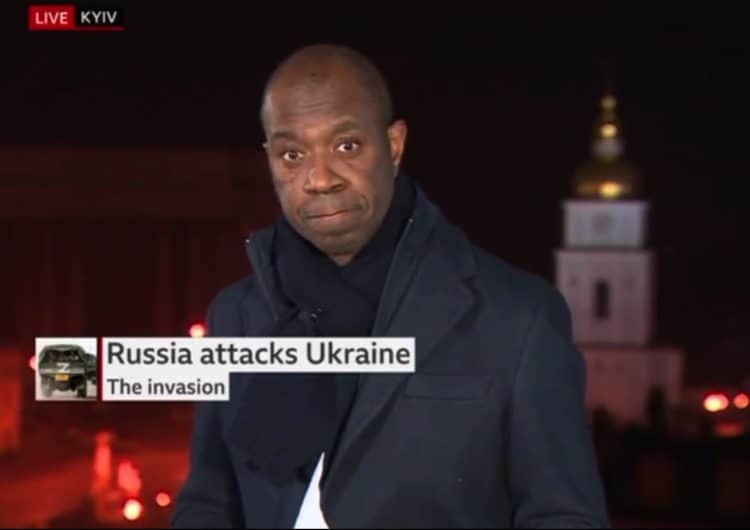 A BBC journalist appeared to shed a tear while reporting on the Russian invasion of Ukraine last night.

Clive Myrie, who is currently stationed in Kyiv, broadcast the latest developments in the conflict in front of St. Michael’s Golden-Domed Monastery as sirens blared around him.

He told viewers that “fierce fighting” was taking place and said Russia had attacked Ukraine “by land, sea and air” on a brutal day of violence and bloodshed as the invasion got underway yesterday.

Then, as he introduced BBC News international correspondent Orla Gueri, a tear visibly streaked down his face.

Dozens took to social media to share their shock at the scene.

One person wrote: “Extraordinary! Clive Myrie presenting the @BBCNews at 10 from Kyiv with a tear rolling down his cheek.”

Another said: “Wow, a tear ran down the face of Clive Myrie just now while presenting the BBC News at 10.”

Ukrainian president Volodymyr Zelensky has ordered a full military mobilisation to counter the Russian invasion which he said had led to 137 deaths.

In a decree issued late on Thursday, he said the the mobilisation would last 90 days.

He tasked the military’s general staff with determining the number of people eligible for service and the number of reservists as well as the order of the call-up.

President Zelensky said 137 civilians and military personnel have been killed so far in the invasion of his country.

He called them “heroes” in a video address released early Friday in which he also said hundreds more have been wounded.

“Will never be forgiven”

Mr Zelensky said that despite Russia’s claim it is attacking only military targets, civilian sites also have been struck.

In his words: “They’re killing people and turning peaceful cities into military targets. It’s foul and will never be forgiven.”

The UN Security Council will on Friday vote on a resolution that would condemn Russia’s military aggression against Ukraine “in the strongest terms” and demand an immediate halt to Russia’s invasion and the withdrawal of all Russian troops.