"Draconian policies enshrined in the Nationality and Borders Bill and their (the Government’s) Rwanda deal are doing little to deter desperate people jumping on boats because they do nothing to address the reasons people come”. 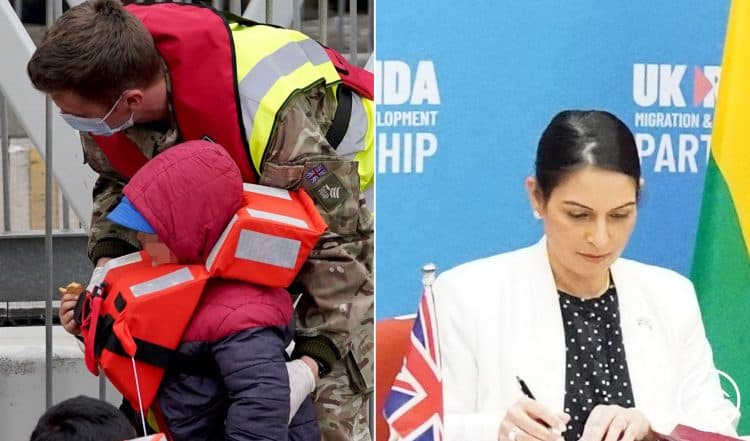 Refugee charities said the Government’s plan to send migrants to Rwanda has done little to deter people from making the perilous journey to the UK, as Channel crossings resumed at the weekend.

Some 254 people were detected in small boats crossing from France on Sunday after an 11-day pause in such trips.

More people thought to be migrants were taken to Dover on Bank Holiday Monday, including children, with the BBC reporting that more than 100 migrants had been brought to shore by the afternoon.

The official figures for Monday’s crossings from the Ministry of Defence (MoD) are not expected until Tuesday.

Confirmation of Sunday’s figures from the MoD came after what is believed to have been an 11-day break in activity around the Channel from April 20 to 30, when no crossings were recorded amid reports of strong winds and choppy seas.

The MoD took over control of migrant operations in April, when the Government also announced controversial plans to send some of those making the cross-Channel journey to Rwanda.

The Government’s Nationality and Borders Bill – dubbed the anti-refugee Bill by campaigners as it makes it a criminal offence to knowingly arrive in the UK illegally and includes powers to process asylum seekers overseas – became law on Thursday.

But refugee organisations said the Bill does “nothing to address the reasons people come”, with one charity saying the majority of migrants it spoke to said the plan will not put them off crossing to the UK.

The Rwanda deal will see the east African nation receive asylum seekers deemed by the UK to be inadmissible, having arrived “illegally” under new immigration rules.

Care4Calais said that of the 64 people it surveyed, 87% had heard of the plan and 75% said “it won’t put them off crossing to the UK”.

In a Twitter post, the organisation said: “They have no choice: they’ve fled danger made long, dangerous journeys, and France ‘does not give you security’, as one said.”

The charity branded the Rwanda deal – which Home Secretary Priti Patel has described as a “world-first” agreement – as “just another in a long line of deterrence policies announced by this Government over the last few years”.

Care4Calais said: “Refugees have escaped from the worst horrors in this world. When you’re risking your life, what else do you have to lose? When someone explains ‘even death wouldn’t stop me’ trying to get to the UK, it’s clear that even the threat of Rwanda won’t change anything.”

Such sentiments were echoed by Pierre-Henri Dumont, French National Assembly member for Calais.

He told BBC Radio 4’s The World At One programme: “When you leave your country because of flood, because of starvation, because you are not afraid of being hauled and sent back to another country, at least if you have a chance you will try.”

Enver Solomon, chief executive of Refugee Council, said the resumption of crossings at the weekend showed that “draconian policies enshrined in the Nationality and Borders Bill and their (the Government’s) Rwanda deal are doing little to deter desperate people jumping on boats because they do nothing to address the reasons people come”.

He called on the UK to have a “grown-up conversation with France and the EU about sharing responsibility”.

He said: “We need a fair and humane asylum system, with means well thought-out, long-term solutions that address why people are forced from their homes, and provides them with safe routes to the UK.”

Sunday’s figures mean at least 6,947 people have reached the UK since the start of the year after navigating busy shipping lanes from France in small boats, according to data compiled by the PA news agency.

Typically there can be periods of several days or weeks without migrant crossings, often depending on weather conditions.

Two longer gaps of 16 and 13 days without crossings were recorded earlier this year, before the Rwanda deal was announced.

The longest period without any crossings so far in 2022 was 16 days, between January 27 and February 11, PA analysis of Government figures shows.

Labour leader Sir Keir Starmer said there needs to be “an international co-ordinated criminal response” to tackle the “criminal gangs” that he said are driving the migrant crisis.

Speaking on the campaign trail in Worthing, West Sussex, he said: “I know what can be done if you’ve got teams working together across Europe all the way along those routes, absolutely bearing down on these criminal gangs, and working very closely with the French authorities as well.”

Mr Solomon reminded people that those “coming across the channel are fleeing atrocities like those in Ukraine and Afghanistan”.

Care4Calais said there is no longer a build-up of Ukrainians in Calais “because they can apply for visas from anywhere”.

Renewing their call for the option of visa applications for all refugees, the charity added: “The answer to many problems in Calais is to let refugees apply for visas to cross the Channel safely, because now – unless you’re Ukrainian – there’s no safe way for a refugee to get to the UK and claim asylum. That would put people smugglers out of business and save lives.”