"Brexit is a lose-lose situation, nobody will benefit from it. There is no good Brexit." 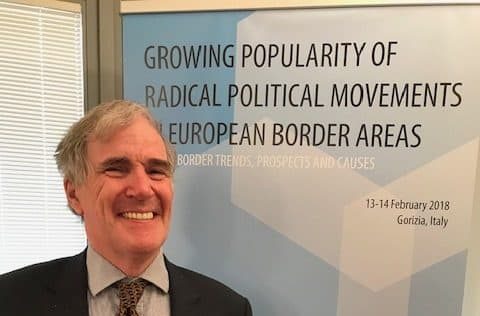 Donnelly will be fighting for an MP seat in the constituency on 17 June. It follows the death of Tory MP Dame Cheryl Gillan last month, who represented the area for almost three decades.

Rejoin EU was founded in 2020 and ran candidates in the London Mayoral and Assembly elections, finishing in the top half for mayor.

They also came sixth out of 18 parties vying for votes in the London Assembly election.

Who is Brendan Donnelly?

Brendan Donnelly was a Tory MEP between 1994-1999 and a diplomat, and now runs an educational charity.

He told The London Economic that there has been a tendency to break apart from the EU since then.

He was disappointed when Ken Clarke stood for Tory Party leadership in 1997 and was not elected “because of his pro-EU views”, despite being “the best man”.

Donnelly said: “I was following what was happening in the Tory Party and I saw how the anti-EU stance it was becoming stronger and stronger.”

He thinks the way the Tories have handled the Brexit process since the referendum has been “very bad” and showed “great incompetence” in negotiations.

He said: “Brexit is a lose-lose situation, nobody will benefit from it. There is no good Brexit.

“We are only now beginning to see the economic, social and constitutional effects of Brexit.

“Brexit is putting at risk the unity of the United Kingdom, and making it poorer and more isolated in the world.

“Businesses are suffering from new red tape, having been promised the contrary.”

He added: “The obvious failure of Brexit needs to be reversed in the national interest and in the interests of Chesham and Amersham.

“My candidature in Chesham and Amersham is a part of what I hope will be a gathering campaign to rejoin the EU as more voters realise the harm inflicted by Brexit. Brexit is broken and it is breaking Britain.

“The main goal will be to advocate for an early return to the EU but we are not standing just because we want to get elected, we want to start a conversation and demonstrate that there are a lot of people who want to rejoin the EU as soon as possible.”

Brendan thinks attempts to mitigate the effects of Brexit by simply rejoining the single market or customs union are “unworkable” and “illogical”.

He believes only fully rejoining the EU can avoid the economic and constitutional damage that Brexit is increasingly inflicting on the country.

“We are happy to have such a knowledgeable and experienced candidate as Brendan,” he said.

Hewison added: “Rejoin EU will be the only party in this by-election advocating rejoining the EU without any ifs or buts.

“The outcome of this by-election cannot change the Conservative majority in Westminster.

“It is however an opportunity for those many people who wish to rejoin the EU to support the Rejoin EU Party and a candidate who will campaign unambiguously for this to come about.”

Related: Rejoin EU Party ‘well on the way’ to do what it says on the tin