We hear the views of Renew, Rejoin EU and Burning Pink as they put forward their case for the London mayor election. 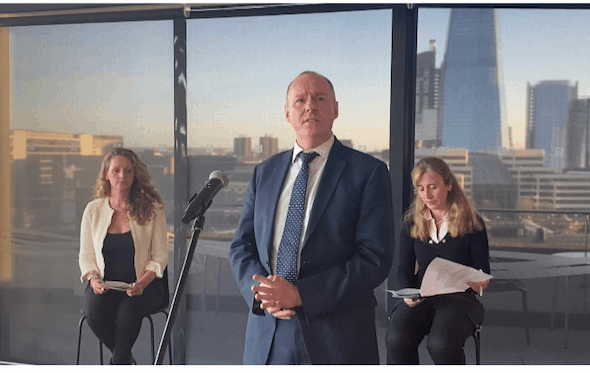 With a record 20 candidates standing for London Mayor on May 6, a challenger hustings event was held in the city with representatives from fringe parties given a chance to put forward their case.

The event was organised by Renew Party. Leader James Clarke said candidates not tied to Westminster parties do not get a chance to make their case in newspapers and on TV.

“We are talking about the end of the world here”

Roger Hallam stood in for candidate Valerie Brown, who was arrested during an Extinction Rebellion protest in Canary Wharf.

Hallam left the hustings whilst they were underway, expressing disappointment about having to fit his answers in a minute and a half.

Before leaving, he said: “Why don’t we have a three-hour conversation? We are talking about the end of the world here. Let’s get real, people!”

Clarke expressed his disappointment at the departure, saying the event was focused on compassion, collaboration and respect.

What could a London mayor do to re-establish trade links with Europe, given that the mayor can’t dictate foreign policy?

Balayev said: “I think London mayor has a lot of indirect, emotional powers and in order to affect those processes that are happening with Europe, the mayor needs to team up with our Foreign Office and work together.

“We need to make sure that London is open and remains part of Europe and Europe should be very close to London.”

Hudson said: “The mayor is responsible for setting the cultural tone of the city. In our case, we need to reimagine ourselves as that compassionate, sustainable city. If we get that right, we can be a beacon for the rest of the world and inspire people to come here and connect with us.

“We will be prioritising this compassionate living with festivals and events which show us how to lead compassionate and sustainable lives, that is how we will reconnect with the rest of the world.”

Hewison said: “We are proposing a Brexit bureaucracy buster office which is going help small businesses across London to negotiate the relationships we have with the EU.

“We need to set up regular diplomacy forces to go out and argue the case for London, hopefully in conjunction with the UK government, I am not quite sure the Foreign Office will be too helpful but we need to keep the trade routes open.

“If you want to get Brexit done, elect Rejoin EU for the mayor of London, nothing will get rid of Brexit quicker, I can assure you of that.”

What would candidates do to support EU citizens if they were a mayor?

Balayev said: “I am going to extend the scheme of settlement for another two years.

“Europeans who live in London are Londoners. A lot of Londoners were born in Europe and we need to recognise that.

“They are very important, and I will do everything possible to make sure they feel home.”

Hudson said: “It’s an absolute tragedy that Brexit made so many of our European friends and family members feel so horribly rejected. We were a country that many people saw as so open-minded and so welcoming and somehow in a short space of time we’ve turned into an insular, unwelcoming country.

“The mayor is responsible for setting up the cultural and artistic tone of this city and we push back on that horrible development, we can say London is open to everyone, we are here to find out about your stories, we want to know about your culture.

“We can do that through artistic festivals and events for example. We can be open and welcoming even though the rest of our country has decided to shut down.”

Hewison said: “One thing I do hope the message that European citizens in London are getting from this is that every single candidate who’s graced us to turn up is on your side in this election. London is your home, you are welcome here, we will make sure that you stay welcome here.

“I am really worried about the 30th June deadline for Settlement Status. I am really concerned about the backlogs of paperwork that are happening and I do not want to see the sight of our neighbours, our friends in fear of being evicted from their properties and expelled from their country. We absolutely have to challenge that deadline and I think the mayor of London has to put pressure on central government to do exactly that.”