Heavy downpours in Cumbria could make it difficult for some to reach COP26. 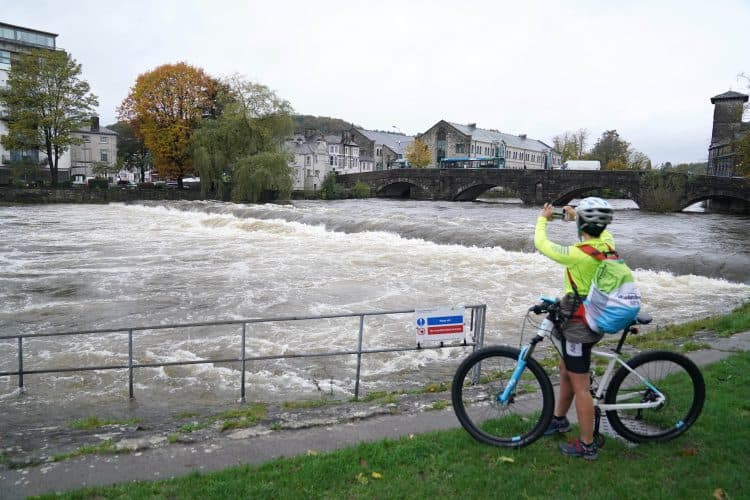 Heavy rain has battered Cumbria, with reports of homes being flooded and disruption to rail travel – just as thousands head through the area to reach Glasgow for COP26.

The Met Office has issued an amber warning, indicating medium risk, which will be in place until Friday.

Honister Pass in the Lake District has witnessed more than a foot of rain in 36 hours and some roads – including the A591 between Rydal and Grasmere – have been flooded.

Cumbria Police has advised people to travel only if necessary.

Stewart Mounsey, the Environment Agency’s flood risk manager for Cumbria, said: “Sadly we are seeing some properties being flooded, it’s only a handful at the moment, but that’s obviously devastating for those involved.

“We’re still gathering the number of those and locations.”

Worryingly, the heavy rain has already caused disruption to cross-border rail service, with Avanti West Coast advising passengers not to travel from stations in the north-west of England and Scotland before Friday.

Rail operators warned that the upheaval could last until the end of next week.

Network Rail said anyone planning to travel between Glasgow or Edinburgh and Carlisle should only travel if absolutely necessary.

“Slowing trains down will means drivers will be better able to halt their train when a problem is spotted.”

“The conditions could potentially bring disruption to the trunk road and rail networks, so it’s important people plan their journeys before they set off,” he said.

It comes as Rishi Sunak was forced to defend cutting domestic flight taxes in the run-up to COP26, after being accused of going “headlong in the wrong direction”.

Labour said it was an “astonishing” announcement in Wednesday’s Budget, given the UK is set to try and convince world leaders to speed up decarbonisation plans in their own countries.

The Chancellor halved the tax on domestic flights, which are cheaper and significantly more polluting than train journeys, marking a tax giveaway of £30 million a year.

“What we’re doing on air-passenger duty is going back to a system we used to have, which means we don’t essentially double-tax people for flying inside the UK – so in that sense it’s a pro-union policy,” Sunak told BBC Radio 4’s Today programme on Thursday morning.

Rachel Reeves, who stood in for Keir Starmer in the Commons on Wednesday, said: “We wouldn’t have gone ahead with that cut.

“I find it astonishing that the week before Cop26, when we are supposed to be showing global leadership, we have cut air-passenger duty on domestic flights. We should be encouraging people to use our train network for those journeys, not cutting APD on domestic flights.”

She added: “If you’re a banker on a short-haul flight sipping champagne, you would have been cheering at the budget yesterday. If you’re on a modest income and you’re worried about the rising cost of living, frankly there was very little to cheer.”