The government had promised to match lost EU funding for deprived areas - but Rishi Sunak had other ideas. 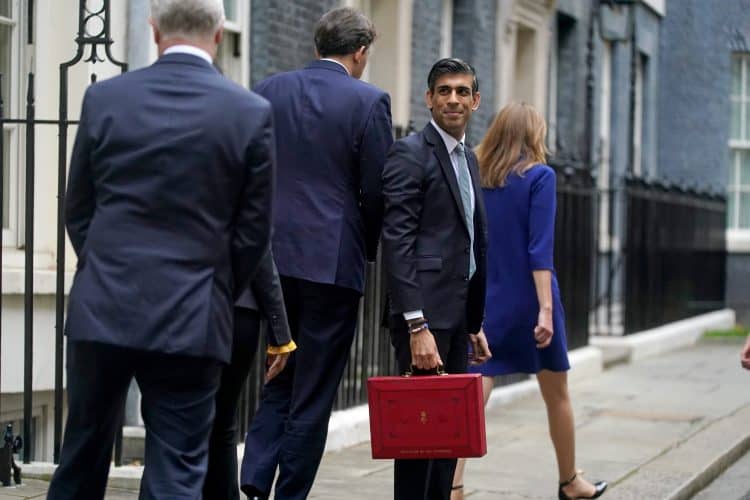 Chancellor of the Exchequer Rishi Sunak holds his ministerial 'Red Box' as he stands with his ministerial team and Parliamentary Private Secretaries, outside 11 Downing Street, London, before delivering his Budget to the House of Commons. Picture date: Wednesday October 27, 2021.

Nearly £2 billion has been slashed from pledged development spending in poor parts of the UK, despite Boris Johnson’s promise to “level up” the country.

The government had promised to match lost European Union funding, to “tackle inequality and deprivation” – which would have required at least £4.5 billion.

But the small print of Rishi Sunak’s Budget reveals that just £2.6 billion has been allocated, a move likely to provoke ire in ‘Red Wall’ areas of England, as well as Scotland and Wales.

And it has emerged that the impact of Brexit on the UK economy will be worse than that caused by the pandemic, according to the chairman of the UK fiscal watchdog.

Richard Hughes said the Office for Budget Responsibility (OBR) had assumed leaving the EU would “reduce our long run GDP by around four per cent”, adding in comments to the BBC: “We think that the effect of the pandemic will reduce that (GDP) output by a further two per cent.”

“In the long term it is the case that Brexit has a bigger impact than the pandemic”, Hughes told the broadcaster hours after the OBR responded to Rishi Sunak’s latest Budget by saying it expected inflation to reach 4.4 per cent while warning it could hit “the highest rate seen in the UK for three decades”.

Rebecca Evans, the Welsh government’s finance minister, hit out at “clear gaps in funding where the UK government should be investing in Wales”.

“Arrangements for replacing EU structural funds remain unclear, but what we do know is it falls well short of the £375m we were receiving – these are funds that support skills, businesses and decarbonisation.”

The long-awaited UK Shared Prosperity Fund had already attracted significant criticism, after it was initially delayed until next year – costing poorer places as much as £1.5 billion.

It adds that funding will only “rise to £1.5 billion a year by 2024-25”, and says it must now pay for “a new UK-wide programme to equip hundreds of thousands of adults with functional numeracy skills”.

Sunak did not mention the covert cuts in his Budget speech, in which he claimed the government was “levelling up communities, restoring the pride people feel in the places they call home”.

“For too long, far too long, the location of your birth has determined too much of your future,” the Chancellor added.