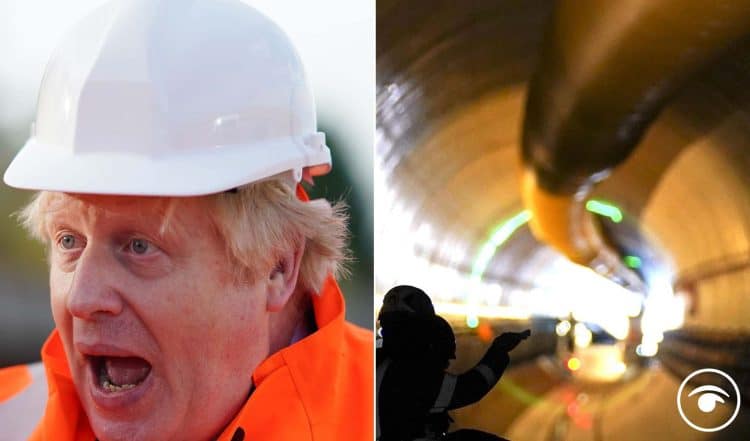 Generations of northerners risk being consigned to “second class” status because of the Government’s “betrayal” over rail upgrades, Boris Johnson has been warned.

Northern leaders hit out at the downgraded plans for the HS2 high-speed line and the east-west Northern Powerhouse Rail network.

Greater Manchester mayor, Andy Burnham, said the package was a “distinctly second best” option and “the north of England is fed up” with being treated that way.

At a press conference responding to the plans, the Labour mayor said: “This is not politics, this is about the future of the North of England for the next 100 or 200 years – that is the significance of the decisions that are being announced today.

“We are not prepared to consign our grandchildren, great-grandchildren and beyond to being second-class citizens when it comes to transport in this country.

“We have got to fight for better for them and we have to do it together, we have to stand together as one North.

“If Bradford loses, if Leeds loses out, Liverpool loses out, then we lose out as well, and that’s the way we are approaching this today.

“We need the plan that we were promised, a plan that would unlock the northern economy.”

“Betrayal of the North”

The Labour mayor said it was a “20th century upgrade to 19th century infrastructure” rather than the promised new lines.

She said the plan “doesn’t deliver HS2 in full to Leeds, it doesn’t deliver a high-speed line across the Pennines with that crucial city stop in Bradford, it does not support our ambition as northern leaders for a stronger, fairer and better-connected North for all”.

“Whitehall seems not to have listened to northern voices. HS2 will now stop short of Yorkshire and the high-speed Northern Powerhouse Rail will stop at the border. This is not levelling up.”

Liverpool City Region’s mayor, Steve Rotheram, said the North was being offered “scraps off the table”.

In a reference to northerners who switched from Labour to back Mr Johnson in 2019, Mr Rotheram said: “What message does it send to the millions across the Red Wall who lent the Prime Minister their votes in 2019? Perhaps we’ll find out soon.

“It’s the same old story, again and again. If the North had received the same per capita funding as London over the last decade, we’d have had £86 billion more.

“Once again, they have asked us to settle for scraps off the table, a cheap and nasty solution to a problem facing nearly 15 million people across the North, and that’s just not on.”

Related: Victoria Derbyshire asks MP: ‘Why are you betraying the north?’