"Look it was Chris Grayling's first time in charge of the Evergreen trying to navigate the Suez okay." 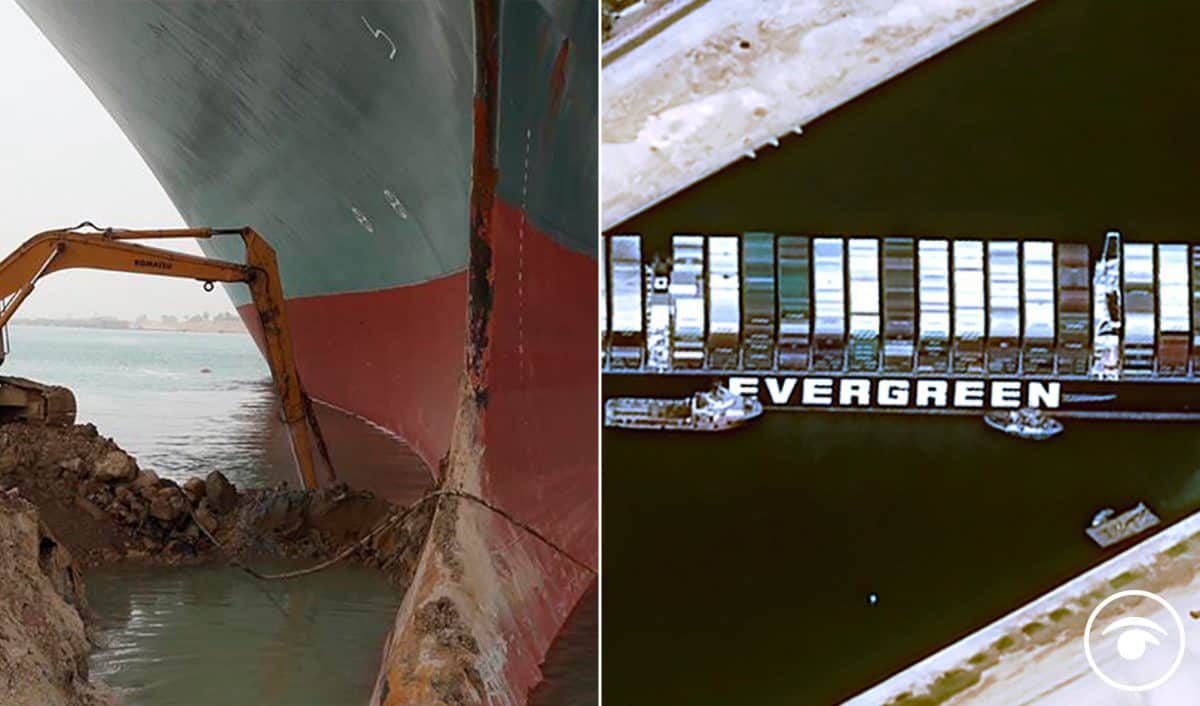 A maritime traffic jam has grown to more than 200 vessels outside the Suez Canal and some vessels began changing course as dredgers worked frantically to free a giant container ship which is stuck sideways in the waterway and disrupting global shipping.

One salvage expert said freeing the EverGiven could take up to a week in the best-case scenario and warned of possible structural problems as it remains wedged.

The Suez Canal Authority welcomed international offers to help free the vessel, including one from the US, although it did not say what kind of assistance was offered.

The EverGiven, owned by Japanese firm Shoei Kisen KK, got wedged on Tuesday in a single-lane stretch of the canal, about four miles north of the southern entrance, near the city of Suez.

The vessel remained grounded on Friday, said Leth Agencies, which services the canal.

Tugboats and a specialised suction dredger were trying to dislodge it as Egyptian authorities prohibited media access to the site.

In addition to more than 200 vessels waiting near the canal, over 100 ships more were en route to the waterway, according to data firm Refinitiv.

Apparently anticipating long delays, the owners of the stuck vessel diverted a sister ship, the EverGreet, to head around Africa instead, according to satellite data. Others are also being diverted to avoid the canal.

About 10% of world trade flows through the canal, which is particularly crucial for the transport of oil. The closure also could affect oil and gas shipments to Europe from the Middle East.

Captain Nicolas Sloane, a maritime salvage expert who led the high-profile effort to salvage the cruise ship Costa Concordia in 2012, said extracting the EverGiven is “quite a challenge” and could take five days to a week.

The EverGiven’s location, size and large amount of cargo make the operation more complex, Capt Sloane said. The operation should focus initially on dredging the bank and sea floor around it to get it floating again, rather than unloading its cargo, which could take weeks.

That’s because the clock is also ticking structurally for the vessel, he added.

“The longer it takes, the worse the condition of the ship will become, because she’s slowly sagging,” said Capt Sloane, vice president of the International Salvage Union. “Ships are designed to flex, but not to be kept at that position with a full load of cargo for weeks at a time. So it’s not an easy situation.”

The backlog of vessels could stress European ports and the international supply of containers, already strained by the coronavirus pandemic, according to IHS Markit, a business research group. It said 49 container ships were scheduled to pass through the canal in the week since the EverGiven became lodged.

Satellite and photos distributed by the canal authority show EverGiven’s bow touching the eastern wall, while its stern appeared lodged against the western wall.

A team from Boskalis, a Dutch firm specializing in salvaging, is working with the canal authority, with efforts focusing on dredging to remove sand and mud from around the port side of the bow.

It was not immediately clear what caused the EverGiven to get wedged, although the canal authority blamed bad weather. GAC, a global shipping and logistics company, said the ship had experienced a power blackout, but it did not elaborate.

Evergreen Marine Corp, a major Taiwan-based shipping company that operates the ship, said the EverGiven had been overcome by strong winds as it entered the canal from the Red Sea, but that none of its containers had sunk.

Today’s Comic: We are all, in our own little way, that ship. pic.twitter.com/GVDjLxzErX

the situation in the Suez Canal has escalated pic.twitter.com/a5UVNmuGe7

Even though it's late, I had to create this meme. Here we go.. 2021 #Evergreen #SuezCanal #Ship pic.twitter.com/dkHTnSKKYL

look it was Chris Grayling's first time in charge of the Evergreen trying to navigate the Suez okay pic.twitter.com/UbCJztMt2u