She tweeted about a billionaire with 'an ego problem...' 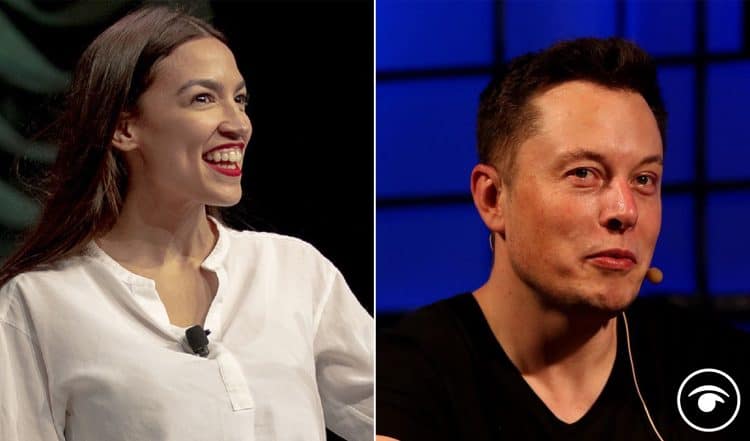 Alexandria Ocasio-Cortez took exception to Musk’s claim that the ‘far left’ had taken over the Democratic Party in recent years after he posted a graphic showing what he saw as the straying of the party left since 2008.

It then led to a cringeworthy exchange between Musk and AOC, which owned the new twitter owner.

He tweeted this meme that calls out the radical drift of left-wing politics in America.

In response, Alexandria Ocasio-Cortez wrote: ‘The extreme left is taking over WHERE,’.

‘In Texas, Republicans passed a law allowing rapists to sue their victims for getting an abortion. Can anyone name a “far left” policy that extreme implemented anywhere? We can’t even get our party to import cheaper RXs from Canada. foh.’

Then Alexandria Ocasio-Cortez tweeted: ‘Tired of having to collectively stress about what explosion of hate crimes is happening bc some billionaire with an ego problem unilaterally controls a massive communication platform and skews it because Tucker Carlson or Peter Thiel took him to dinner and made him feel special.’

Never one to make it all about him Elon Musk then replied: “Stop hitting on me, I’m really shy.”

AOC later replied to Musk’s dig by claiming she was actually referring to Facebook and Instagram owner Mark Zuckerberg.

She wrote: ‘I was talking about Zuckerberg, but ok,’ then deleted the tweet a minute later.

Elon Musk has sold 4.4 million shares of Tesla stock worth roughly 4 billion US dollars (£3.2 billion) – most likely to help fund his purchase of Twitter.

Musk reported the sale in a filing with the Securities and Exchange Commission on Thursday.

The world’s richest man, the CEO of Tesla, said in a tweet he does not plan any further sales of the company’s shares.