Ukrainian President Volodymyr Zelensky said he welcomed Western sanctions but they “are not enough” to end the Russian aggression, calling for a full trade embargo. 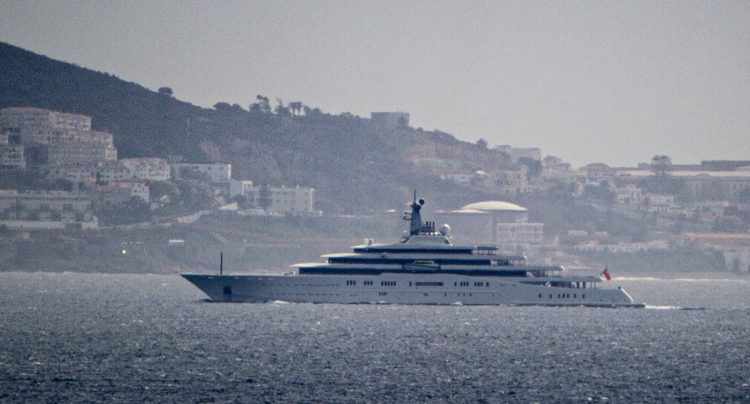 This is the moment Roman Abramovich’s £537m yacht slipped within just two miles of British territorial waters amid the billionaire oligarch’s flee from sanctions.

The UK sanctioned him last week over allegations the steel company he controls has supplied the Russian army.

Now the EU is sanctioning him over claim his cash is contributing to the nation which is bombing Ukraine.

His 533ft boat Eclipse, reportedly worth £537million, left the Caribbean island of St Martin last week and is pictured here entering the Straits of Gibraltar on Saturday (12).

His superyachts – Solaris and Eclipse – are believed to be heading for Turkey.

Sanctions have been announced against a further 350 Russian individuals and entities in measures designed to hit the Kremlin following the invasion of Ukraine.

The Government announced on Tuesday that 350 new listings had been made under the Russia sanctions regime.

It is understood the new additions will bring the UK in line with restrictive measures already announced by the European Union.

Earlier, Ukrainian President Volodymyr Zelensky said he welcomed Western sanctions but they “are not enough” to end the Russian aggression, calling for a full trade embargo.

Boris Johnson, who was hosting a meeting of the Joint Expeditionary Force nations in London which was addressed by Mr Zelensky via video-link, said: “I hear your point very loud and clear about the economic sanctions that we need to tighten, where we need to go harder on the banks, on Swift.”

Further general economic sanctions were also announced on Tuesday, with the export of high-end luxury products to Russia being banned and import tariffs hiked on hundreds of goods, including vodka.