Specialists working at Grenfell Tower have made 87 ‘recoveries’ of human remains in the tower – but warn that could mean more than 87 separate people. More than 250 investigators are still working at the scene, and will have to comb through over 300 tonnes of debris in the burnt-out shell of the tower to […] 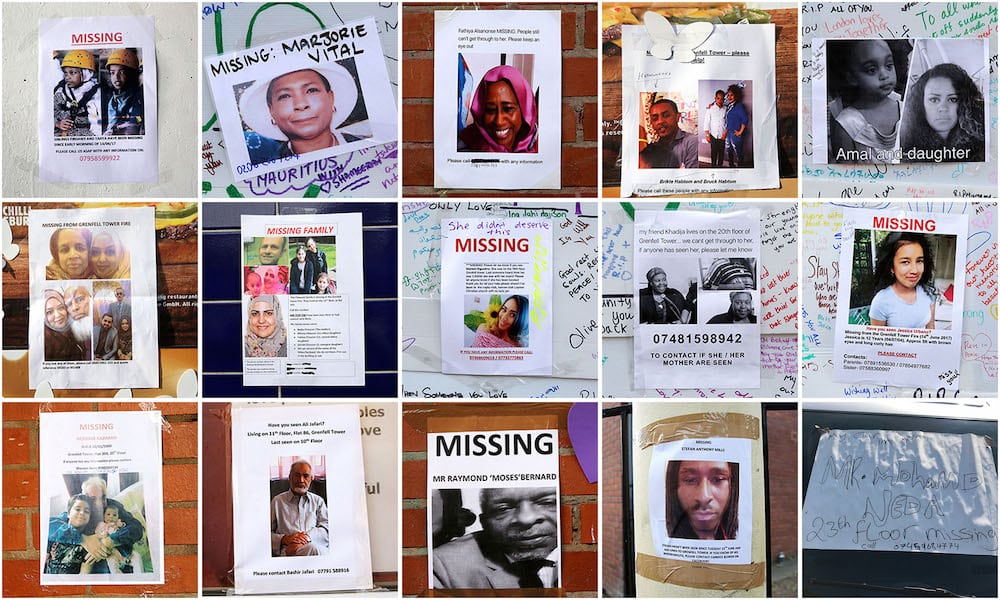 A montage of missing posters put up after the fire in Grenfell Tower, West London. June 16 2017. FILE PHOTO. See National News story NNTOWER: Specialists working at Grenfell Tower have made 87 'recoveries' of human remains in the tower - but warn that could mean more than 87 separate people. More than 250 investigators are still working at the scene, and will have to comb through over 300 tonnes of debris in the burnt-out shell of the tower to find what is left of the victims. Police say 21 people have been formally identified, but it could take until the end of the year to have an accurate number of victims. Last night, families of those who died or are missing and presumed dead met with key members of the Metropolitan Police and the Senior Coroner, Dr Fiona Wilcox.

Specialists working at Grenfell Tower have made 87 ‘recoveries’ of human remains in the tower – but warn that could mean more than 87 separate people.

More than 250 investigators are still working at the scene, and will have to comb through over 300 tonnes of debris in the burnt-out shell of the tower to find what is left of the victims.

Police say 21 people have been formally identified, but it could take until the end of the year to have an accurate number of victims.

Last night, families of those who died or are missing and presumed dead met with key members of the Metropolitan Police and the Senior Coroner, Dr Fiona Wilcox.

Commander Stuart Cundy, who is overseeing the Met’s response to the fire said: “At the very heart of our investigation, and all our work, are those who died in the fire and our efforts to support those who have been bereaved.

“It is vitally important that families and loved ones are engaged and know what we are doing and why. We will continue to involve families throughout the investigation.

“I completely understand their desire for answers and we are committed to providing as much information we can, as soon as we can.

“Now I can update on the progress of our search and recovery operation inside Grenfell Tower, which we estimate will not be complete until the end of 2017.

“On Monday, we forensically recovered the last of the visible human remains from Grenfell Tower and transferred them to Westminster Mortuary.

“In total we have made 87 recoveries, but I must stress that the catastrophic damage inside Grenfell Tower means that is not 87 people. “Until formal identification has been completed to the Coroner’s satisfaction I cannot say how many people have now been recovered.

“A total of 21 people who died have been formally identified by the Coroner and their families informed.”

Detectives are continuing to appeal for information about who was in Grenfell Tower on the night of the fire, who escaped and survived and those people who have been missing since the night.

It is thought many tenants could have been subletting their homes, but the government have offered legal protection in return for information.

Commander Cundy added: “Work continues using all available techniques, supported by experts and specialists, to identify all those whose remains we have recovered.

“Specialist officers, supported by expert anthropologists, have started a search by hand of the devastation left behind by the fire.

“This will involve us meticulously going through about 15.5 tonnes of debris on each floor to find those human remains that are still within the debris inside Grenfell Tower.

“We will use all the information we have, especially what we have been told by survivors and families, to prioritise our search where we believe we may find more human remains.

“This will take us many months, but we will search each and every flat.

“We are absolutely determined to do all we can as quickly as we can to return all those who are in Grenfell Tower to their loved ones. “However, as I’ve said before such is the devastation caused by the fire it may be that tragically we cannot find or identify all those who lost their lives.”

The investigation is one of the largest and most complex in the Met’s history, and detectives are appealing to those people who lived in the tower and may have images of the building’s fire safety features from before the fire to provide them to police.

Residents from the Grenfell Action Group had long claimed that the building was unsafe, and named emergency lighting and a lack of access for emergency vehicles as main concerns.

Due to the high proportion of Muslim residents and the timing of the fire during Ramadan, it has been feared that there may also have been many unknown visitors to the block who have not been identified.

Of the 129 flats, police have spoken to residents of 106 of them, but fear the rest could be dead.

Commander Cundy said: “I do not want there to be any hidden victims of this tragedy.

“We continue our work to build as full a picture as possible of who was inside Grenfell Tower on the night and importantly, those who lost their lives.

“I completely understand the desire for clarity. “We have spoken to at least one person who lived in 106 of the 129 flats within Grenfell Tower and based on what those people have told us we know that 18 people from those flats are dead or missing and sadly, must be presumed dead.

“Tragically, there are still 23 flats where despite our investigative efforts we have been unable to trace or speak to anyone who was in those properties on the night.

“We assume that sadly no one from any of those flats survived. “Until our search operation is complete, I cannot say with any certainty how many people may have been in those flats, as occupiers or visitors, that night.

“If you know of someone who was in Grenfell Tower that night, either living there or visiting, and you know that they are missing please let us know.

“I do not care why you haven’t told us sooner, what is important is that we get all the information we can to identify those who died.”