Hundreds of nearly naked protesters filled the sky with “blood” to highlight the torture of bulls in Pamplona. Ahead of the Running of the Bulls at the San Fermín festival, nearly 100 PETA and Anima Naturalis supporters gathered in the centre of Pamplona today wearing little more than fake bull horns and black underwear with […] 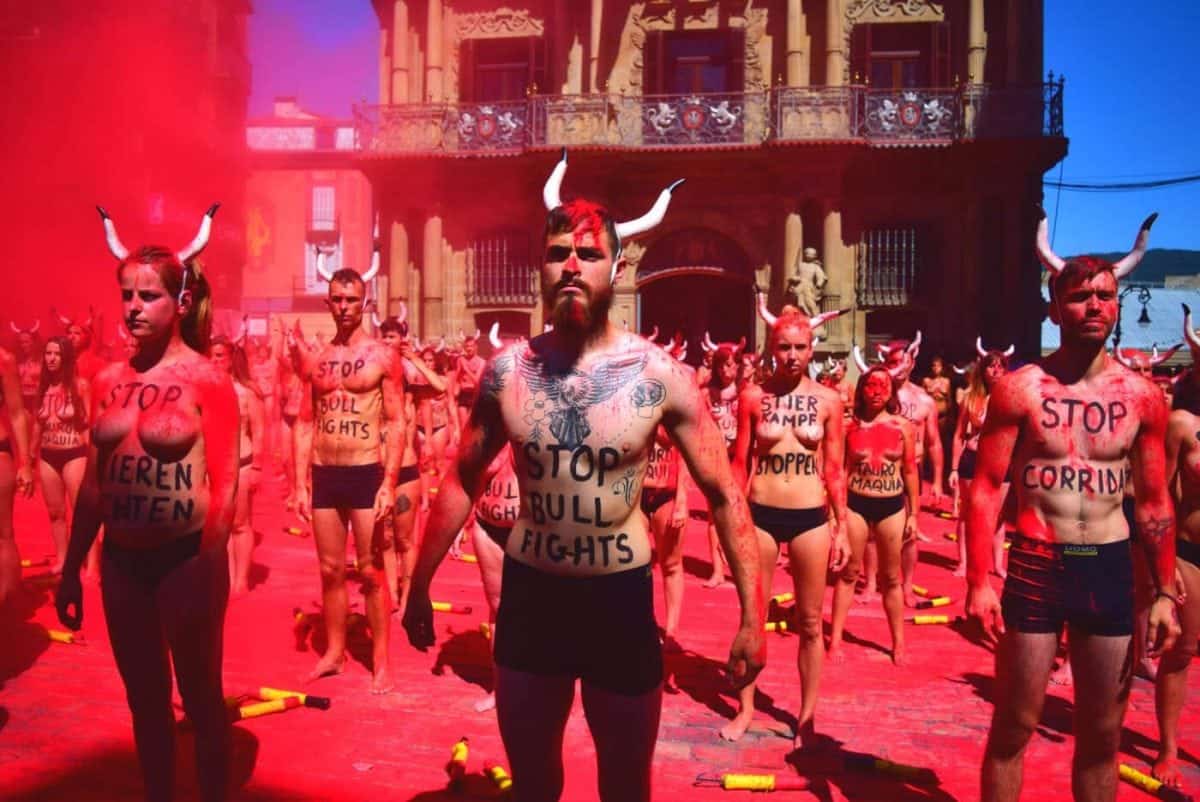 Hundreds of nearly naked protesters filled the sky with “blood” to highlight the torture of bulls in Pamplona.

Ahead of the Running of the Bulls at the San Fermín festival, nearly 100 PETA and Anima Naturalis supporters gathered in the centre of Pamplona today wearing little more than fake bull horns and black underwear with the words “Stop Bullfights” painted on their bodies.

The chanting protesters simultaneously broke “banderillas” containing red powdered paint above their heads, covering themselves and filling the air around them with “blood”. Prior to the Running of the Bulls, electric prods and sharp sticks are often used to torment the bulls.

The animals then slip and slide along the narrow streets, pursued by hundreds of people, before ending up in the bullring. There, as many as eight men taunt, beat, and stab a single bull with daggers and harpoon-like banderillas until he becomes weakened from blood loss.

Then the matador stabs the exhausted bull with a sword, and an executioner cuts the animal’s spinal cord. Many bulls drown in their own blood when the matadors’ aim is inaccurate and the sword pierces the lungs instead of the heart. Often, the animals are paralysed but still conscious as they are chained and dragged out of the arena. “Animals should be respected and protected, not chased by a crowd into an arena to be tormented, speared, and stabbed,” says PETA Director Elisa Allen. “Bullfighting has no place in a civilised society. PETA is calling on kind people around the world to reject this bloody spectacle, and we’re urging Pamplona to join the more than 100 Spanish cities and towns that have banned it.”