Dr Leanne Cheyne, a respiratory consultant at Bradford Royal Infirmary, shared a photo of him in an oxygen mask and hooked up to a ventilator as he fought for his life. 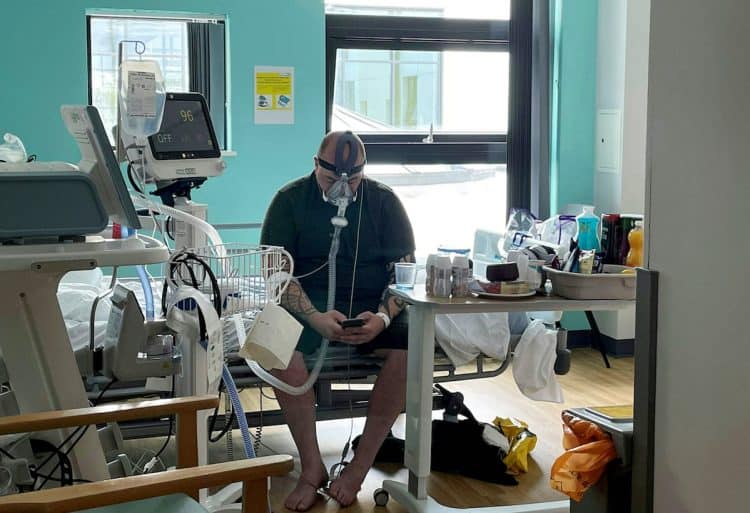 A 34-year-old Covid vaccine sceptic has died just weeks after contracting the virus and confessing in hospital: “I wished I’d had the jab.”

Matthew Keenan told friends he regretted not have the vaccine after he was hospitalised and placed in an induced coma to try to save his life earlier this month.

Dr Leanne Cheyne, a respiratory consultant at Bradford Royal Infirmary, shared a photo of him in an oxygen mask and hooked up to a ventilator as he fought for his life.

Urging others to “grab a jab”, she wrote: “Matthew has agreed for me to share his story. 34, footie coach & dad.

“Self-confessed vaccine sceptic until he caught Covid. If he could turn back time he would.

“Our sickest patients are unvaccinated and under 40. Matthew is fighting for his life.. save yours.”

Father-of-three Matthew, who was described as the ‘life of the party’, shared an image of his positive Covid-19 lateral flow test on July 2.

He said that the symptoms made him feel like he had been ‘hit by a truck’ after suffering from a fever and feeling ‘freezing and red hot’.

The Liverpool fan added that the back pain left him feeling ‘the most poorly I have ever been and I feel like it’s getting worse’.

He ended the post saying he was ‘in bits’ and that ‘Covid is real’.

Tragically, it was confirmed yesterday that Matthew had died.

In a touching tribute, friend of more than 20 years Billy Brown said the world lost ‘the kindest man’.

Matthew was a ‘devoted dad, a fantastic friend, and an unbeatable coach’ according to Billy.

Billy, from Bradford, West Yorks., said: “As he was getting more poorly, he said he wished he had gotten the jab.

“I can’t believe he’s gone, he was the most likeable lad I’ve ever met.

“He had the biggest heart and treated everyone like they were his family.

“There were not many like him. He loved to enjoy himself, he was the life and soul of every party.

“Many people will miss him.”

Billy was left in tears after he learned of his pal’s death as he clung on to hope that he would still make it.

He said that when he first caught the virus everyone believed Matthew would get over it as he was a ‘fighter and a survivor’.

Billy added: “We all thought it was Keenan, he’d get over this.

“Then he got put into a coma, and we were all praying for him. But we thought he was a fighter, a survivor.

“I’m a big strong lad, I’ve lost people before, but I’ve never cried so much as I did today as I did for anyone.”

Related: Watch: Son whose mother compared NHS workers to Nazis says she is ‘beyond help’ and should be prosecuted