by SWNS
in Weird News 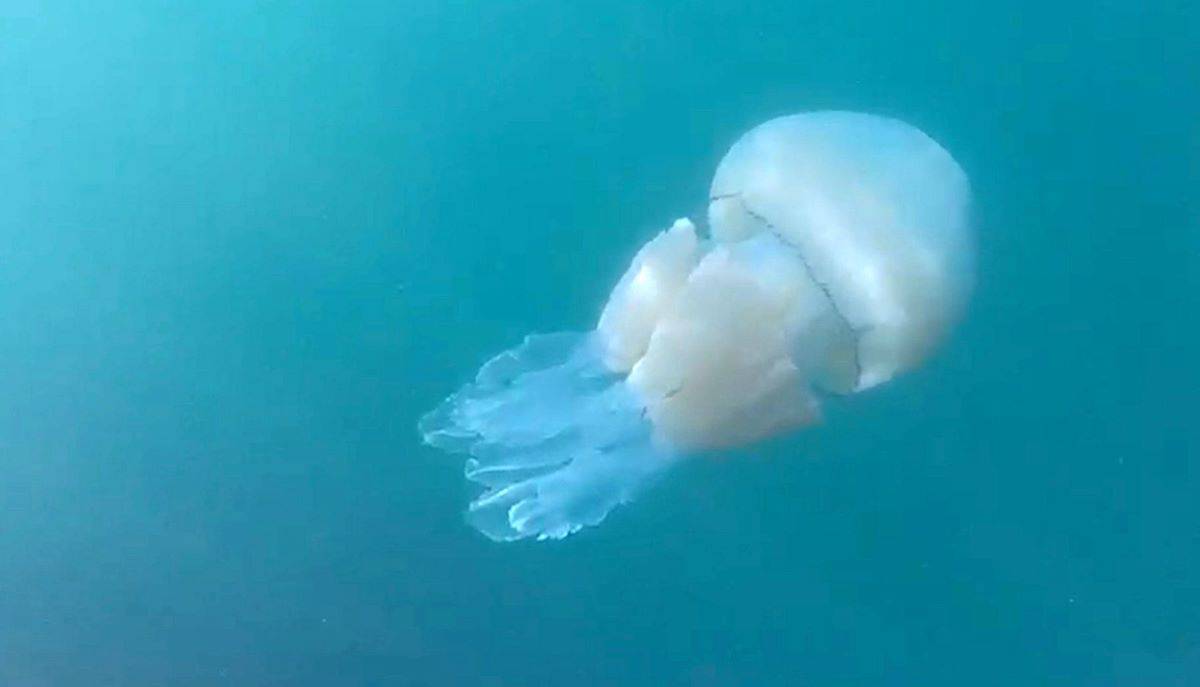 Fears of a monster jellyfish invasion have been raised after a second huge stinger estimated to be 8ft long was caught on camera in British waters.

The first giant barrel jellyfish was spotted on Monday in Falmouth, Cornwall, and dwarfed a diver that was swimming next to it.

And now a second even bigger monster from the deep has been caught on camera – this time in St Austell Bay, Cornwall.

Experts say that warmer weather may be bringing their prey into British waters and an invasion could be imminent just as crowds of tourists prepare to flock to the coast for the summer holidays.

The latest video was captured by a member of the Fowey Shellfish Company while checking equipment, who said they scarpered when they spotted the jellyfish which witnesses say was more than 8ft long.

Will Hancock, 35, owner of the Fowey Shellfish Company, said: “I get in the water sometimes to look at our site and out the corner of my eye I saw some thing that was bigger than me.

“It was at least 8ft long and probably 4ft wide. It was the biggest one I’ve ever seen.

“It’s probably because of what they feed on, that’s why they’re getting so big. They’ve got so much to feed on that growing quite large.

“They’re becoming more abundant, people are catching them in their trawlers. We’ll see a lot more of them, absolutely.

“I wouldn’t even say we’ve seen the biggest yet, they’ll keep coming in August and September because they like the warmer weather.

“Where this one was swimming it was much warmer than below, they’re coming up to the surface where it’s warmer.

“We see them regularly but I’ve never seen one as big as that.”

Dave Swiggs, 33, a director of the company, said: “It was the owner who spotted it, he was doing an inspection of the muscle lines and it was there beneath him.

“He said it was about as big as him, probably six or seven feet. It was massive, he was careful about getting too close to it – he’s not a fan of jellyfish at the best of times.

“We’ve seen more large jellyfish this year as the weather has got hotter, maybe the sunshine has brought bigger ones into the South West.”

Dr Victoria Hobson, a marine ecologist who specialises in barrel jellyfish with ‘ten years experience’, said: “There’s lots out there, there’s not just one or two of them.

“I’ve been working on barrel jellyfish since 2008 and we’re seeing more of them now because the water is clear and flat.

“There are lots of sunfish around at the minute and they eat them, the sun fish like the warmer weather.”

Dr Hobson said that the barrel jellyfish usually grow to around 1m in length, about the same size as a black bin and weigh around 30 or 40kg.

She added: “They do have a sting but it’s quite mild, it’s like a nettle sting – I would highly recommend you don’t go hugging them though.”