The slippery serpent was first spotted by frightened youngsters in the grounds of the school in Basingstoke, Hants

by Steve Beech
in Weird News 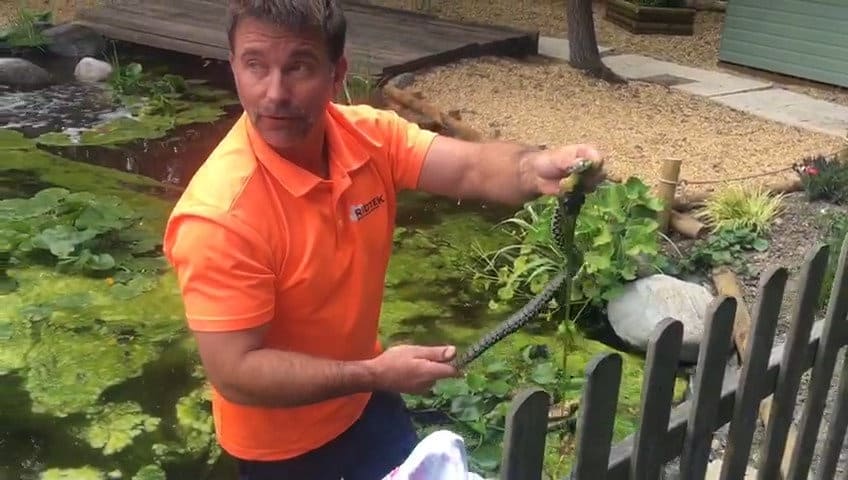 Worried teachers had to call in an Aussie pest control expert to flush out an elusive three feet long SNAKE terrifying a primary school.

The slippery serpent was first spotted by frightened youngsters in the grounds of the school in Basingstoke, Hants.

Aussie bred pest controller Shane Jones, 50, was called in to track down the snake.

But after two visits to the school when the pupils had gone home and no sightings, the man from Down Under began to think the children had imagined seeing the snake.

However, Shane was called back to the scene last Friday after receiving a call from the school’s caretaker who said he had the snake locked in his sights.

By the time he arrived the snake had slipped away again, this time taking shelter in the school pond.

He said: “It had gone into the water and was showing its head.

“I took off my boots and socks and waded through the water.

“I felt around and managed to get hold of it very carefully.

“It was very relaxed, and not aggressive at all.

“I could tell it was a barred grass snake from the bars on its body.

“I’m pretty sure it was a female too because it was around a metre long, much longer than the males.

“And grass snakes are non-venomous so there was no danger.”

The moment Shane finally captured the female snake was captured on video and posted to YouTube.

Shane – a UK resident of 12 years and known in the Basingstoke area as ‘the Aussie’ – can be heard saying ‘I think I got her, mate’ in reference to his late compatriot and fellow animal lover Steve Irwin, who was killed by a stingray.

Shane, who runs his company in Basingstoke with his wife Roo and two sons, gained permission from the Department for Environment, Food and Rural Affairs (DEFRA) and Basingstoke Council before handling the protected and endangered snake.

He added: “We often get calls from homeowners who have spotted grass snakes in their garden.

“But we can’t do anything about them because they’re protected, so we just tell people to wait until they move on.

“But on this occasion it was in a very busy spot with lots of kids running around, so they let us deal with it.”

After capturing the rare water-loving snake, Shane released her in a secluded stream a couple of miles away.

The head teacher asked for the primary school to remain anonymous to avoid alarming nervous parents.

Shane added: “As you can imagine, if one kid spots a snake the whole school knows about it pretty quick.

“The teachers were trying to keep it on the low-down, so we only turned up once the kids had gone home. Otherwise, it would have been absolute pandemonium.

“I’m an Aussie so I’ve dealt with quite a few snakes before, but it’s the first time I’ve been called out to a school.

“I’ve mostly been dealing with wasp nests this summer until now. You really never know what the next call would be in this job.”

The barred grass snake, or Natrix helvetica, is found all over Western Europe and is the longest of the UK’s four native species.

The grey snake common to lowland areas of southern England lives in and close to water and eats frogs, toads and newts.