The bizarre scam letter, full of spelling errors, pretended to be an urgent recall on cash cards. 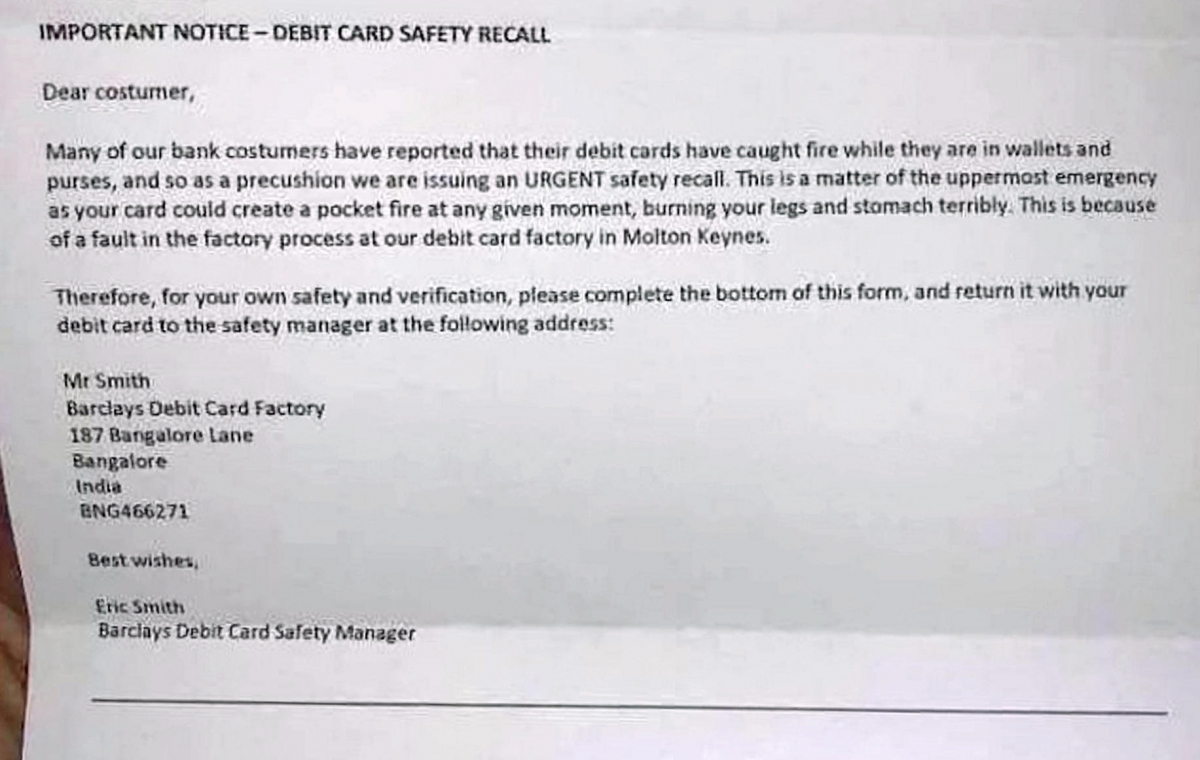 Police have ridiculed the “worst scam ever” after fraudsters sent letters to people warning them about debit cards which could EXPLODE in their pocket.

The bizarre scam letter, which is full of spelling errors, urged people to send their cash cards to an address in India, along with PIN numbers “for verification porpuses (sic) only.”

It informs them their cards could spontaneously combust causing a pocket fire which could burn their “legs and stomach terribly.”

This, they claim, is due to a problem with the production process at their factory in “Molton Keynes”.

It asks people to return their credit card with personal details as a “precushion” back to “safety manager” Eric Smith, of the Barclays Debit Card Factory, in Bangalore, India.

Cheshire Police shared the letter on Twitter and branded the fraudster’s efforts as the “worst scam ever.”

The letter was sent to residents in Cheshire telling them there had been an urgent recall on their debit cards.

They wrote: “This letter from ‘Mr Smith’ at ‘Barclays’ is warning people about Spontaneous Debit Card Combustion…

“We would usually tell people to #TakeFive before giving out their bank details.. I don’t think we need to for this one #WorstScamEver.”

Cheshire residents were quick to mock the letter. Paul Wright said: “Trying to work out where ‘Molton Keynes’ is.”

Karl Steenson added: “Apart from anything else, the spelling mistakes should act as a warning to anyone receiving the letter.”

Fordy added: “It’s not from my ex wife is it, I’ve never known a force greater to man that could burn through a credit card that fast”