A council worker has finally received £20 in compensation from Natwest – TEN YEARS after mistakenly leaving the cash in an ATM machine. Steve Titman, 34, walked away from the cash machine in Peterborough, Cambs., without taking the money in early 2008. He was astonished to be sent a cheque for the amount last week […] 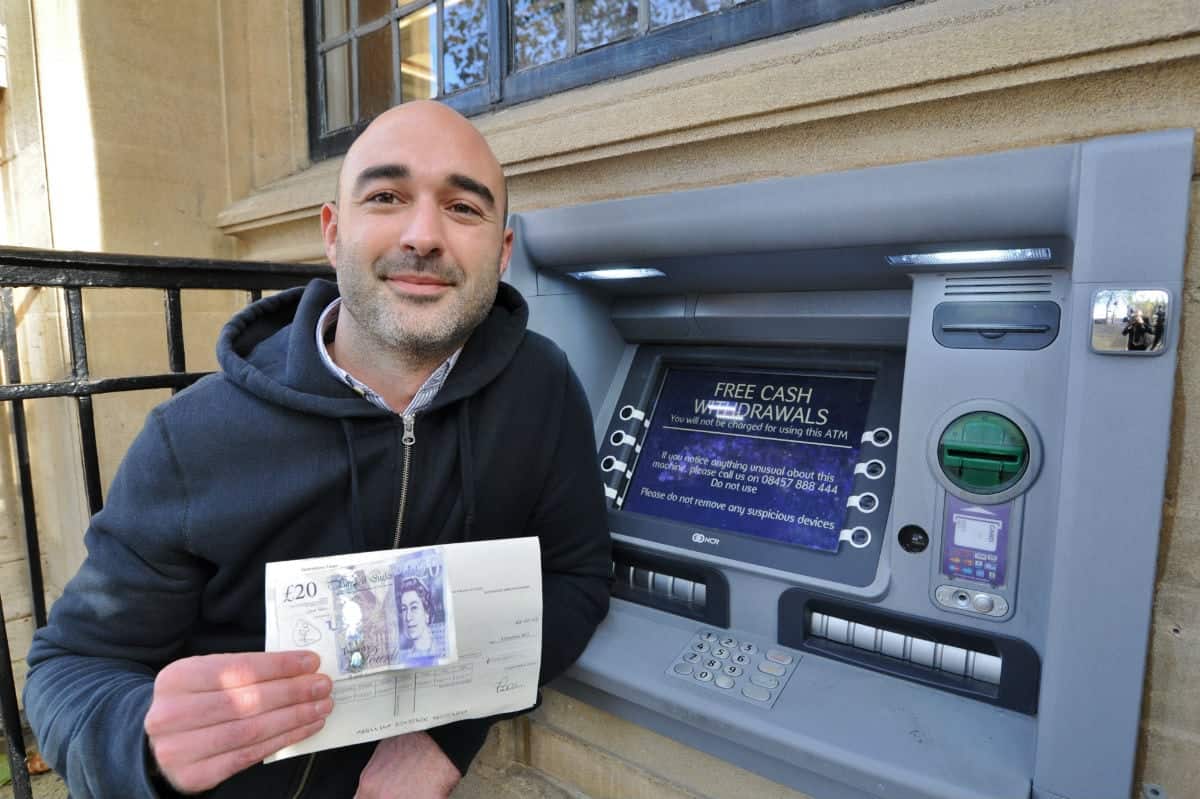 A council worker has finally received £20 in compensation from Natwest – TEN YEARS after mistakenly leaving the cash in an ATM machine.

Steve Titman, 34, walked away from the cash machine in Peterborough, Cambs., without taking the money in early 2008.

He was astonished to be sent a cheque for the amount last week – along with £6.80 interest which has added up over the past decade.

Steve said: “It was a complete shock but very welcome. I will be putting it towards my Christmas shopping.

“Obviously I have no recollection of leaving the money in the cashpoint.

“I think I was most surprised that this dated back to 2018, it was a Friday when I was a bit younger and probably went out on the town a bit more.

“I have to say thank you to NatWest for checking my records.”

Money from ATMs automatically goes back into the machine if it is not collected.

Back in 2012, RBS and HSBC carried out a similar refunding scheme to Lloyds after it changed its policy so that customers who did not pick up th emoney from an ATM had it automatically refunded into their accounts.

Both banks decided to reimburse customers dating back to January 2005, at an estimated cost of a combined £18m.

Now, Lloyds is refunding people who did not pick up the correct amount of money from its ATM machines, with the number of people affected reported to be in the thousands.

Steve, who works for Peterborough City Council, admits he was frustrated that the money had never been returned to his account in 2008.

He said: “I always thought that if you left cash in a cashpoint and you did not take it out, it went back into your account.

“I’m a bit annoyed it was not credited to my account, but happy to get a windfall in time for Christmas.

“I have never heard of this before. I’m interested to know if anyone else had an unexpected withdrawal from leaving money in a cashpoint several years before.”

Steve’s bank account is with NatWest, but the money was reimbursed to him from Lloyds.

A letter he received from Natwest stated: “Lloyds has undertaken a review of its historic ATM (cash machine) withdrawals and identified occasions where NatWest Bank customers, at the time, did not take all the cash from the ATM.

“To put things right we are arranging, on behalf of Lloyds, for the amount of the withdrawal(s) to be refunded to you.

“Interest had been added to the amount of the withdrawal from the date of the ATM transaction so you’re not out of pocket.”

A spokesman for Lloyds said: “We made payments to a number of banks whose customers we identified as experiencing, and not being previously reimbursed for, a cash retract at one of our ATMs between January 1, 2006, and March 31, 2011.

“We have made a payment to Mr Titman as we have identified that he was not previously reimbursed for a cash retract at one of our ATMs.

“We apologise for this and have given him a compensation payment in addition to the retract amount.”