Andrew Taylor, dressed in a costume made of burrs from the burdock plant, will parade around South Queensferry, West Lothian as part of the annual ritual

by Ben Williams
in Weird News 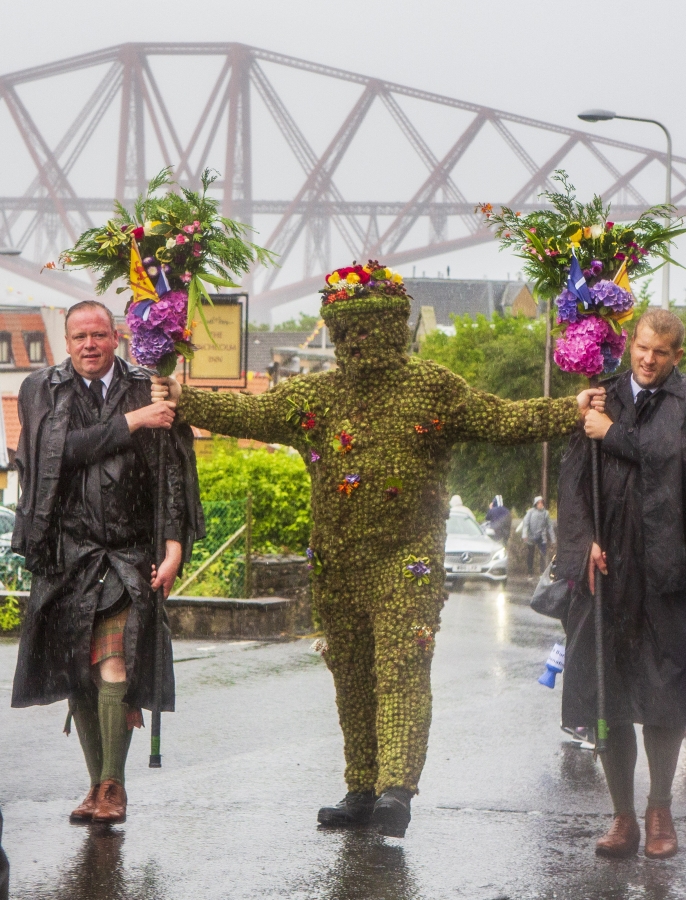 These astonishing pictures show folk character the Burryman covered head to toe in more than 7,000 sticky plant heads – to ward off evil spirits as part of a historic parade.

As part of the 900-year-old tradition, the Burryman will walk a seven-mile route through South Queensferry, West Lothian, today (Fri).

Council worker, Andrew Taylor, 37, has played the role of the Burryman for the last eight years – despite admitting he was afraid of the figure when he was a child.

Andrew is guided through the town by two helpers as the stickiness of his costume leads him to walk awkwardly, with his legs wide apart and arms held out sideways.

In the lead up to the annual festival, Andrew and his team collect the burr heads needed to make the costume, with many taken from the Dalmeny Estate, West Lothian.

Around 50 A4 sized patches are made from the plant heads which are then stuck on to his top, long johns, and a hat that protects his head.

As part of the historic tradition, Andrew is given nips of whiskey along the way by fans who turn out to see the spectacle – and can drink up to 25 during the parade.

Andrew set off at 8.45am with wife Claire, 38, by his side and hopes to finish the route around 6pm tonight.

“But he has done this for eight years now so it will not stop him.

“The forecast is to brighten up later on.

“He was so excited and nervous to do this but the South Queensferry community love the Burryman.

“I am so proud of him. There is a whole team there to support him too.

“He has to keep his arms straight because if he drops them he might struggle to get them up again because the suit is really sticky.

“He has to drink from a straw because he can’t hold a glass.

“People run over to him and put the glass to his mouth so he can sip the whisky.

“His favourite is Jura whisky.

“He has never needed to go to the toilet while doing this.

“The meaning behind it is to show good spirits and take the bad spirits away.

“Andrew loves being the Burryman.”

Local Mary Hamlin, 82, has headed out to see the Burryman every year since 1958.

She said: “I come out every year and just give him whisky.

“I’ll keep doing it as long as I can.

“The weather is rotten but it’s not stopping anybody.”