A rider with a hunt caught on camera whipping a protester with her crop SEVENTEEN TIMES could face a private prosecution after police said she wouldn’t be charged. Shocking footage of the incident went viral in November after it appeared to show the rider whipping the saboteur who had grabbed her horse’s reins. Cries of […] 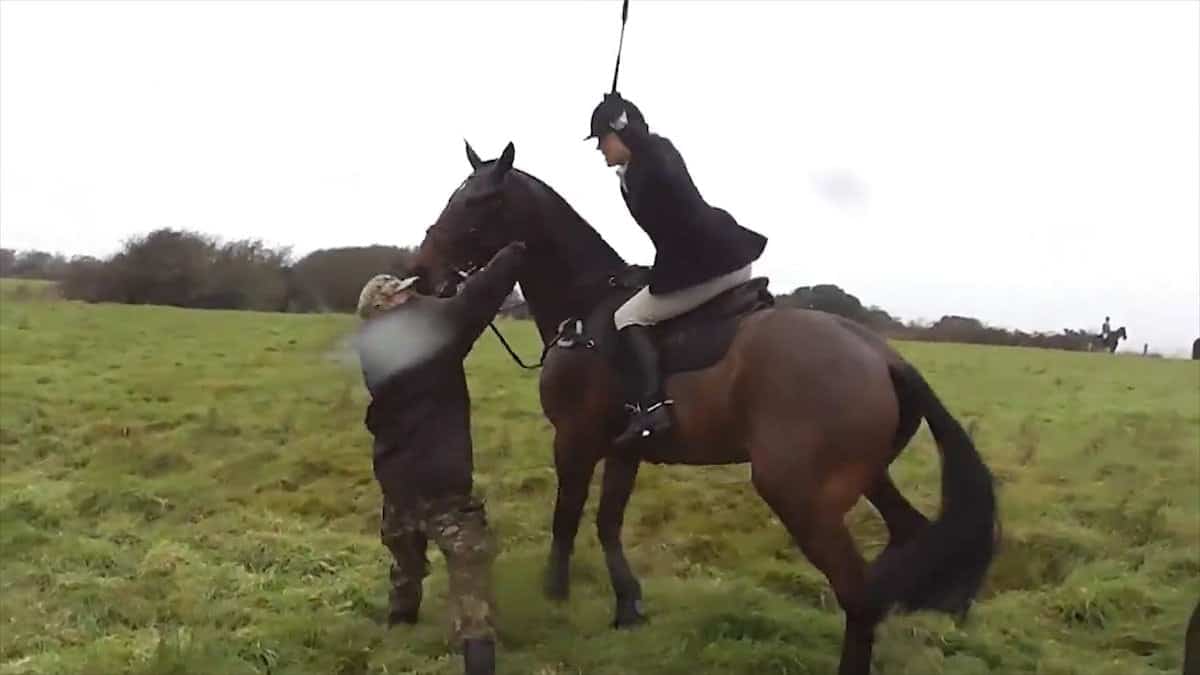 A rider with a hunt caught on camera whipping a protester with her crop SEVENTEEN TIMES could face a private prosecution after police said she wouldn’t be charged.

Shocking footage of the incident went viral in November after it appeared to show the rider whipping the saboteur who had grabbed her horse’s reins.

Cries of ‘Let go!’ and ‘Get off the horse!’ can be heard, while others shouted for the woman to stop using her mount ‘as a weapon’ in Herstmonceux, East Sussex.

But the Brighton Hunt Saboteurs group and their supporters have been left fuming after Sussex Police confirmed officers would not be taking further action against the woman, who is believed to be a member of East Sussex and Romney Marsh Hunt.

A Brighton Hunt Saboteurs spokesman said: “She should be prosecuted as she was trying to ride people down, then when a saboteurs took her reigns to try and calm the situation she attacked him with her whip.

“It was a blatant assault.

“We weren’t shocked by the police’s decision not to continue the case as we are used to them continually siding with the hunt.

“They refuse to even investigate hunts that we see blatantly hunting every week.

“Saboteurs are continually assaulted and attacked by hunt supporters and the police refuse to do anything about it.

“When the hunt want a saboteur arrested, the police jump straight on it though.”

He added: “We are exploring what legal options are open to us at the moment.

“We are looking at pursuing a private prosecution of the rider or suing the East Sussex and Romney Marsh hunt.

“Their aggression and violence only makes it clear that hunting is a dying blood sport and make us more determined to keep exposing their cruel activities.”

In a second video captured by the same group on November 18, the female rider appears to approach the camera person and tell them to ‘get back on the road’.

When another saboteur approaches her horse she appears to strike him with her whip, saying ‘get off my horse’.

South Coast Hunt Sabs, an umbrella protest group, is now hoping to raise £5,000 to launch its own court action against the rider.

A Sussex Police spokesman said: “No further action will be taken against a horse rider who was captured on video striking out at a man who had grabbed the reins of her horse.

“The video, along with another provided to police, shows the incident and events leading up to it near Herstmonceux on November 18.

“The woman and four witnesses were interviewed, but these and the evidence supplied did not support a prosecution.”